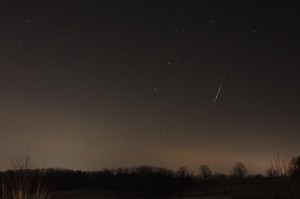 EarthSky Facebook friend DAnny Crocker-Jensen said: Yea, I caught one!!! :-) You can see the Big Dipper’s handle and half of its bowl. The bowl is towards the top and the handle is hanging down. The open part of the bowl is facing towards the left. Quadrantid Meteor. 1-4-13.

Thank you! Your submission has been received!
Oops! Something went wrong while submitting the form.
END_OF_DOCUMENT_TOKEN_TO_BE_REPLACED