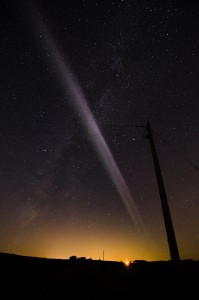 Tim Abraham
E-mail wisabe@gmail.com
Website www.timabrahamphotography.com
Location Eau Claire, WI
Date and Time Taken September 9, 2015 1:04 a.m.
Story behind the image Just out shooting Northern Lights when I noticed this white stripe in the sky. I thought it was a jet trail, but it lasted too long. Found out the next morning that it was a Proton Arc.
Equipment Details Nikon d7000 8 sec, F2.8 11 mm 2500 ISO
Post-processing Details Just sharpened and a bit of clarity

Thank you! Your submission has been received!
Oops! Something went wrong while submitting the form.
END_OF_DOCUMENT_TOKEN_TO_BE_REPLACED