Gavin Schmidt is the EarthSky Science Communicator of the Year

EarthSky – a clear voice for science – today announced the selection of Dr. Gavin A Schmidt as the 2011 EarthSky Science Communicator of the Year. The selection was made by EarthSky’s Global Science Advisors, who voted overwhelmingly during fall 2011 to select Dr. Schmidt from among many excellent candidates. 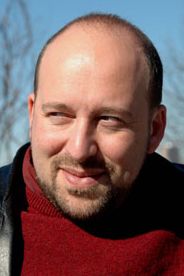 EarthSky interviewed Dr. Schmidt from his offices at the NASA Goddard Institute for Space Studies (GISS) in New York in late 2011. You can read or listen to Gavin Schmidt’s interview here.

Gavin A. Schmidt is a climatologist and climate modeler at the NASA GISS. He is co-author, with Joshua Wolfe, of Climate Change: Picturing the Science (2009), which combines images of the effects of climate change with scientific explanations. In 2011, he received the inaugural Climate Communications Prize from the American Geophysical Union for his work on communicating climate-change issues to the public.

EarthSky – producer of the internationally syndicated science podcasts in English and Spanish – serves as a platform for scientists to speak on important issues facing the 21st century. Through its global broadcast network and online outlets, EarthSky creates 4 million media impressions for science and scientists each day in the United States, and millions more around the world. In other words, people hear, watch or read the words of scientists – via EarthSky – that often every day.

The EarthSky promise: “To bring the ideas, strategies and research results of scientists to people around the world, with the goal of illuminating pathways to a sustainable future.”