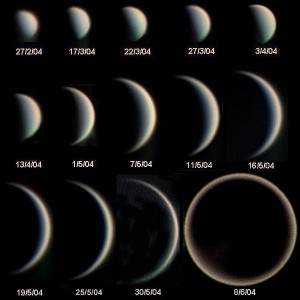 This isn’t the moon. It’s the planet Venus as seen through the telescope. As Venus wanes in the evening sky it gets closer to Earth. The lit portion of Venus covers the greatest area of sky when its disk is about one-quarter illuminated. Image via Statis Kalyvas/ European Southern Observatory/ Wikimedia Commons

Thank you! Your submission has been received!
Oops! Something went wrong while submitting the form.
END_OF_DOCUMENT_TOKEN_TO_BE_REPLACED