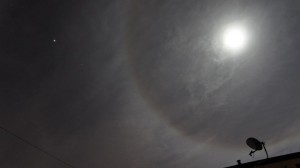 Many in the U.K. and American midwest and west saw a lunar halo last night – October 29, 2012 – as Sandy made landfall on the U.S. East Coast. Lunar halos are signs of storms. This one was seen last night in the U.K. by EarthSky Facebook friend Nathan Harrison. The bright object on the left is Jupiter. Click here to expand image.

Thank you! Your submission has been received!
Oops! Something went wrong while submitting the form.
END_OF_DOCUMENT_TOKEN_TO_BE_REPLACED

Mares’ tails over the Pacific Northwest