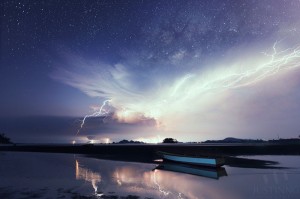 Description: Knowing that the sky would clear after sunset, I led a group of photographers to this location to film a time-lapse of the rising Milky Way above a lonely boat but what happened soon after we started shooting was amazing. We were treated to a spectacular lightning display for about an hour from 9.30pm onwards before the clouds caught up with the rising Milky Way and dominated the skies eventually. The image is a result of stacking 12 photos (11 shots of lightnings and 1 shot for everything else) from my time-lapse sequence.

Thank you! Your submission has been received!
Oops! Something went wrong while submitting the form.
END_OF_DOCUMENT_TOKEN_TO_BE_REPLACED