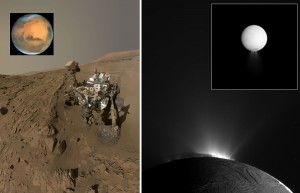 At left the Mars Science Lab rover – Curiosity on Mars with an inset of the whole planet. At right, Enceladus, the small moon of Saturn, photographed by the Cassini probe, showing the water geysers erupting from fissures at the south pole (inset global image of the moon). Photo Credits: NASA

Thank you! Your submission has been received!
Oops! Something went wrong while submitting the form.
END_OF_DOCUMENT_TOKEN_TO_BE_REPLACED