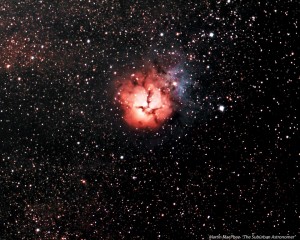 I’ve waited 46 years to take this.
The Triffid Nebula – aka M20, is a nebula complex in the Constellation Sagittarius. It is quite a remarkable object. Within it are a Stellar Nursery where new stars are forming, a star cluster of the recently born stars, a bright red hydrogen emission nebula, a lovely blue reflection nebula, and the interesting dark nebulae that divide the red nebula into the three-part structure that gave the nebula its name.

Those dark patches are the locations for the production of new protostars, which form at the tips of protrusions from the dark areas called “Evaporating Gaseous Globules” or “EGGs”. The globules are actually knots of gas that have collapsed under their own gravity to a point that they are too dense to be swept away by the intense radiation from the newly formed stars in the vicinity. Eventually these EGGs will collapse into stellar disks and form new stars and solar systems.

Why 46 years? Well back in 1967, the original Star Trek series broadcast a rather forgettable episode called “The Alternative Factor”. In it a pair of characters repeatedly cross from one dimension to another, an event that was signified by the repeated flashing of a photo of the Triffid Nebula. As a young boy I thought that image was both beautiful and beguiling, and vowed to see it for myself one day. Now I, and you, have done so. It took me a 46 year mission, much longer than the Enterprise’s original 5 years, but then I’ve always been a little slower than Captain Kirk. A little…

Thank you! Your submission has been received!
Oops! Something went wrong while submitting the form.
END_OF_DOCUMENT_TOKEN_TO_BE_REPLACED