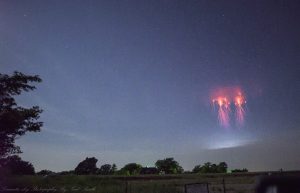 Paul Smith in Edmond, Oklahoma wrote: “My best sprite lightning capture to date. A beautiful jellyfish, close range from Highway 33 East of Kingfisher, Oklahoma this morning 5/24/2018. 12.55am local time looking NW towards Alva Ok . You can even see the colour change in the tendrils going into the lower atmosphere.”

Thank you! Your submission has been received!
Oops! Something went wrong while submitting the form.
END_OF_DOCUMENT_TOKEN_TO_BE_REPLACED