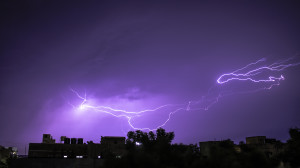 Aarthi Shankaran in Chennai, India
E-mail aarthishankaran91@gmail.com
October 10, 2013 around 1:00am
September and October are the storm season over the Bay of Bengal, India. This storm season I was working on a timelapse capturing the nightsky lit by lightning. This was one of the images from a collection of lightning images captured this season. This particular night, there was so much of activity, I only wish I had more cameras pointing in all directions! More than the photo, it was the experience of being alone, standing there drenched, amidst the fury of nature, surrounded by lightning striking in all directions, with heavy roars of thunders. I also feel sorry for the people who lost their family members because of the storm and the lightning strikes.
Equipment Details Canon T3i rebel
Post-processing Details Minor exposure corrections using Adobe Lightroom

Thank you! Your submission has been received!
Oops! Something went wrong while submitting the form.
END_OF_DOCUMENT_TOKEN_TO_BE_REPLACED