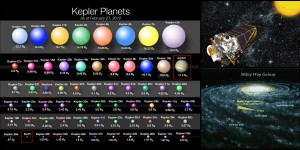 Just a sample of the planets found by the Kepler space telescope (upper right) – over 1000 confirmed and 2000 yet to be. The yellow cone or search beacon (lower right) represents the small region of the Milky Way examined by Kepler. Illustration Credits: NASA

Thank you! Your submission has been received!
Oops! Something went wrong while submitting the form.
END_OF_DOCUMENT_TOKEN_TO_BE_REPLACED