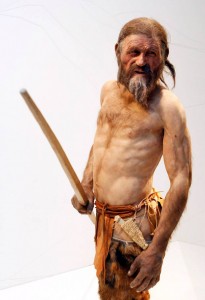 The Iceman – nicknamed Oetzi – whose bones were found in 1991 as he might have looked while alive. This reconstruction was displayed at the Archeological Museu of Bolzano during an official presentation of the reconstruction in 2011. Based on three-dimensional images of the mummy’s skeleton as well as the latest forensic technology, a new model of the living Oetzi was created by Dutch experts Alfons and Adrie Kennis.

Thank you! Your submission has been received!
Oops! Something went wrong while submitting the form.
END_OF_DOCUMENT_TOKEN_TO_BE_REPLACED