Enroll your dog in Darwin’s Dogs, and researchers will send you an easy-to-use kit to collect a doggy saliva sample for DNA analysis. Results will help unravel connections between genes and behavior – for dogs and humans.

Dogs were the first animals people domesticated, long before the earliest human civilizations appeared. Today, tens of thousands of years later, dogs have an unusually close relationship with us. They share our homes and steal our hearts – and have even evolved to love us back. Sadly, they also suffer from many of the same difficult-to-treat psychiatric and neurological diseases we do. 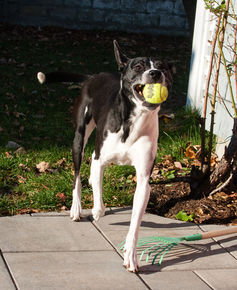 I learned this firsthand about six years ago, when my sister Adria adopted Beskow, a beautiful, boisterous, black and white mutt. Beskow became my constant companion on my morning runs along the Charles River. Her joy in running was obvious to everyone we passed, and she kept me going mile after mile.

When not running, though, Beskow suffered from constant anxiety that left her stressed and unhappy – on edge around other dogs and prone to aggressive behavior. Beskow had trouble even playing outdoors, since she was compelled to attend to every sound and movement. Working one-on-one with skilled behaviorists and trainers helped immensely, but poor Beskow still never seemed able to relax. Eventually, Adria combined the intensive training with medication, which finally seemed to give Beskow some relief.

Beskow’s personality – her intelligence, her focus and her anxiety – was shaped not only by her own life experiences, but by thousands of years of evolution. Have you ever known a dog who would retrieve the same ball over and over again, for hours on end? Or just wouldn’t stay out of the water? Or wasn’t interested in balls, or water, but just wanted to follow her nose? These dogs are the result of hundreds of generations of artificial selection by human beings. By favoring useful behaviors when breeding dogs, we made the genetic changes responsible more common in their gene pool.

When a particular genetic change rapidly rises in prevalence in a population, it leaves a “signature of selection” that we can detect by sequencing the DNA of many individuals from the population. Essentially, around a selected gene, we find a region of the genome where one particular pattern of DNA – the variant linked to the favored version of the gene – is far more common than any of the alternative patterns. The stronger the selection, the bigger this region, and the easier it is to detect this signature of selection.

In dogs, genes shaping behaviors purposely bred by humans are marked with large signatures of selection. It’s a bit like evolution is shining a spotlight on parts of the dog genome and saying, “Look here for interesting stuff!” To figure out exactly how a particular gene influences a dog’s behavior or health, though, we need lots more information.

To try to unravel these connections, my colleagues and I are launching a new citizen science research project we’re calling Darwin’s Dogs. Together with animal behavior experts, we’ve put together a series of short surveys about everything from diet (does your dog eat grass?) to behavior (is your dog a foot sitter?) to personality (is your dog aloof or friendly?).

Any dog can participate in Darwin’s Dogs, including purebred dogs, mixed breed dogs, and mutts of no particular breed – our study’s participants will be very genetically diverse. We’re combining new DNA sequencing technology, which can give us much more genetic information from each dog, with powerful new analysis methods that can control for diverse ancestry. By including all dogs, we hope to be able to do much larger studies, and home in quickly on the important genes and genetic variants. 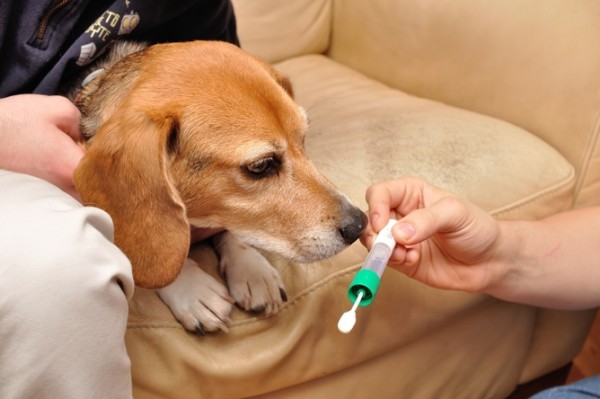 Once an owner has filled out the survey, there’s a second, crucial step. We send an easy-to-use kit to collect a small dog saliva sample we can use for DNA analysis. There’s no cost, and we’ll share any information we find.

Our plan is to combine the genetic data from many dogs and look for changes in DNA that correlate with particular behaviors. It won’t be easy to match up DNA with an obsession with tennis balls, for instance. Behavior is a complex trait that relies on many genes. Simple Mendelian traits, like Beskow’s black and white coat, are controlled by a single gene which determines the observable characteristic. This kind of inherited trait is comparatively easy to map. Complex traits, on the other hand, may be shaped by tens or even hundreds of different genetic changes, each of which on its own only slightly alters the individual carrying it.

Adding to the complexity, environment often plays a big role. For example, Beskow may not have been as anxious if she’d lived with Adria from puppyhood, even though her genetics would be unchanged. 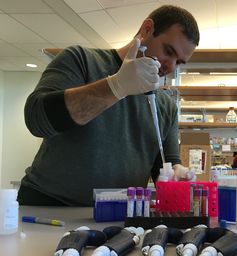 To succeed, we need a lot of dogs to sign up. Initially, we’re aiming to enroll 5,000 dogs. If successful, we’ll keep growing. With bigger sample sizes, we’ll be able to tackle even more complex biological puzzles.

This is a huge effort, but could offer huge rewards. By figuring out how a genetic change leads to a change in behavior, we can decipher neural pathways involved in psychiatric and neurological diseases shared between people and dogs. We already know these include not just anxiety, but also PTSD, OCD, autism spectrum disorders, phobias, narcolepsia, epilepsy, dementia and Alzheimer’s disease.

Understanding the biology underlying a disease is the first step in developing more effective treatments – of both the canine and human variety. For example, genetic studies of narcolepsy in Doberman pinschers found the gene mutation causing the disease – but only in this one dog population. Researching the gene’s function, though, led to critical new insights into the molecular biology of sleep, and, eventually, to new treatment options for people suffering from this debilitating disease.

Darwin’s Dogs is investigating normal canine behaviors as well as diseases. We hypothesize that finding the small genetic changes that led to complex behaviors, like retrieving, or even personality characteristics, like playfulness, will help us figure out how brains work. We need this mechanistic understanding to design new, safe and more effective therapies for psychiatric diseases. 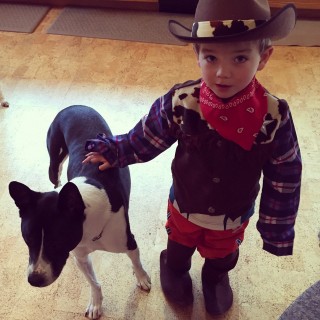 Beskow with one of her loving family members. Photo credit: Adria Karlsson

And Beskow? Six years later, she is as wonderful as ever. While still anxious some of the time, the medication and training have paid off, and she enjoys her daily walks, training and playtime. She still gets very nervous around other dogs, but is a gentle, playful companion for my sister’s three young children.

We are now sequencing her genome. In the next few months, we should have our first glimpse into Beskow’s ancestry. We know she is a natural herder, so we’re curious to find out how much her genome matches up to herding breeds, and which genes are in that part of the genome.

Of course, we can’t figure out much from just one dog – if you are a dog owner, please enroll your dog today!