Why do we love to scream?

We love watching horror movies and getting scared in haunted houses. But why? This scientist has spent the past 10 years investigating just this question. 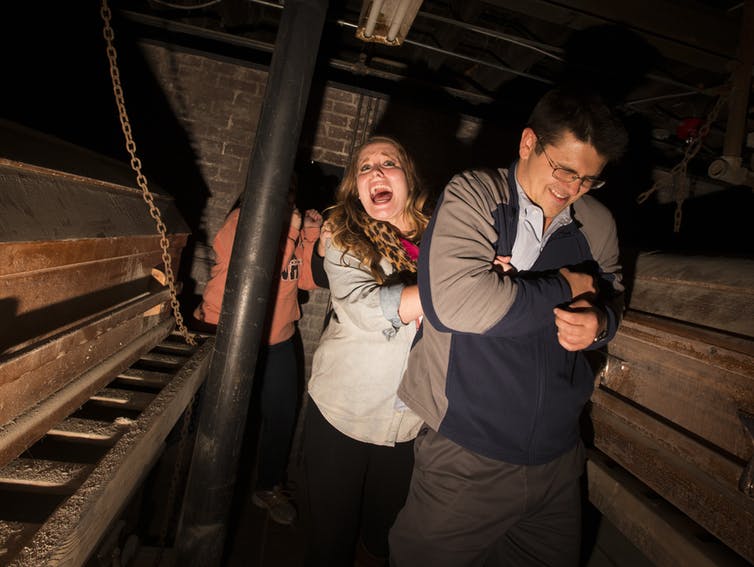 By Margee Kerr, University of Pittsburgh

Audiences flocked to theaters to witness the seemingly random murder and mayhem a masked man brought to a small suburban town, reminding them that picket fences and manicured lawns cannot protect us from the unjust, the unknown or the uncertainty that awaits us all in both life and death. The film offers no justice for the victims in the end, no rebalancing of good and evil. 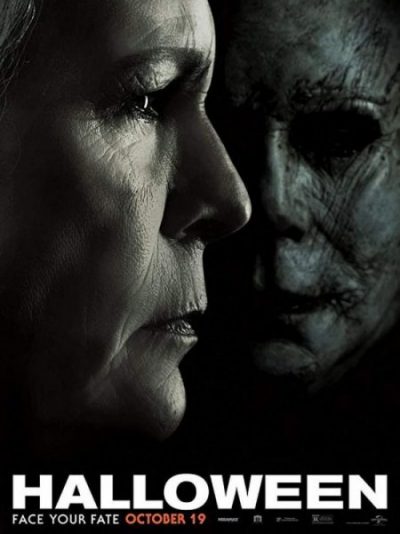 A new installment of the “Halloween” franchise brings the action forward to 2018. Image via Universal Pictures.

Why, then, would anyone want to spend their time and money to watch such macabre scenes filled with depressing reminders of just how unfair and scary our world can be?

I’ve spent the past 10 years investigating just this question, finding the typical answer of “Because I like it! It’s fun!” incredibly unsatisfying. I’ve long been convinced there’s more to it than the “natural high” or adrenaline rush many describe – and indeed, the body does kick into “go” mode when you’re startled or scared, amping up not only adrenaline but a multitude of chemicals that ensure your body is fueled and ready to respond. This “fight or flight” response to threat has helped keep humans alive for millennia.

That still doesn’t explain why people would want to intentionally scare themselves, though. As a sociologist, I’ve kept asking “But, why?” After two years collecting data in a haunted attraction with my colleague Greg Siegle, a cognitive neuroscientist at the University of Pittsburgh, we’ve found the gains from thrills and chills can go further than the natural high. 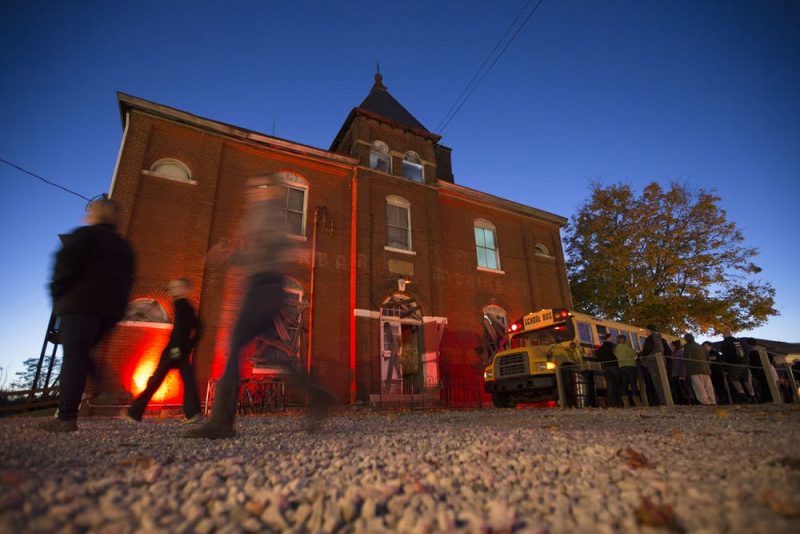 Around Halloween, some people love to head to haunted attractions like this one in an old Cincinnati schoolhouse. Image via AP Photo/John Minchillo.

Studying fear at a terrifying attraction

To capture in real time what makes fear fun, what motivates people to pay to be scared out of their skin and what they experience when engaging with this material, we needed to gather data in the field. In this case, that meant setting up a mobile lab in the basement of an extreme haunted attraction outside Pittsburgh, Pennsylvania.

This adults-only extreme attraction went beyond the typical startling lights and sounds and animated characters found in a family-friendly haunted house. Over the course of about 35 minutes, visitors experienced a series of intense scenarios where, in addition to unsettling characters and special effects, they were touched by the actors, restrained and exposed to electricity. It was not for the faint of heart.

We also used mobile EEG technology to compare 100 participants’ brainwave activity as they sat through 15 minutes of various cognitive and emotional tasks before and after the attraction.

Guests reported significantly higher mood, and felt less anxious and tired, directly after their trip through the haunted attraction. The more terrifying the better: Feeling happy afterward was related to rating the experience as highly intense and scary. This set of volunteers also reported feeling that they’d challenged their personal fears and learned about themselves.

Analysis of the EEG data revealed widespread decreases in brain reactivity from before to after among those whose mood improved. In other words, highly intense and scary activities – at least in a controlled environment like this haunted attraction – may “shut down” the brain to an extent, and that in turn is associated with feeling better. Studies of those who practice mindfulness meditation have made a similar observation.

Coming out stronger on the other side

Together our findings suggest that going through an extreme haunted attraction provides gains similar to choosing to run a 5K race or tackling a difficult climbing wall. There’s a sense of uncertainty, physical exertion, a challenge to push yourself – and eventually achievement when it’s over and done with.

Fun-scary experiences could serve as an in-the-moment recalibration of what registers as stressful and even provide a kind of confidence boost. After watching a scary movie or going through a haunted attraction, maybe everything else seems like no big deal in comparison. You rationally understand that the actors in a haunted house aren’t real, but when you suspend your disbelief and allow yourself to become immersed in the experience, the fear certainly can feel real, as does the satisfaction and sense of accomplishment when you make it through. As I experienced myself after all kinds of scary adventures in Japan, Colombia and all over the U.S., confronting a horde of zombies can actually make you feel pretty invincible.

Movies like “Halloween” allow people to tackle the big, existential fears we all have, like why bad things happen without reason, through the protective frame of entertainment. Choosing to do fun, scary activities may also serve as a way to practice being scared, building greater self-knowledge and resilience, similar to rough-and-tumble play. It’s an opportunity to engage with fear on your own terms, in environments where you can push your boundaries, safely. Because you’re not in real danger, and thus not occupied with survival, you can choose to observe your reactions and how your body changes, gaining greater insight to yourself. 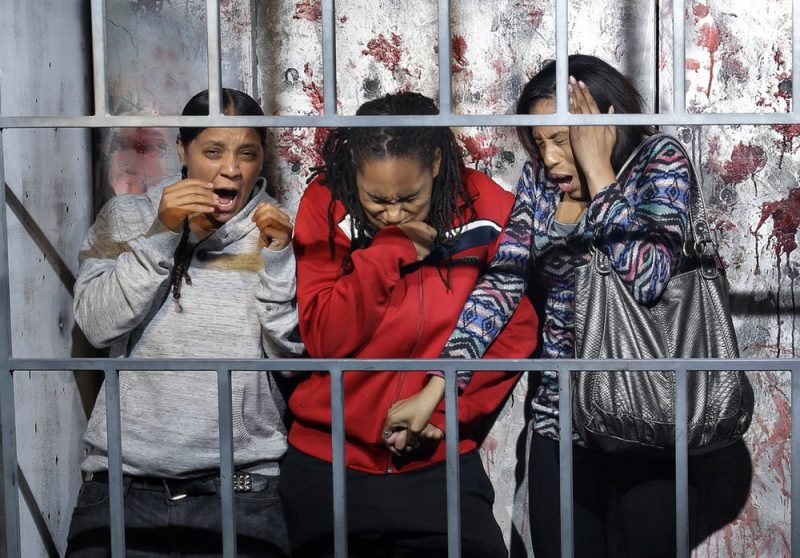 Friends stuck together in a ‘Gates of Hell’ haunted house. Image via AP Photo/John Locher.

What it takes to be safely scared

While there are countless differences in the nature, content, intensity and overall quality of haunted attractions, horror movies and other forms of scary entertainment, they all share a few critical components that help pave the way for a fun scary time.

First and foremost, you have to make the choice to engage – don’t drag your best friend with you unless she is also on board. But do try to gather some friends when you’re ready. When you engage in activities with other people, even just watching a movie, your own emotional experience is intensified. Doing intense, exciting and thrilling things together can make them more fun and help create rewarding social bonds. Emotions can be contagious, so when you see your friend scream and laugh, you may feel compelled to do the same.

No matter the potential benefits, horror movies and scary entertainment are not for everyone, and that’s OK. While the fight-or-flight response is universal, there are important differences between individuals – for example, in genetic expressions, environment and personal history – that help explain why some loathe and others love thrills and chills.

Regardless of your taste (or distaste) for all things horror or thrill-related, an adventurous and curious mindset can benefit everyone. After all, we’re the descendants of those who were adventurous and curious enough to explore the new and novel, but also quick and smart enough to run or fight when danger appeared. This Halloween, maybe challenge yourself to at least one fun scary experience and prepare to unleash your inner superhero.

Bottom line: A scientist studies why we like scary movies and haunted houses and what it takes to be safely scared.