Why are some people more attractive to mosquitoes?

People with more bacteria, but fewer varieties of bacteria, on their skin are more attractive to a mosquito important in the spread of malaria.

About one in every 10 people appears to be more attractive to mosquitoes than everyone else. Why? No one knows exactly why, but genetics are thought to play a role: if your mom or dad was a mosquito magnet, you might be, too. Other factors include your diet, substances on your skin such as perfumes, soaps, cosmetics and deodorants, and how your particular body chemistry manifests on your skin surface. According to a paper published on December 28, 2011 in the online journal PLoS ONE, one answer for a particular mosquito might relate to the abundance and diversity of bacterial communities on your skin. Since this mosquito is key to malaria transmission, the researchers hope to shed light on new ways to prevent malaria. 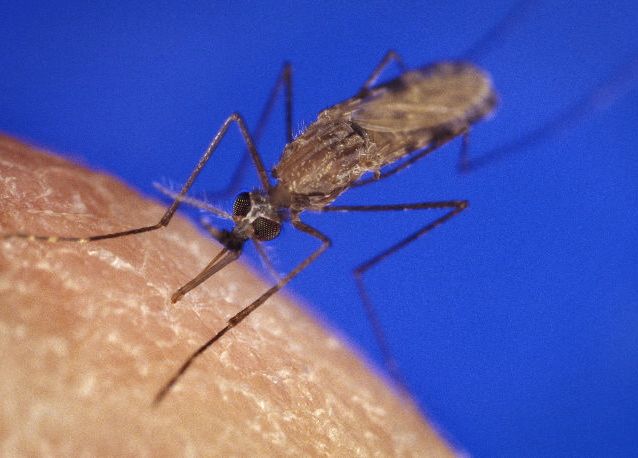 Anopheles Gambiae mosquitos – which play an important role in spreading malaria – are attracted to individuals with more bacteria, yet less diverse bacteria, on their skin. Image via Wikimedia Commons

These researchers conducted experiments with the Anopheles gambiae sensu stricto mosquito. They found that individuals with a higher abundance but lower diversity of bacteria on their skin were more attractive to this particular mosquito.

The researchers, led by Niels Verhulst of Wageningen University in the Netherlands, speculated that individuals with more diverse bacterial communities on their skin might host some bacteria that emit compounds to interfere with mosquito attraction. So having more diverse bacteria on the skin would make these individuals less attractive to mosquitoes, and therefore at a lower risk to contracting malaria. The researchers said they hope this work will lead to the development of personalized methods for malaria prevention.

By the way, not all mosquitoes bite. Only the female mosquitoes do. It’s been found that the females need human blood to develop fertile eggs.

Bottom line: A particular mosquito – the Anopheles gambiae sensu stricto mosquito – was found in experiments to be attracted to people with more bacteria, but fewer different kinds of bacteria, on their skin. This information might lead to individualized preventative measures for malaria, since this mosquito is key in malaria transmission.

What causes the red bump around a mosquito bite?