Where does our sense of time come from?

Our sense of time is mutable, stemming at least in part from our ongoing experience of the external world.

In 1905, Albert Einstein published his theory of Special Relativity – showing that wristwatches of two observers in motion relative to one another will measure time differently. Since then, our human concept of time has gotten slippery. It’s no longer possible to think of time as ticking along at a constant rate since the universe was born, separate from our own human perceptions. 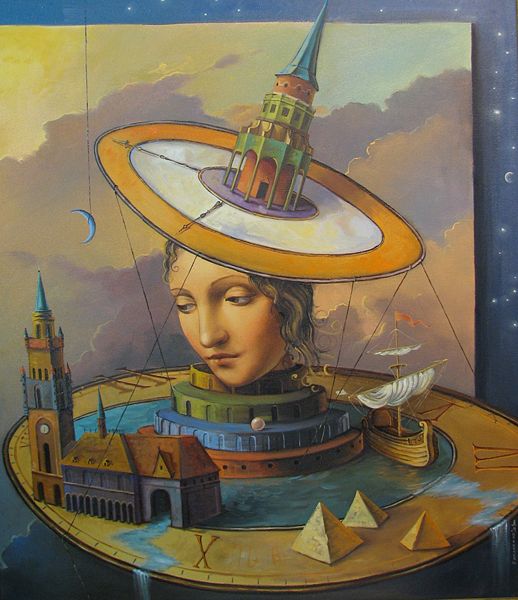 The Past, oil painting on linen by Anastasiya Markovich via Wikimedia Commons

Studies have borne out the idea that we all perceive time differently. For example, in 2001, two scientists at University College London conducted research showing that our internal clocks don’t always match either. My internal clock doesn’t tick at the same rate as yours. Everyone’s sense of time is different and, at least in part, dependent on what our senses are telling us about the external world.

The UCL scientists – Misha B. Ahrens and Maneesh Sahani – wanted to answer the question, “Where does our sense of time come from?” Their research indicated that we humans use our senses – for example, the sense of sight – to help keep track of short intervals of time.

According to Ahrens and Sahani, we humans have learned to expect our sensory inputs to change at a particular average rate. They said that comparing the change we see to this average value helps us judge how much time has passed, and refines our internal timekeeping.

Dr Maneesh Sahani said in a 2011 press release about his study:

There are many proposals for how an internal clock might work, but no one has found a single part of the brain that keeps track of time. It may be that there is no such place, that our perception of time is distributed across the brain and makes use of whatever information is available.

The study included two key experiments. In one, 20 participants watched small circles of light appear on a screen twice in a row, and were asked to say which appearance lasted longer. When the circles were accompanied by a mottled pattern programmed to change randomly, but with a regular average rate, participants’ judgments were better – suggesting that they used the rate of change in the patterns to judge the passing of time.

In the second experiment, the authors asked participants to judge how long the mottled patterns themselves lasted, but varied the rates at which those patterns changed. When the patterns changed faster, participants judged them to have lasted longer – again showing that sensory change shapes our sense of time. Dr. Sahani said:

Our sense of time is affected by outside stimuli, and is therefore highly mutable, which is something that resonates with people’s feeling about the passing of time.

So Misha B. Ahrens and Maneesh Sahani have shown that our internal clocks are subject to external stimuli. And we all knew it already, of course. It’s like the physicist who asks his grandfather what he understands about relativity theory. The grandfather says:

I understand it perfectly. A minute in the dentist’s chair seems like an hour. But an hour with a beautiful woman in your lap seems like a minute.

Time flies when we’re having fun – when external stimuli are pleasant.

Science has demonstrated in a lab what the physicist’s grandfather, and all of us, experience every day. Ahrens’ and Sahani’s results – published online in the journal Current Biology – show that our sense of time is mutable, stemming at least in part from our ongoing experience of the external world.

One year in 40 seconds