Norovirus causes over half of food-borne and gastrointestinal illness in the U.S., and in winter even. The nerve!

I’ve never understood the appeal of cruises. They sound boring, too much time sitting on your butt at sea, not enough running around on land. But passengers on a recent 10-day cruise through the Balkan Sea had a lamer than average journey thanks to an outbreak of norovirus. Exactly how many of the ship’s passengers fell victim to the miserable gastrointestinal malady is up for grabs (as many as 400 according to fellow passengers, just a handful if you ask the PR department). The “plague ship”, as it was re-christened by unhappy customers (pretty classy given the circumstances, I’d have gone with “ship of loose stools” or the “S.S. Blaaaauuurrrggh”), was back at the dock last week, but we’re sure to see plenty more cases of norovirus in the coming months. It isn’t called the “winter vomiting bug” for nothing.*

Four hundred cases on one cruise may sound improbable, but norovirus is a mighty pathogen. Like many a food-borne illness, it’s transmitted via the fecal-oral route. Feces of an individual infected with the virus is somehow ingested by an uninfected person – often in contaminated food or water – where it replicates in the digestive tract and continues the cycle. Vomit works too. It’s gross, I know. But don’t worry, because we’re likely talking about a miniscule amount of puke or poo in your food. Part of the charm of the winter vomiting bug is its drastically low infectious dose. As few as 18 viral particles can be enough to make you thoroughly sick.** 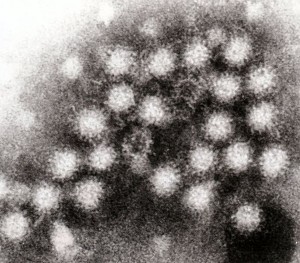 Norovirus is also a hardy bug. It can handle temperatures from freezing to 60C, and it just laughs at the piddling amount of chlorine we use to sanitize our drinking water. Its high mutation rate assures that there are loads of different strains out there for you to catch. But even if there were only one or two strains, norovirus would still be a problem, since being infected doesn’t appear to generate long-term immunity. A battle with the bug may take you out of the susceptible pool for a few months or even a year, but eventually your immune system will be vulnerable to further viral pummeling.

And then there’s the viral shedding. Viral particles can be shed in the feces of infected individuals before symptoms appear and well after they dissipate. Oh, the contagiousness! Equally discouraging is the knowledge that up to 30% of people infected with norovirus show zero symptoms. So perfectly healthy looking people with imperfectly washed hands can unsuspectingly pass the germ along. I’m not sure those “employees must wash their hands” signs are enough (I’ve seen some pretty half-assed hand washing out there). People preparing food for public consumption would need to scrub in like surgeons if we’re to have any hope of keep norovirus out of restaurants and catered buffets.

There’s still no vaccine, in case you were about to ask, and no treatment beyond lying in the fetal position on the bathroom floor for a day of two.

Norovirus illness occurs year round, but the majority of cases crop up it the colder months, which sounds somewhat counterintuitive. Colds and flus in winter make sense. They’re respiratory ailments. Once temperatures drop, people are trapped indoors with the windows closed coughing and sneezing all over each other until spring. But food-borne illness seems more like a summer thing, with all the picnics and barbeques and unrefrigerated egg salad sandwiches. Why should this one be any different?

Unfortunately, norovirus doesn’t lend itself to being grown in test tubes, but a 2009 study published in PLoS One examining prevalence of the virus in England and Wales for over a decade found that, among other factors, norovirus illness rates increased following cold and/or dry weather. The effects of temperature and humidity were independent of each other, suggesting that the virus may actually fare better under winter temperature and humidity conditions, as opposed to something like Hepatitis A (another food-borne virus), which thrives in warm, wet weather.

I’m guessing the cabin fever aspect of winter helps too. While norovirus is a major cause of food-borne illness, it also has a high rate of secondary, person-to-person transmission. It’s that low infectious dose we discussed, and the fact that it can linger on surfaces for hours and days. An infected person doesn’t need to touch your food with their poorly washed hands to pass the germ along, they can just touch the doorknob of the bathroom you’re sharing. For this reason, settings where lots of people reside in close quarters with shared facilities are prime locations for outbreaks. Places like hospitals, schools, nursing homes, and, of course, cruise ships. 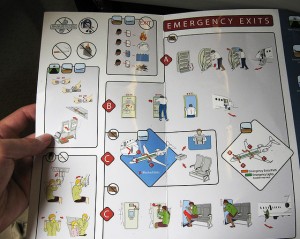 What?! No advice for norovirus emergencies? Image: Joel Franusic.

There’s also some evidence that those horrid claustrophobic metal tubes known as airplanes can facilitate secondary transmission of the virus. Case in point: in October of 2008, in what sounds like the worst flight in the history of aviation (excluding those that end in actual crashes), a plane heading from Boston to Los Angeles had to be diverted mid-flight after several passengers suffered severe vomiting and diarrhea. Those unfortunate folks had caught the bug elsewhere (they were all part of tour group and were on their way home) as a domestic flight isn’t long enough to allow for the 10-51 hour incubation period of norovirus. But in the following days, an additional seven passengers on the same flight (but not from the tour group) also came down with norovirus like symptoms.

With norovirus season off to an early start this year you’re probably less interested in hearing about how spectacularly contagious it is than about how you might avoid it. Sadly, there’s not a ton of advice I can offer in that regard. It’s pretty ubiquitous, most people have had at least one bout of the virus by age five. Unless you’re living fully off the grid, you only have so much control over your food, so you’ll just have to hope for the best there. Better to focus on reducing person-to-person transmission. Washing your hands thoroughly is always good practice, and you should also stop putting your fingers in your mouth all the time.*** As for airplanes, I can tell you that most of the passengers who contracted gastrointestinal illness after flying with the sick tour members were situated in aisles seats (including one in the first class cabin), which infected passengers were more likely brush by during their dashes to the lavatory and frequent trips to dispose of barf bags.The lesson? Flying first class won’t protect you from norovirus, but a window seat might help.

* Symptoms include sudden onset vomiting and/or diarrhea. The malady is also called “stomach flu”, a term I don’t approve of as noroviruses are not in the same family as influenzas. I will, however, accept “stomach virus”.

** For comparison, consider cholera with its infectious dose of one million to over a billion organisms. For a cholera outbreak to occur, you need a major breakdown in food and water sanitation. Norovirus just needs someone in the kitchen to do a sloppy job washing their hands on the way out of the loo.

*** Keep your fingers out of your eyes too, as plenty of germs can gain entrance through that portal. As a life-long fidgeter I understand that it’s difficult to keep one’s hands away from one’s face, but as any biology teacher will tell you, you’ll get sick less frequently if you can get some control over that.