Researchers have found that when diners confront a large plate of food, eaters with bigger forks leave more on the plate.

Researchers doing enviable field work in an Italian restaurant have found that when diners confront a plate of food, eaters with bigger forks leave more on the plate. Well, they do if the plate is large.

Publishing [PDF] their work on July 13, 2011 in the Journal of Consumer Research, authors Arul Mishra, Himanshu Mishra, and Tamara Masters report that diners wielding large forks ate less from large plates. On the other hand, when it came to eating from small plates, fork size didn’t matter.

In their field work, the authors just had to go a “popular, locally owned” Italian restaurant to observe human eaters in their natural habitat. The restaurant, the authors note, has been in business for 40 years, so they know their forks. In this case, the researchers posed as waitstaff and predestined specific tables to offer up large forks or small forks. Presumably to avoid any bias of table location – perhaps people who can see into the kitchen naturally eat less – the investigators rotated the table assignments for fork size.

Posing as waitstaff for two days – and any servers worth their table salt can tell you, that’s not such a big leap from behavioral research – the investigators took orders, weighed the food before taking it out, and then sneaked a sticky note onto the bottom of the plate before it left the kitchen. How diners failed to notice a sticky note on the bottom of their plates remains a mystery. The note identified the plate, table, food, and table fork size. Upon its return, the plate again underwent weighing.

The ever-useful sticky note served as the record for the weight and was, as the authors carefully note, “removed and stored” (I love this paper). The authors also recorded whether or not the diners had ordered an alcoholic drink, presumably because of potential effects of alcohol on appetite, fork size notwithstanding.

The results may have you running for a pitchfork for your next dining experience. The consumers with big forks ate less food.

The authors figured that perhaps using a large fork made the portion size shrink faster, giving a visual cue of “Hey, I sure have eaten a lot,” which translated to feeling full and leaving more on the plate. A small fork, in contrast, means less of a visible dent in what’s on the plate, even after some dedicated consumption. 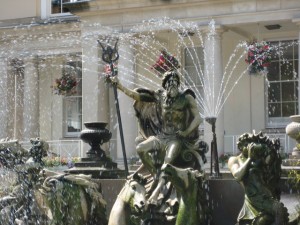 Did Neptune keep his youthful figure because he used a giant fork? Image Credit: © Copyright Philip Halling and licensed for reuse under a Creative Commons Licence.

The researchers tested this idea by looking for a relationship between the size of the portion served up and how much diners consumed. They found that if the amount of food wasn’t big, fork size didn’t matter. Imagine a small appetizer of antipasto on a tiny plate. You’ll eat it whether or not you’ve got a big fork or a tiny fork. Either way, you’re clearing that thing off pretty quickly, and your eyes say, “Hey, I’m getting something out of this.”

But then imagine a plate piled high with pasta in a delightful arrabiata sauce. Big fork means you’re shoveling it in apace, making it look like you’re getting something out of your work. Little fork means you eat and eat and eat and visually determine that it’s still not enough. So, you keep eating. Thanks, tiny fork!

In other words, bite size – and fork size – matters, but only if you’re facing down a large pile of food. The authors note (did I mention that I love this paper?) that “Grandma’s advice tells us to consume small bites, but remember, she also tells us to chew well so that our body has enough time to let us know that we are full.” My grandma focused more on not putting elbows on the table, but the point that Arul Mishra, Himanshu Mishra, and Tamara Masters are making is that in this crazy-fast world, no one has time to chew thoroughly any more, so grab a large fork and make those bites big.

Fasting might be good for your health and heart, say researchers in Utah