We used compositing techniques to replace the blown-out skies of NYC with long-exposure footage captured at pristine dark sky locations like Death Valley National Park and Grand Canyon National Park. This is all part of SkyglowProject.com, our ongoing quest to raise awareness for endangered night skies and examine the dangers of light pollution.

We kicked off Skyglow three years ago with a viral composite video over Los Angeles so we thought it fitting to cross the continent and photograph New York to honor this year’s Dark Sky Week.

The film was shot on Canon 5DIV cameras and lenses sponsored by Canon USA, aided by Alpine Labs’ Michron and Pulse, powered by Paul C. Buff Vagabond Mini. Adobe Lightroom and Premiere were used for editing and processing. Additional corrections by LRTimelapse.

More on this video here. 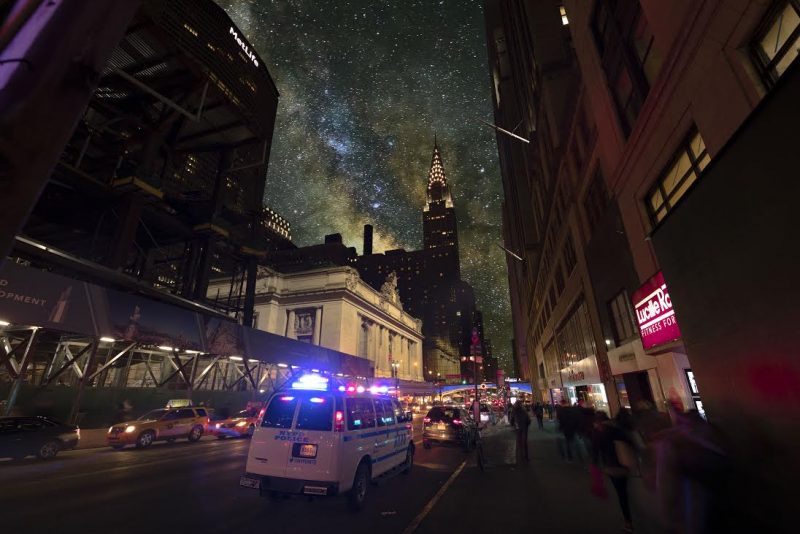 By the way, in 2015, the state of New York took an unprecedented step to begin protecting wildlife from excessive use of lights. The Audubon Society said:

New York State Governor Andrew M. Cuomo announced that state-owned and state-managed buildings from Buffalo to Gotham and Binghamton to Plattsburg will participate in the Audubon NY Lights Out program. That means unessential outdoor lighting will be shut off from 11 p.m. to dawn, from April 15 through May 31, and August 15 through November 15, when waves of songbirds migrate through New York in the dark en route to southern wintering grounds.