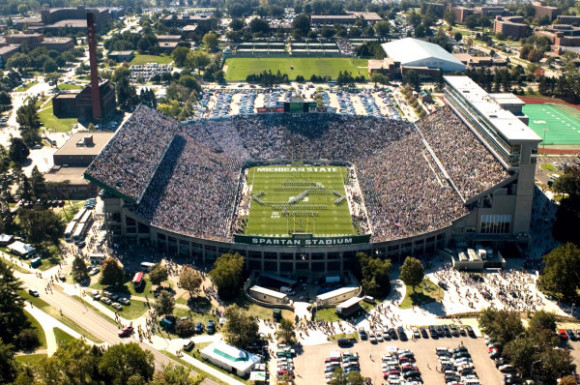 Michigan State’s football stadium had to be evacuated last Saturday (September 7), due to inclement weather. Image via msuspartans.com

This past Saturday (September 7, 2013), the Michigan State Spartans took on the South Florida Bulls for the second week of college football, and defeated them 21-6. This particular game wasn’t just about controlling the line of scrimmage, however. It was also about protecting the fans, as inclement weather passed over the stadium, delaying the game. A message posted on the scoreboard urged fans to evacuate, due to lightning, and most had left. But a student section was still about half full. To convince the students to leave the stadium, Michigan State’s head basketball coach Tom Izzo ran onto the football field with a microphone. He told the students that, if they evacuated, he would sit with them in the second half of the football game to join them in cheering on the Spartans.

Here’s the text version of what Coach Tom Izzo said in front of the student body at the Michigan State game:

Alright, listen up. Now you might not be as happy with me in a minute, but you got to understand something that’s really important to me, and that’s all of you. And listen … Shhhh … Aww … You didn’t even lose a game yet and you are mad at me! I would sit right in the middle of your section and have a hell of a time.

The problem is it’s not just the rain. The ugly orange stuff and that putrid yellow that reminds me of Michigan … (jokes)

So, I am going to beg ya, I’m going to ask you for respect of our university, myself, and you guys. If you can just walk under and abide by it, I promise I’m going to come back and sit right in the middle of you when this game starts. (cheering)

Thank you so much and I’ll see you in a half hour back here, and I’m gonna be right in the middle of ya!

After (most) students left the stadium and returned, Izzo kept his promise and joined the student section to cheer for the Spartans.

Watch the video below, as Izzo keeps his promise and joins the student section when Michigan State’s defense forces a turnover for a touchdown. 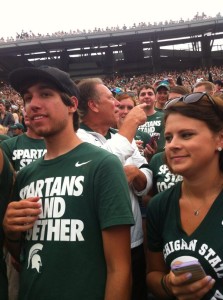 Tom Izzo kept his promise and joined the student section after a storm delay on September 7. Image Credit: Twitter via @fiveburger

I think what Izzo did was fantastic, and I hope these videos go viral and teach lessons to every student body at all campuses across the United States. Why? Because being aware of the weather is important for your safety.

If thunder roars, go indoors and take shelter! Lightning has a tendency to strike the tallest objects, and if you are in the nosebleed section (or any section!) of an outdoor stadium, you should make it a priority to evacuate.

Bottom line: The Michigan State football game was delayed due to thunderstorms pushing into the area. To convince the student body to evacuate the stadium, Michigan State’s head basketball coach Tom Izzo promised the students that he would sit with them during the second half of the game to cheer for the Spartans. Go Tom Izzo! Awesome job.