June 26, 1959 marked the official opening of the St. Lawrence Seaway, inaugurating an overland water passage from the Great Lakes to the Atlantic Ocean.

June 26, 1959. The official opening of the St. Lawrence Seaway took place on this date, attended by Queen Elizabeth II of England. The seaway from the U.S. Great Lakes to Atlantic Ocean had already been in operation for two months at the time. Due to its four sections, deep waters and many locks, the Canadian Encyclopedia describes the St. Lawrence Seaway as a “monumental engineering and construction feat.” 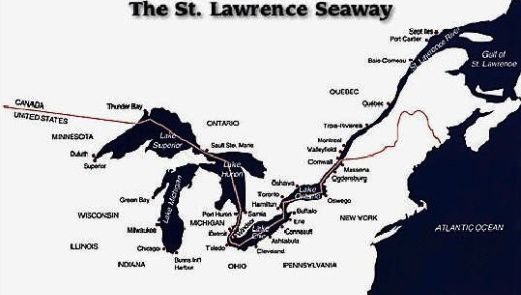 Engineers constructed canals near the St. Lawrence River as early as 1783, but it wasn’t until the 1950s that the United States and Canada were able to come to a pact to have a complete waterway between the Great Lakes and the Atlantic Ocean.

Construction began on the final leg in 1954, which included flooding 38,000 acres (15,400 hectares) of land, according to the Canadian Encyclopedia. As a result, 6,500 people across nine small communities had to be relocated to other areas.

Today, more than 200 million net tons of cargo flows through the seaway every year.

Bottom line: June 26, 1959 marked the official opening of the St. Lawrence Seaway, inaugurating an overland water passage from the Great Lakes to the Atlantic Ocean.