This date in science: “I am Jeremiah Dixon”

With Charles Mason, he established the Mason-Dixon line, which later marked a cultural boundary between the U.S. North and South.

Original Mason-Dixon line. Mason and Dixon were prevented from finishing the western portion of the line due to a potential conflict with American Indians. The line was later extended by others. Image and caption via Wikimedia Commons. 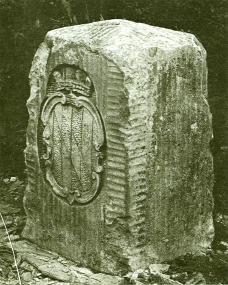 Boundary marker on the Mason–Dixon line, originally placed at every 5th mile along the line. Coat of arms of Maryland’s founding Calvert family shown. Other side shows the arms of William Penn, whose son Thomas was founder of Pennsylvania. Photo via Wikimedia Commons.

July 27, 1733. Today is the birthday of Jeremiah Dixon, who, with Charles Mason, determined what was later called the Mason-Dixon line.

In 1763, Dixon and Mason signed an agreement to help resolve a border dispute between British colonies in Colonial America. They arrived in Philadelphia in November 1763 and began their survey, which was not complete until late 1766. That survey line – known today as the Mason-Dixon line – forever separated four U.S. states: Pennsylvania, Maryland, Delaware, and West Virginia (then part of Virginia). The Mason–Dixon line also came to symbolize a cultural boundary between the northeastern U.S. and southern states, whose popular nickname Dixie is sometimes said to have been inspired by Jeremiah Dixon’s last name.

Dixon was an English surveyor and astronomer, born in the village of Cockfield, England. His father was a wealthy Quaker coal mine owner. His mother, Mary Hunter, came from Newcastle and is said to have been the cleverest woman that ever married into her husband’s family. In the course of his education, Dixon became interested in astronomy and mathematics. In his youth, he’s said to have met with eminent astronomers and mathematicians. The English astronomer John Bird, a Fellow of the British Royal Society, probably recommended Dixon as a companion for Charles Mason. Dixon served as Mason’s assistant when the Royal Society selected Mason to observe a transit of Venus on June 6, 1761.

After surveying the Mason-Dixon line, Jeremiah Dixon and Charles Mason stayed on to measure a degree of Earth’s meridian on the Delmarva Peninsula in Maryland, on behalf of the Royal Society.

In recent years, Mason and Dixon’s feat has inspired works of music and literature. In 1997, Thomas Pynchon released his novel Mason & Dixon. Mark Knopfler is said to have been inspired by Pynchon’s book to write the song Sailing to Philadelphia, whose lyrics (via LyricsFreak) are below.

I am Jeremiah Dixon
I am a Geordie boy
A glass of wine with you, sir
And the ladies I’ll enjoy
All Durham and Northumberland
Is measured up by my own hand
It was my fate from birth
To make my mark upon the earth…

Now you’re a good surveyor, Dixon
But I swear you’ll make me mad
The West will kill us both
You gullible Geordie lad
You talk of liberty
How can America be free
A Geordie and a baker’s boy
In the forest of the Iroquois…

Now hold your head up, Mason
See America lies there
The morning tide has raised
The capes of Delaware
Come up and feel the sun
A new morning is begun
Another day will make it clear
Why your stars should guide us here…

Bottom line: July 27, 1733 is the birthday of Jeremiah Dixon, who, with Charles Mason, determined what was later called the Mason-Dixon line.