The milk of human kindness: providing for baby pandas

Conservationists and researchers are keen on developing an artificial milk formula for abandoned or orphaned panda cubs.

As Edinburgh Zoo and Scotland awaits the birth of a cub – or two – to Tian Tian hopefully any new arrivals will happily suckle on their mother in order to receive the essential nutrients and antibodies they need to help them grow.

However, pandas are not always comfortable breeding in a zoo, and will sometimes reject or even accidentally kill their newborn babies if they are feeling stressed.

Similarly, if two cubs are born to a panda, one will be rejected so that all of the mother’s attention and milk can be invested in just one cub. 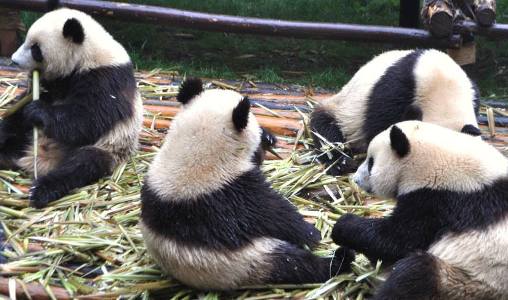 Pandas at Chengdu Research Base. Image via University of Glasgow.

In these scenarios humans will step in to lend a hand, which is why conservationists in China are keen on developing an artificial milk formula for abandoned or orphaned panda cubs, and are looking for help from scientists at the University of Glasgow.

At the moment, hand-rearing of orphan panda cubs relies on cows’ milk adapted for puppy dogs or, in the case of twins, swapping them when the mother is distracted so each can get sufficient milk.

However, better support for panda cubs is needed because pandas, unlike humans, are heavily dependent on the mother’s first milk, or ‘colostrum’, which contains large amounts of antibodies needed to protect the newborn from disease. It is absolutely essential for panda cubs to receive their full quota of colostrum milk from their mothers – without it, they would die.

To help the Chinese conservationists in their quest, researchers at Glasgow are leading a study into panda milk that is being part-funded by the Chengdu Research Base of Giant Panda Breeding in Sichuan, China.

The team is using state-of-the-art instruments to identify and characterise the proteins and other molecules that make up panda colostrum and the later, mature milk.

Milk is a complex mixture of nutrients and other molecules that support development and protect against infection. Understanding how the composition of panda milk differs from dairy and human milk may assist in the development of a modified formula that can better support baby pandas.

Professor Kennedy said: “My interest here is in the biology of lactation in bears. Bears give birth to tiny, helpless cubs that are unusually small relative to their mothers in the case of pandas the weight ratio can be as low as 1:1,000 or less. It could be that panda milk is specially adapted to rear such under-developed young. Indeed, we have found that panda milk takes much longer to convert from colostrum to regular milk than in cows, for example.

“We’re investigating the lactation period from birth to about 150 days. When we look at how levels of different proteins change during panda lactation, we find that these molecules change unexpectedly slowly compared to other placental mammals. Also, certain small molecules that include essential nutrients are produced in large amounts at first, then fade away, while some are produced constantly, and others appear later.

“The research will help us understand lactation biology in different types of mammal, bears in particular. We are still a long way from designing a milk substitute for panda cubs, but the kind of data we are generating will set us in the right direction.”

Via University of Glasgow