Tool marks within the engraving suggest that it was likely created by someone who intentionally passed a sharp object again and again over the cave wall. 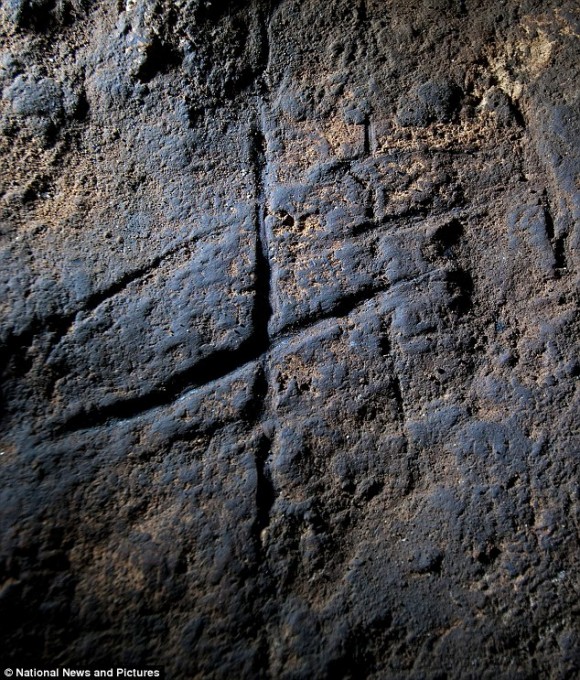 These lines scratched into a cave might be proof that Neanderthals had more intellectual capacity than previously thought. Some experts claim they’re the first known examples of Neanderthal rock art.

To the eye of a modern Internet user, it looks like nothing so much as a hashtag … #neanderthalsrock! But experts say this cross-hatched impression in the rock of Gorham’s Cave in Gibraltar – found by Ruth Blasco of the Gibraltar Museum and colleagues – represents the first known example of rock art by Neanderthals. More, they say it represents Neanderthals’ capacity for abstract expression.

All past cave art has been exclusively attributed to modern humans, who arrived in Western Europe around 40,000 years ago. Why do these researchers believe the cross-hatched pattern was made by Neanderthals, who first appeared in Western Europe between 200,000 and 250,000 years ago and were possibly extinct by 40,000 years ago? Because the rock engraving was overlain by undisturbed sediment in which Neanderthal artifacts had previously been discovered, suggesting that the rock engraving pre-dates the 39,000-year-old artifacts.

Further geochemical analysis of the mineral coating on the engraved grooves also suggests that the rock art was created before deposition of the overlying sediment.

These scientists took microphotographs of the tool marks within the engraving, compared the marks with experimental marks made with various tools, and determined that the abstract cave engraving was likely created intentionally by repeatedly passing a robust cutting tip over the rock in the same direction, and not by incidental cutting associated with other activities. They say:

The results add to evidence at other sites that Neanderthal intellectual capacity may have previously been underestimated.

The archaeological finds of Gorham’s Cave are controversially famous for their attribution to Neanderthals, suggested by some scientists to have inhabited the cave less than 40,000 years ago, a time by which many scholars think Neanderthals would have already become extinct, at least in present-day Western Europe. Gorham’s Cave has therefore become popularly albeit arguably known as the place where the “last Neanderthals” made their ‘last stand,’ so to speak, before complete extinction. Now, with the discovery of what these researchers suggest to be symbolic engraving, these Neanderthals may have possessed a cognitive capacity that has long been exclusively attributed to modern humans, who are theorized to have arrived on the European scene around 40,000 years ago.

Bottom line: Ruth Blasco of the Gibraltar Museum and colleagues have found what they say is the first known example of rock art by Neanderthals, in Gorham’s Cave in Gibraltar. They say the rock engraving represents Neanderthals’ capacity for abstract expression.