The eclipse is just 2 lunations away

As we approach another new moon, astronomer Guy Ottewell shares his profound understanding of lunar cycles and the coming total solar eclipse. 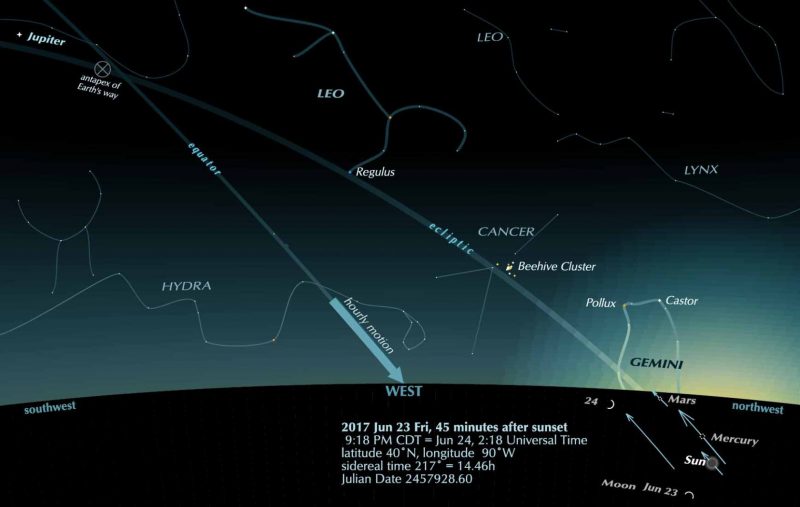 What is new in this view of Friday’s evening sky?

Not much: the scene is still of the Cancer-Leo-Virgo region, and Jupiter is still up there, slowly lowering toward the sun, behind which it will pass in October. And, as ever when looking to the left (east) of the sun, we can “see” the imaginary point called the antapex, away from which Earth is traveling at this time in its orbit.

One lunation – that is, one moon-cycle – later, on July 23, the moon will pass more closely south of the sun, and after one more lunation, on August 21, it will pass exactly enough in front to cause an eclipse – as almost everyone in the U.S.A., at least, must by now know. 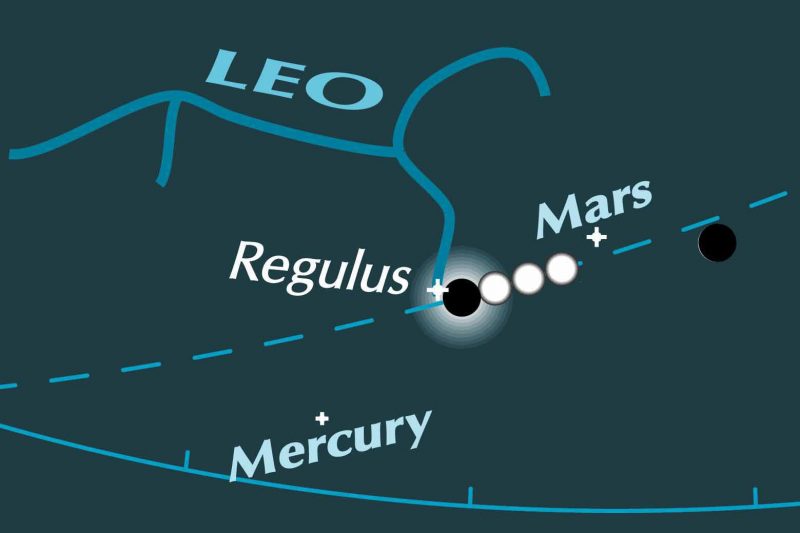 A foretaste of the August 21 eclipse. Detail from a sky chart in The Under-Standing of Eclipses. The sun is shown on August 15, 17, 19, and 21; the moon on August 20 and then August 21 when it blots out the sun. The dashed line is the ecliptic, the solid line is the celestial equator. Illustration via Guy Ottewell’s blog. Used with permission.

The present new moon (that of June) is one of those few in the year that happen close to perigee (the closest point of the moon’s orbit around Earth). The perigee is less than 16 hours before the new moment, the second closest of these coincidences in the year after that of May 25/26, when perigee was less than 6 hours after new. These coincidences of perigee with new (or with full) cause the moon’s orbit to be squeezed, so that the perigees are the nearest-in. The new moon we can now imagine underground would make a larger circle than the sun. On August 21 it will still exceed the sun in apparent width, thus causing a total eclipse; but not by so much, so that the total eclipse will not be one of those with the longest duration.

Our June new moon falls just after the midsummer solstice and just before two of those traditional dates that roughly marked the solstice: as listed in the Astronomical Companion section on quarter-days:

–June 23: St. John’s Eve, when Midsummer was celebrated in Europe with a great bonfire.
–June 24: St. John’s Day, in England the first day of the first quarter for collecting rent.

A friend (Wayles Browne) says there is a “mournful ring” to those words about the feast that “used to be celebrated”: should we revive it? With the temperatures in England at this end of this June, I don’t think I’d welcome a “great bonfire”; and probably you know of several very unwelcome recent conflagrations. Actually, I think fires do still go up in many countries to mark the birth of John the Baptist, who was said in the Gospel of Luke to have been born six months before Jesus, which is why his feast is six months before Christmas.