A fog blanketed London in December 1952, killing as many as 12,000 people. Its exact cause and nature puzzled researchers for decades … until now. 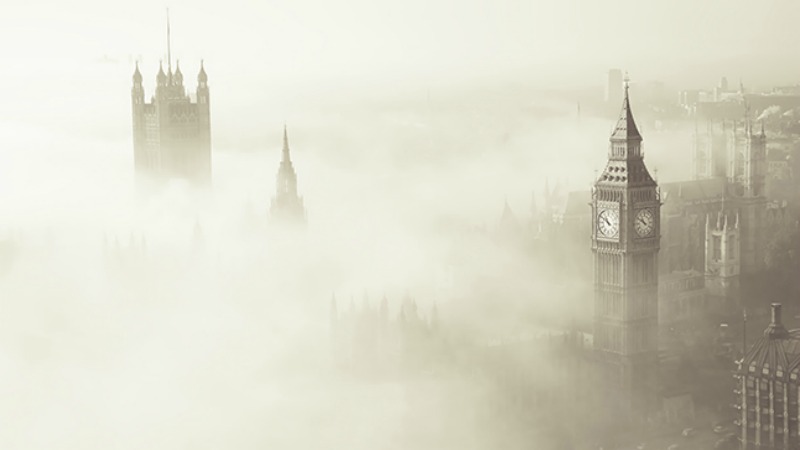 In 1952 a killer fog that contained pollutants covered London for five days, causing breathing problems and killing thousands of residents. The exact cause and nature of the fog has remained mostly unknown for decades, but an international team of scientists believes that the mystery has been solved. Their research, published in Proceedings of the National Academy of Sciences on October 9, 2016, also suggests that the same air chemistry also happens today in China and other places.

When the fog first arrived, in December of 1952, London residents gave it little notice because it appeared no different from the familiar natural fogs that have swept over Great Britain for thousands of years.

But over the next few days, conditions deteriorated, and the sky became dark. Visibility was reduced to only three feet in many parts of the city. All transportation was shut down and tens of thousands of people had trouble breathing. By the time the fog lifted on December 9, at least 4,000 people had died and more than 150,000 had been hospitalized, although recent British studies suggest that the death count was likely far higher – more than 12,000 people of all ages. Thousands of animals in the area were also killed.

It has long been known that many of those deaths were likely caused by emissions from coal burning, but the exact chemical processes that led to the deadly mix of fog and pollution have not been fully understood over the past 60 years.

The 1952 killer fog led to the passage of the Clean Air Act in 1956 by the British Parliament and is still considered the worst air pollution event in the European history.

Through laboratory experiments and atmospheric measurements in China, the team has come up with the answers. Texas A&M University researcher Renyi Zhang led the study. Zhang said in a statement:

People have known that sulfate was a big contributor to the fog, and sulfuric acid particles were formed from sulfur dioxide released by coal burning for residential use and power plants, and other means.

But how sulfur dioxide was turned into sulfuric acid was unclear. Our results showed that this process was facilitated by nitrogen dioxide, another co-product of coal burning, and occurred initially on natural fog. Another key aspect in the conversion of sulfur dioxide to sulfate is that it produces acidic particles, which subsequently inhibits this process. Natural fog contained larger particles of several tens of micrometers in size, and the acid formed was sufficiently diluted. Evaporation of those fog particles then left smaller acidic haze particles that covered the city.

The study shows that similar chemistry occurs frequently in China, which has battled air pollution for decades. Of the 20 most polluted cities in the world, China is home to 16 of them, and Beijing often exceeds by many times the acceptable air standards set by the U.S. Environmental Protection Agency. Zhang said:

The difference in China is that the haze starts from much smaller nanoparticles, and the sulfate formation process is only possible with ammonia to neutralize the particles.

In China, sulfur dioxide is mainly emitted by power plants, nitrogen dioxide is from power plants and automobiles, and ammonia comes from fertilizer use and automobiles. Again, the right chemical processes have to interplay for the deadly haze to occur in China. Interestingly, while the London fog was highly acidic, contemporary Chinese haze is basically neutral.

Zhang says China has been working diligently over the past decade to lessen its air pollution problems, but persistent poor air quality often requires people to wear breathing masks during much of the day. China’s explosive industrial and manufacturing growth and urbanization over the past 25 years have contributed to the problem.

Bottom line: Scientists believe they have finally solved the mystery of the killer fog that blanketed London for five days in December 1952, causing breathing problems and killing thousands of residents. The research, published in Proceedings of the National Academy of Sciences on October 9, 2016, also suggests that the same air chemistry also happens today in China and other places.