Scientists uncover how patients born without a corpus callosum can still communicate information between right and left brain.

Your brain is divided into two hemispheres – a left and a right. Because humans love a dichotomy, much fuss is made about how right and left differ (with poor left brain often cast as dully reliable straight man to right brain’s full-color creative genius). Much of this is overblown, but there is some division of labor between the two halves. For instance, speech is typically centered in the left brain. Additionally, each half is tasked with operating the opposite side of the body. But for most of us, such lateralization is no big deal because a handy bundle of fibers called the corpus callosum runs between the hemispheres and allows them to communicate with one another. So even though your (non-verbal) right brain controls your left hand, when you inadvertently place said left hand into some sticky goo on a bus seat, right brain communicates left hand’s tactile experience to left brain, thus allowing you to utter verbal commentary like, “gross” and “ewww” without issue. Team work. 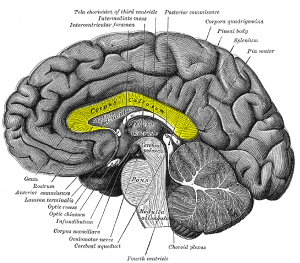 But not everyone has a fully operational corpus callosum. During the 20th century, doctors occasionally severed the structure deliberately as a last resort treatment for severe epilepsy. It was not a common procedure, but the small number of “split-brain” patients who emerged from it was sufficient to launch a series of fascinating studies. Much of what we know about differences between brain hemisphere function comes from the split-brain studies. In many ways surgical split-brain patients were behaviorally normal, but in some aspects it was clear that the two halves of their brains, once active collaborators, were now at odds. One of the common findings among surgical split-brain subjects was a phenomenon called “disconnection syndrome” in which the lack of communication between right and left brain made certain tasks difficult. Subjects asked to verbally identify an object experienced only by the right side of the body (i.e., touched with only the right hand and without looking) did fine. But when encountering an object via only their left side, they struggled to name it. The right brain had received the sensory input but, being the right brain, it was tongue-tied. Meanwhile the left brain, while generally having more of a way with words, was in the dark and thus also had nothing to contribute. Similar experiments with other sensory input supported the same conclusion: without a corpus callosum people can’t convey information from one side of the brain to the other.

Except that, well, some can. Not everyone without a working corpus callosum had it surgically cleaved. Some individuals are simply born without one (or with a drastically underdeveloped one) – a rare disorder called callosal dysgenesis (CD). Yet, unlike the surgical split-brain patients, the CD patients did not suffer from disconnection syndrome. They’d somehow managed to retain communication between their brain hemispheres in the absence of a normal corpus callosum, an observation that would puzzle scientists for decades to come. Now a group of researchers believe they’ve found alternate neural pathways that allow the brains of CD patients to work around their predicament. 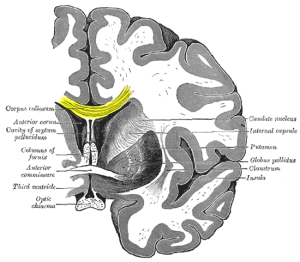 In a study published in Proceedings of the National Academy of Sciences (PNAS), the team used neural imaging techniques to examine both structure and functional activity  in the brains of CD patients compared to those of controls with no known brain abnormalities. Their results showed four notable structural differences (two of them previously unreported) in the form of anomalous bundles of neural fibers found in the brains of CD individuals but absent in the control group, which connected the parietal lobes of the brain.* Since structure alone doesn’t tell us whether the bundles actually do anything useful, the team also used resting state f-MRI imaging to examine the activity patterns in both hemispheres of the brain, and found that CD patients’ brains behaved very much like those of the controls. Additionally, CD patients in whom the anomalous brain structures were more pronounced had functional activity most similar to the control group, suggesting that the bundles helped pick up the slack of the missing corpus callosum.

The structural differences observed are not particularly subtle. Not the kind of small changes that occur constantly in adult brains in response to all manner of everyday stimuli. The authors believe that the anomalous pathways found in CD patients were layed down in utero, back when growing axons could still be diverted to build alternate connections. For the surgical split-brain patients it would have been too late for such restructuring, leaving their right and left hemispheres permanently estranged.

* The parietal lobes are where tactile recognition abilities live, thus the focus on the sensory input of touch versus sight or sound.