Spectacular rocket reentry over US West

Observers in the U.S. West saw a disintegrating meteor – a fireball, or extremely bright meteor – on July 27, 2016. It was the reentry of a Chinese rocket body.

People in California, Nevada, and Utah saw a huge meteor-like, disintegrating object in the sky on July 27, 2016. Ian Norman and his friends, who captured the video above (warning: profanity) from California’s Sierra Nevada mountain range recognized it as a satellite reentry. Experts from Aerospace.org say it was the reentry of a Chinese CZ-7 rocket body. The rocket had been launched from Wenchang Satellite Launch Center, China on June 25, 2016 on a technology demonstration mission.

The amazing reentry was seen near 9:38 pm PST and, because it was slowly crossing the skies, the event was recorded in video by several witnesses. You can see more videos by going to YouTube and using the search term July 27, 2016 fireball.

Here’s the American Meteor Society’s page on the July 27 event.

The Chinese rocket body designated as CZ-7 (41628) successfully carried to space the Tiange and Aoxiang small satellites, as well, as other small experimental modules.

When you see a disintegrating meteor-like object like this one, how can you tell whether it’s a human-made object or a natural space rock?

A disintegrating spacecraft will look like a spectacular meteor, but will look considerably slower upon reentry than natural meteors. The reentry might appear slow enough to allow you to announce it to people standing next to you, and even take video or pictures. This is something very difficult with much faster natural (space rocks or comet fragments) meteors.

Also, reentering spacecraft have shown significant fragmentation. Go back to the video at the top of this page, and notice the fragmentation around 1:05. 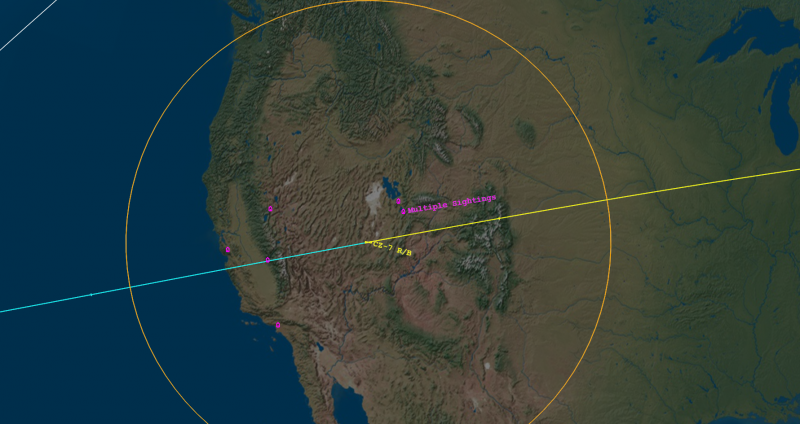 Path of reentry of Chinese CZ-7 rocket body on July 27, 2016 as described by Aerospace.org.

Bottom line: Observers in the U.S. West saw a huge fireball on July 27, 2016. It was the reentry of a Chinese rocket body.