September’s birthstone is the sapphire

Sapphires are typically blue stones, with the color caused by small amounts of titanium and iron in the crystal structure. But if the crystal contains different impurities, you might also see sapphires in gray, yellow, pale pink, orange, green, violet or brown. 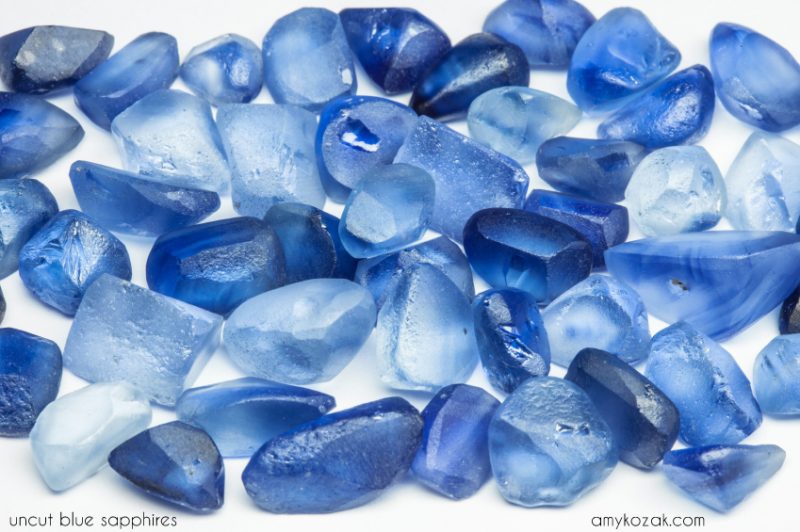 The sapphire, birthstone for September, is a relative of July’s birthstone, the ruby. Like ruby, it is a form of the mineral corundum, a normally drab gray mineral. Red corundum is called ruby, while all other gem quality forms of corundum are called sapphires.

Typically, sapphires appear as blue stones, ranging from very pale blue to deep indigo, due to the presence of small amounts of titanium and iron within the crystal structure. The most valued shade of blue is the medium-deep cornflower blue. Sapphires also occur in other natural colors and tints – colorless, gray, yellow, pale pink, orange, green, violet and brown – called fancy sapphires. These different colors are caused by different kinds of impurities within the crystal. For example, yellow sapphires get their color from ferric iron, and colorless gems have no contaminants. 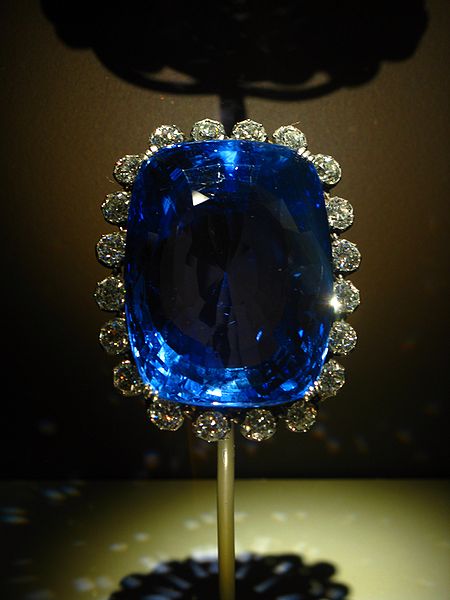 The Logan Sapphire Brooch, the second largest sapphire known (at 422.99 carats), is on display at the National Museum of Natural History in Washington, D.C. Image via Andrew Bossi.

The biggest source of sapphires world-wide is Australia, especially New South Wales and Queensland. Found in alluvial deposits of weathered basalt, Australian sapphires typically are blue stones with a dark and inky appearance. Kashmir, in India, used to be a well-known source of the cornflower-blue stones. In the United States, a major source is the Yogo Gulch Mine in Montana that mostly yields small stones for industrial use.

The word sapphire has its roots in several ancient languages: the Arabic safir, the Latin sapphirus (meaning blue), and the Greek word sappheiros for the island of Sappherine in the Arabian Sea where sapphires were found in ancient Grecian times. Ancient Persians called sapphire the “Celestial Stone.” It was the gem of Apollo, Greek God of prophecy, and was worn by worshipers visiting his shrine in Delphi to seek his help. It was used by ancient Etruscans as far back as the 7th century B.C.

The sapphire was said to represent the purity of the soul. Before and during the Middle Ages, it was worn by priests as protection from impure thoughts and temptations of the flesh. Medieval kings of Europe valued these stones for rings and brooches, believing that it protected them from harm and envy. Warriors presented their young wives with sapphire necklaces so they would remain faithful. It was believed that the stone’s color would darken if worn by an adulterer or adulteress, or by an unworthy person.

Sapphires were once believed to be protection against snakes. It was said that if poisonous reptiles and spiders were placed in a jar containing the stone, the creatures would immediately die. The French of the 13th century believed that sapphire transformed stupidity to wisdom, and irritability to good temper.

One of the most famous sapphires rests on the Imperial State Crown worn by Queen Victoria in 1838. It resides in the British Crown Jewels in the Tower of London. This gem is called the St. Edward’s Sapphire because it once belonged to Edward the Confessor, who wore the stone on a ring during his coronation in 1042.

Bottom line: The birthstone for September is the sapphire.