Seeing a dragon in a patch of clouds or a face on the moon, are examples of what’s called pareidolia. Take a look at these photos to test your own abilities to recognize patterns. 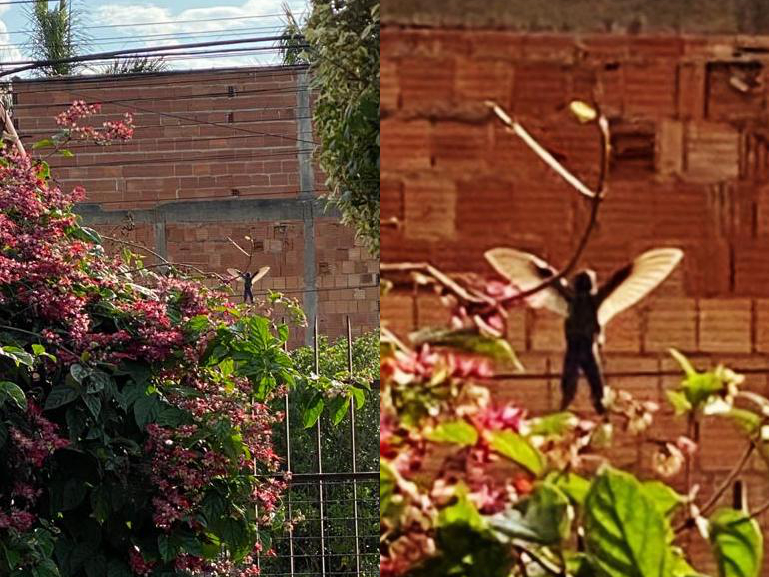 View at EarthSky Community Photos. | Helio C. Vital of Rio de Janeiro, Brazil, wrote: “A friend of mine, Professor Eliane Teixeira Mársico, who is a veterinarian and a food engineer, was taking photos of her yard when she saw a hummingbird. She was struck by what she got: a remarkable example of pareidolia. The image greatly resembles a little winged male figure (a male fairy, as mystics could say) floating over her home garden.” Thank you, Eliane and Helio! Image by Eliane Teixeira Mársico.

Maybe you’ve seen the proverbial bunny in the clouds on a warm summer day, or the face of a clown in a mud splatter on the side of your car? Seeing familiar objects or patterns in otherwise random or unrelated objects or patterns is called pareidolia. It’s a form of apophenia, which is a more general term for the human tendency to seek patterns in random information. Everyone experiences it from time to time. Seeing the famous man in the moon or the canals on Mars are classic examples from astronomy. The ability to experience pareidolia is more developed in some people and less in others. Look at the photos below to learn more and test your own ability to see things that aren’t there. 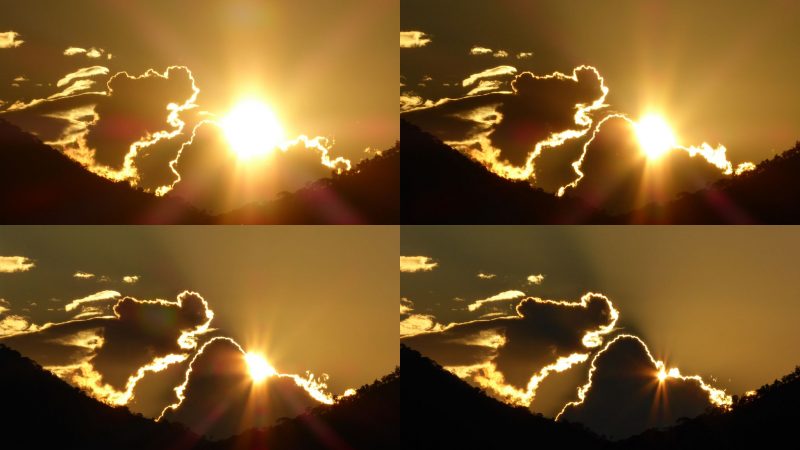 View at EarthSky Community Photos. | Peter Lowenstein in Mutare, Zimbabwe, captured these images on April 16, 2020. He wrote: “… the sunset was accompanied by the appearance of some pareidolic cumulus clouds which appeared to encroach on and devour the setting sun!” Read more about these images or see them as a video. Thank you, Peter! 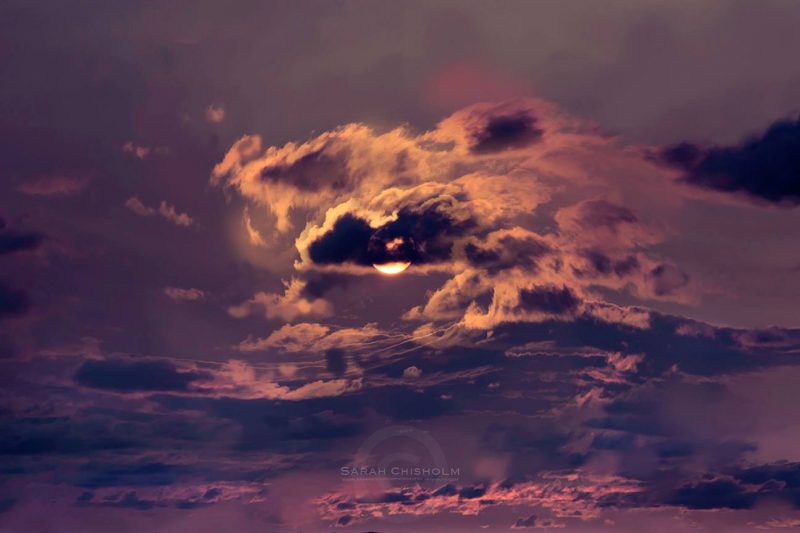 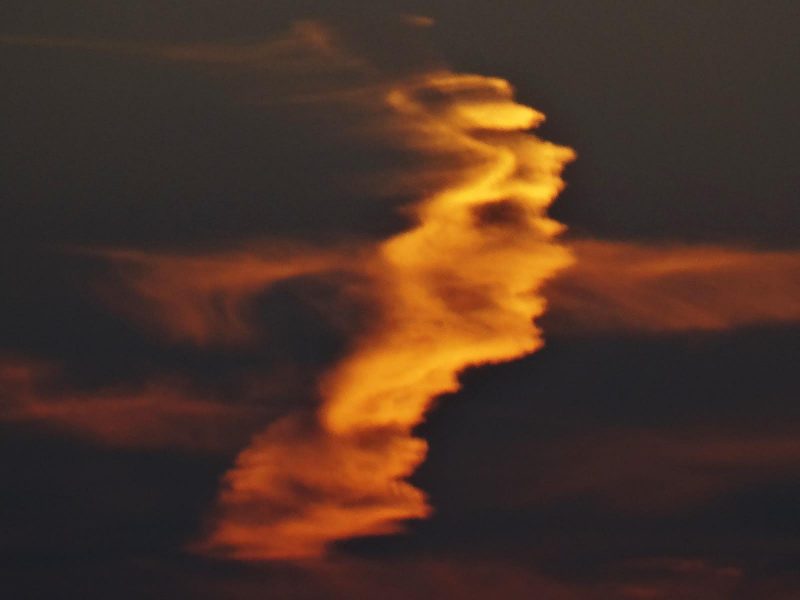 A woman’s face in the clouds, floating above the sea, as captured from Saquarema, Brazil, by Helio C. Vital. 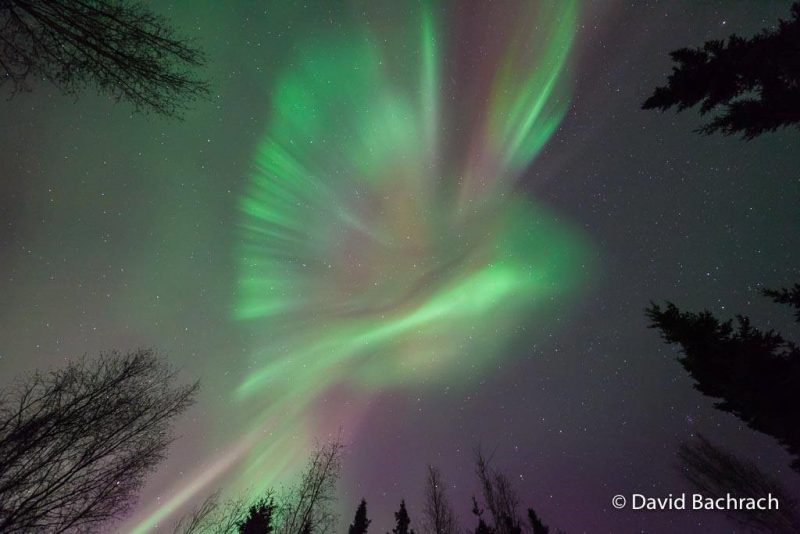 Can you see a bird in flight in this photo? It’s a photo of the aurora borealis taken near Fairbanks, Alaska, by Dave Bachrach. Used with permission. 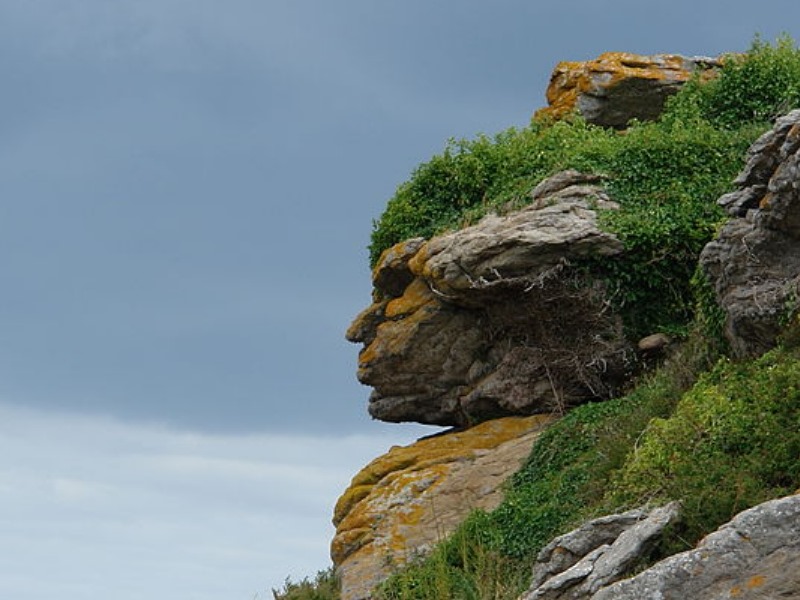 Erwan Mirabeau shot this rock formation in Ebihens, France. It’s reminiscent of a green haired man, known in the area as an Apache. Photo via Wikimedia Commons. 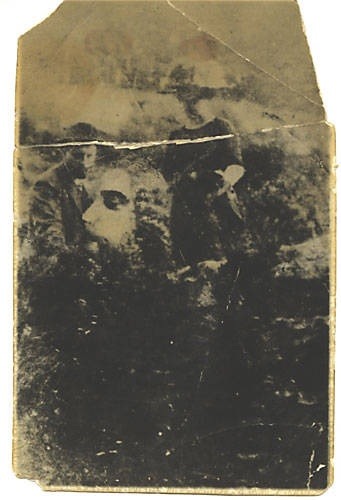 The “face of Jesus” in this photo is actually a child with a bonnet, and the hair is vegetation in the background. Anonymous Swedish photograph from the late nineteenth century via Wikimedia Commons.

Sometimes the ability to see objects in photos, where no such objects exist, has results that are not simply beautiful or intriguing, but downright bizarre. For example, consider the old photo above from an anonymous Swedish photographer of the 19th century.

In the image above, many viewers will immediately see the image of a bearded man with wavy hair, which could be interpreted as Jesus, near the left center of the image. In fact, however, the face is just a phenomenon of light, shadow and placement. The “face of Jesus” is actually a child with a bonnet, and the hair is vegetation in the background.

You have probably have seen claims of images of Jesus in a piece of toast, or the Madonna in the misshapen form of a gourd. Although intrinsically meaningless, such images are sometimes striking. More often, though, the similarity to known persons, animals or objects is a bit more subtle.

Pareidolia of dog on closet door by Chad Johns. Photo used with permission. 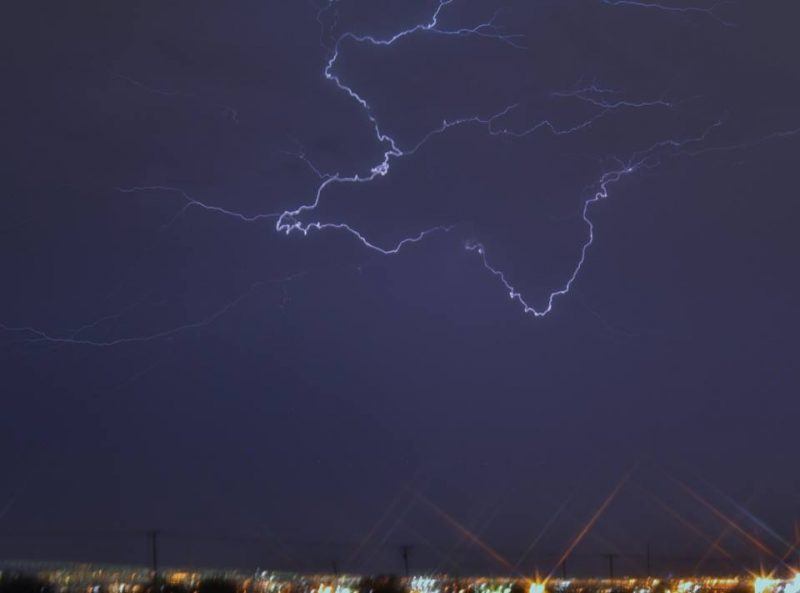 Ty Lawrence in Las Vegas, Nevada, contributed this photo. We posted it at EarthSky Facebook and asked people what it looked like to them. We got many answers. Puppy. Dragon. Dog. Map of the Mediterranean Sea. But most people said “bird.” Thanks, Ty! 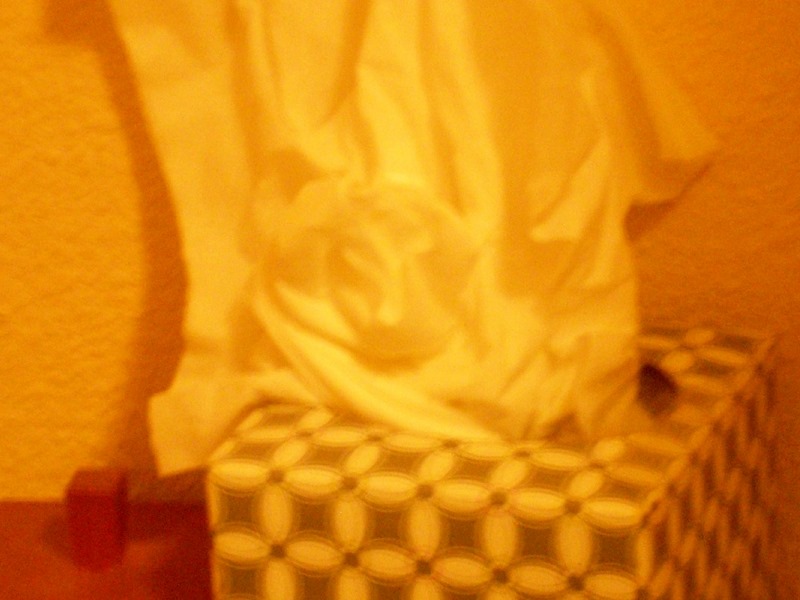 What can you see in the folds of this tissue? Many people will not see anything. It depends, in part, on the innate ability to see patterns, and in part on the natural inclinations and interests of the viewer. In some cases the image will immediately pop out, while for some folks it will come after a little close examination, and others may not be able to see it at all. 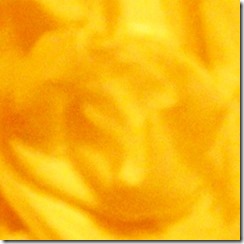 Here’s a close-up. Do you see the head of a Dachshund?  Don’t worry if you can’t, but for many the ears, eyes and snout will seem obvious.

To a certain extent, the definition of pareidolia can be used to describe how the ancients connected the dots and came up with the patterns we know as constellations. It does not take a great deal of imagination to see a lion in Leo, a scorpion in Scorpius, or a mighty hunter in Orion. To be honest, many other constellations, such as Cancer the Crab or Capricornus the Sea Goat, stretch the pattern recognition idea a bit far, making the naming process more one of contrivance than of pareidolia.

Staying in the realm of astronomy for a bit, many have seen a face or a rabbit in the moon or any of a variety of other figures on the face of the moon for ages. Nowadays, technology has given us close-ups of other planets that serve as fodder for the pareidolia monster.

Here’s the so-called “face on Mars” as originally captured in a 1976 image from the Viking 1 orbiter. Click here to see how subsequent spacecraft revealed the “face” to be simply a play of light and shadows. 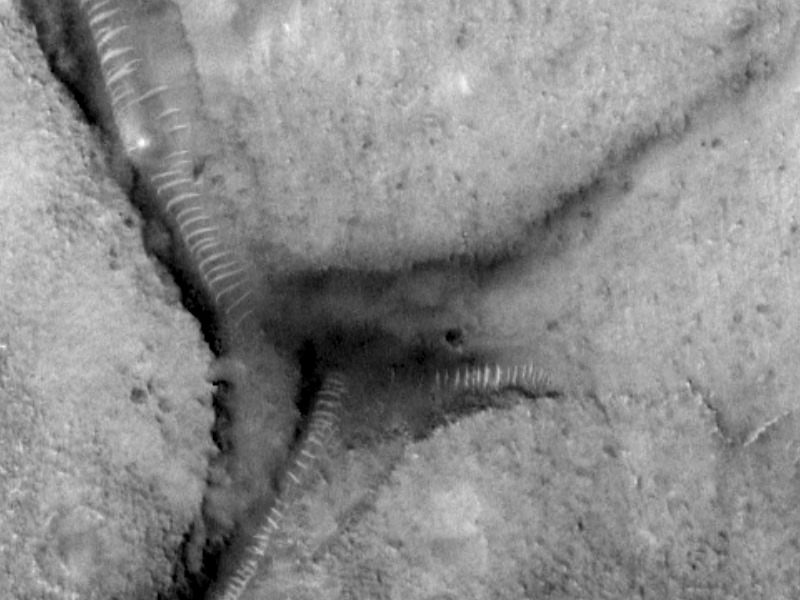 Glass tunnels or “ice worms” on Mars? In fact, these Martian canyons contain crescent-shaped sand dunes, which are formed when the wind is predominantly from one direction.

For example, some self-appointed experts have stated that the image above – which is an enlargement of a small section of image M0400291 from the Mars Global Surveyor – shows large glass tunnels on Mars, or even evidence for ice worms on the red planet. What the image above really shows is a convergence of deep canyons on the planet Mars. At the bottom of these canyons are crescent-shaped sand dunes, which are formed when the wind is predominantly from one direction. Such dunes are common in desert areas of the Earth and are known as barchans.

People have found many imaginary images in this photo of the atomic cloud over Nagasaki – August 9, 1945 – from Koyagi-jima by Hiromichi Matsuda. Photo via Wikimedia Commons.

Although deliberately manipulated (“photoshopped”) photos are very easily made today and cannot be ruled out for many pareidolia images, hoaxes are considerably less likely in older images. Consider the old Swedish image above in which the “face” of Jesus is actually a baby with a bonnet. Or consider the image above from the Nagasaki Atomic Bomb Museum, shot by Hiromichi Matsuda, showing the mushroom cloud over the city just 20 minutes after detonation.

With just a casual glance, most people will notice nothing in the bomb cloud other than the expected shape. But for someone with an eye for pareidolic images, several things can pop out. Let’s consider just one, that the head of an apparently sleeping woman with 1940s-style hair, facing the right from just left of the top center area of the cloud.

Go ahead, try to see the lady’s face before you look farther down. Truth be told, there are a number of things to be seen in this image, but the point to make is that these are all purely coincidental. There is absolutely no reason to believe that any of the images have any meaning whatsoever except the meaning that an active and creative mind may give them. They are not symbols or signs from the spirit world. They are not warnings about the future or indications of the waywardness of our ways. They are simply the result of coincidental patterns that the human mind chooses to interpret in particular ways.

It goes without saying, I hope, that this just happens to be a photo from the tragic bombing of Nagasaki, but has nothing else to do with Nagasaki or even with the atomic bomb. Similar patterns can be found in many many other images and natural formations.

In some ways, the pareidolic images we discover tend to indicate things about which we are most interested, whether they be people, puppies or planes. Finding such “embedded” images can fun and interesting, almost a hobby for some. But for some they can also fuel obsessiveness and paranoia. Enjoy finding your own pareidolic images, but keep in mind that what you are seeing is not really there, but in your mind.

Now, if you did not successfully see the lady in the Nagasaki image, you can get some help from the annotated image above. (Can you also see the puppy in her hair?)

Bottom line: Seeing recognizable images in otherwise random or unrelated objects or patterns is called pareidolia. Here are photos of many examples of pareidolia in nature.