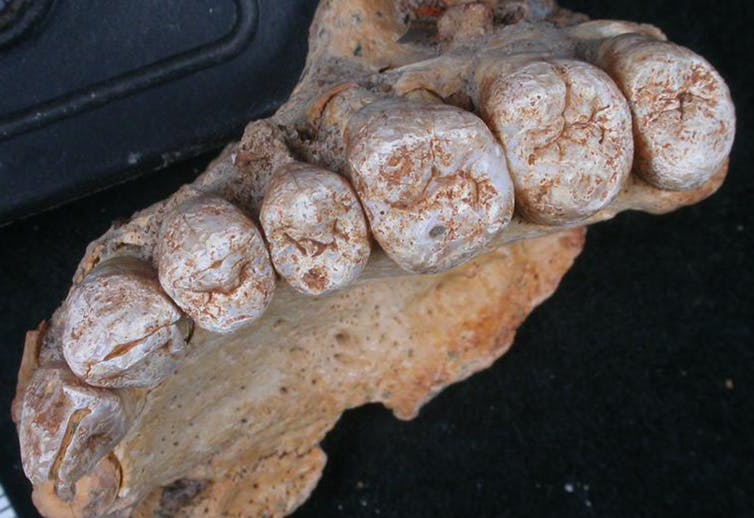 Fossilized teeth from a modern human who lived in Israel close to 200,000 years ago. Image via Israel Hershkovitz, Tel Aviv University.

New fossil finds over the past few years have been forcing anthropologists to reexamine our evolutionary path to becoming human. Now the earliest modern human fossil ever found outside the continent of Africa is pushing back the date for when our ancestors left Africa.

The fossil, an upper left jawbone with most of the teeth attached, comes from Misliya Cave in Israel and dates to 177,000-194,000 years ago. This is considerably older than any other remains from our own species, Homo sapiens, ever discovered outside of Africa, and it coincides with several other recent studies that are changing the view on our evolutionary origins and migration throughout the Old World.

African origins, then spreading from there

The earliest humans, referred to as hominins by anthropologists, lived around six to 7 million years ago in Africa. These early evolutionary ancestors are recognized as belonging to the human family mainly because their bones reveal clear signs of bipedalism: They walked on two feet. It was not until around 2 million years ago that human ancestors first migrated out of Africa and spread throughout the Old World.

Up until recently, anthropologists generally held that Homo sapiens first appeared around 200,000 years ago, in Africa. This was based on findings from genetic studies as well as fossil discoveries. Two sites in Ethiopia, Herto and Omo Kibish, have yielded early Homo sapiens fossils dated to between 160,000-195,000 years ago. 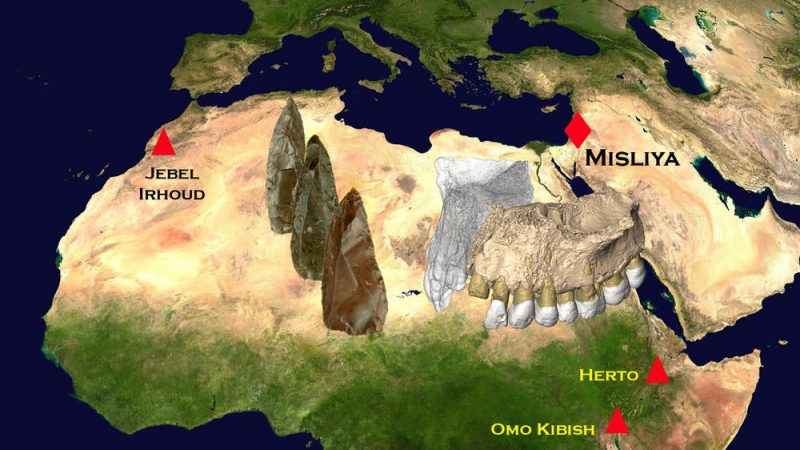 Early modern human fossils from Morocco are older than the new find from Misliya, which is similar in age to fossils from Ethiopia. Overlaid on the map are a 3-D virtual reconstruction of the Misliya-1 jawbone and several Early Middle Paleolithic stone tools also found in the cave. Image via Rolf Quam, Binghamton University, modified from “Blue Marble.”

But in June of 2017, researchers dated fossils from the site of Jebel Irhoud in Morocco to around 315,000 years ago and attributed them to an early phase of Homo sapiens evolution. This unexpectedly early date pushed back the origin of our species by over 100,000 years.

Until recently, the earliest human fossils from our own species discovered outside of Africa dated to around 90,000-120,000 years ago. Two cave sites in Israel – Qafzeh and Skhul – have yielded numerous skeletons of early modern humans. The age of these sites would suggest that our species was restricted to Africa for as long as 200,000 years before migrating out of the continent. Other sites with Homo sapiens fossils from Asia and Europe are generally younger than the finds from the Middle East.

Now an international research team, of which I was a member, has reported finding an early modern human fossil at Misliya Cave in Israel dating as far back as 177,000-194,000 years ago. This date pushes back our species’ exodus from Africa by over 50,000 years. 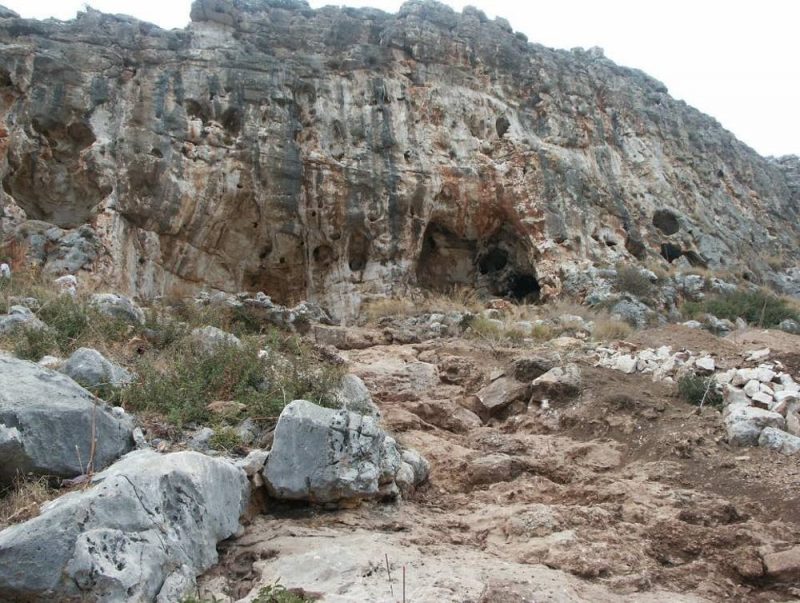 Misliya Cave is part of a series of prehistoric cave sites located along the western slopes of Mount Carmel, Israel. Image via Mina Weinstein-Evron, Haifa University.

The Misliya fossil is just part of one individual’s jawbone. To understand the significance of the find, we needed to be sure about when this individual lived and also what species they belonged to.

To start with, the stone tools associated with the fossil, of a type known as the Early Middle Paleolithic, indicated a considerable antiquity for the specimen. Similar tool kits from other sites in the Middle East generally date to older than 160,000 years ago. To establish the jawbone’s age more precisely, several independent dating techniques were applied to the fossil itself as well as the stone tools and sediments at the site. The results came back with ages that ranged between 177,000-194,000 years ago.

To diagnose which species the Misliya fossil might represent, we studied the original fossil using both traditional anthropological approaches as well as the latest technological advances. We micro-CT scanned and made 3-D virtual models of the specimen to visualize the internal structures of the teeth and quantify their shapes more precisely. The results of these analyses demonstrated very clearly that the Misliya fossil is a member of our own species. 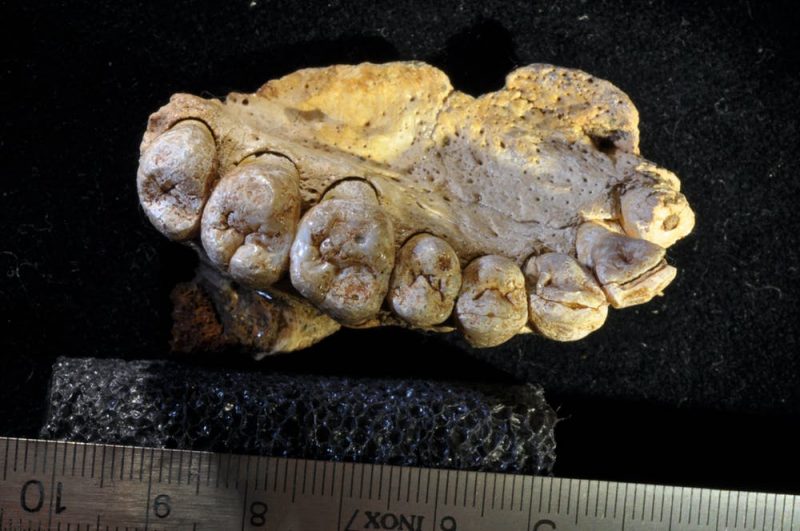 A close-up view, showing details of the crown topography and dental features. Image via Gerhard Weber, University of Vienna.

Our study found these teeth lack several features that are found in earlier human species, including the Neanderthals. One of these characteristics is a thickening of the tooth crown along the edges on the inside surface of the incisor and canine. Anthropologists call this trait shoveling. We see shoveling on the teeth of previous species of hominins from before modern humans evolved. But we didn’t see it in the teeth from Misliya, supporting the idea that this jaw is from a Homo sapiens individual. Today some modern human populations actually do have shoveling on their teeth, while others do not; but in the fossil record, the only species that does not show shoveling is Homo sapiens.

Another trait we looked for is a small cusp at the base of the tooth crown on the inside surface of the incisor and canine. This feature is commonly seen in Neanderthals, but is absent in the Misliya fossil.

It’s the absence of these two dental features in the Misliya fossil, together with information from the other teeth and the jawbone itself, that tells us it came from a Homo sapiens.

Fitting more pieces into the puzzle

The findings at Misliya coincide with a recent genetic study that offered tantalizing evidence for the influx of genetic material into the Neanderthal gene pool from Africa. The researchers relied on ancient mitochondrial DNA extracted from a Neanderthal femur (leg bone) discovered in Germany. The African species involved was not clear, but the older dates for the earliest Homo sapiens fossils at Jebel Irhoud in Morocco make it clear that modern humans were already present in Africa at this time. These genetic results suggest the possibility of an earlier modern human migration out of Africa – at least as far back as 220,000 years ago and probably earlier.

While the Misliya fossil is younger than this, it provides the first fossil evidence confirming that modern humans left Africa considerably earlier than previously believed. This series of recent studies and discoveries from disparate sources are providing new insights into our own origins and dispersal around the globe.

Bottom line: The earliest modern human fossil yet found outside Africa is pushing back the date for when our ancestors left Africa.