It’s the first documented case of a child born with HIV and later cured with aggressive drug treatment.

The story broke yesterday (March 3, 2013) that scientists at Johns Hopkins University have announced what they say is the first documented case of a child being cured of HIV. Deborah Persaud of Johns Hopkins University described the finding the 2013 Conference on Retroviruses and Opportunistic Infections in Atlanta, Georgia. Dr. Persaud described the case of a two-year-old child in Mississippi diagnosed with HIV at birth and immediately put on antiretroviral therapy. According to a press release from amfAR (The Foundation for AIDS Research): 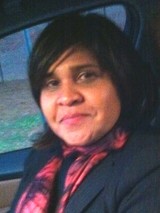 Dr. Deborah Persaud of Johns Hopkins described the case of a child born with HIV, who is now cured.

At 18 months, the child ceased taking antiretrovirals and was lost to follow-up. When brought back into care at 23 months, despite being off treatment for five months, the child was found to have an undetectable viral load.

Dr. Persaud and Dr. Katherine Luzuriaga of the University of Massachusetts had been awarded a grant by amfAR to work with other researchers in exploring and documenting possible pediatric HIV cure cases. Dr. Rowena Johnston, amfAR vice president and director of research, said:

The child’s pediatrician in Mississippi was aware of the work we were doing, and quickly notified our team as soon as this young patient’s case came to her attention … the researchers were able to mobilize immediately and perform the tests necessary to determine if this was in fact a case of a child being cured.

A battery of subsequent highly sensitive tests confirmed the child was cured of HIV. 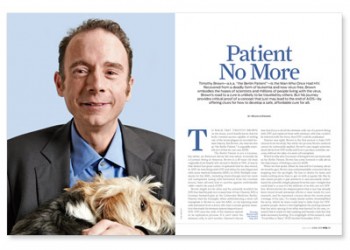 Timothy Brown, the so-called Berlin Patient, is the only other documented case of an HIV cure so far. His case was very different from that of the child studied by Persaud and her colleagues. Image via poz.com. Read a digital version of poz.com’s June 2011 article about Timothy Brown here.

The only other documented case of an HIV cure to date remains that of Timothy Brown, sometimes called the “Berlin patient.” In 2006, while on treatment for HIV, Mr. Brown was diagnosed with leukemia. His physician was able to treat his leukemia with a stem-cell transplant from a person who was born with a genetic mutation causing immunity to HIV infection. Following the transplant, Mr. Brown was able to stop HIV treatment without experiencing a return of his HIV disease.

According to amfAR’s March 3, 2013 press announcement:

This new case points to the tantalizing possibility that different populations of HIV-positive people might be cured in different ways. While Mr. Brown’s case was the outcome of a complex, high-risk, and expensive series of procedures, this new case appears to have been the direct result of a comparatively inexpensive course of antiretroviral therapy. 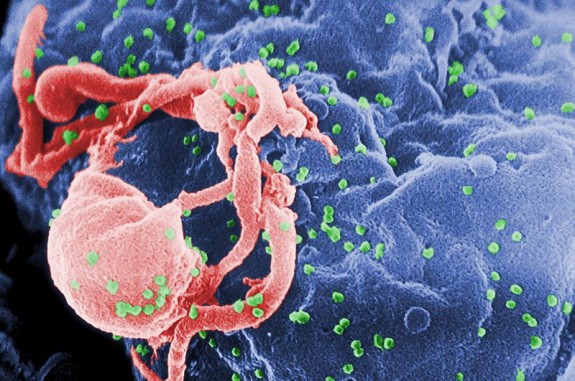 Scanning electron micrograph of HIV-1 (in green) budding from cultured lymphocyte. Multiple round bumps on cell surface represent sites of assembly and budding of virions, which are the complete, infective forms of a virus outside a host cell. Image via Wikimedia Commons

Bottom line: John Hopkins medical researcher Dr. Deborah Persaud and her colleagues have now described the first known case of a child born with HIV, who has now been cured. The only other documented case of an HIV cure to date remains that of Timothy Brown, sometimes called the “Berlin patient.” Persaud and her colleagues say their work confirms the idea that different populations of HIV-positive people might be cured in different ways.