The first detailed map of the brain regions that contribute to our ability to process emotional information and navigate the social world.

Researchers studied 152 Vietnam veterans with combat-related brain injuries to create the first detailed map of the brain regions that contribute to what’s called emotional intelligence – the ability to process emotional information and navigate the social world. 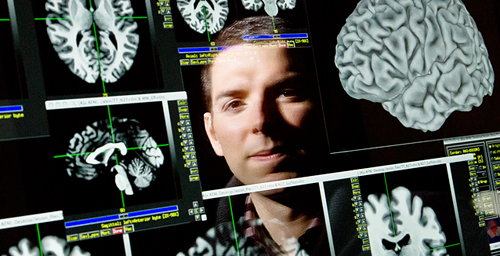 In the study, researchers pooled data from CT scans of participants’ brains to produce a collective, three-dimensional map of the cerebral cortex. They divided this composite brain into 3-D units called voxels. They compared the cognitive abilities of patients with damage to a particular voxel or cluster of voxels with those of patients without injuries in those brain regions. This allowed the researchers to identify brain areas essential to specific cognitive abilities, and those that contribute significantly to general intelligence, emotional intelligence, or both.

They found that specific regions in the frontal cortex (behind the forehead) and parietal cortex (top of the brain near the back of the skull) were important to both general and emotional intelligence. The frontal cortex is known to be involved in regulating behavior. It also processes feelings of reward and plays a role in attention, planning and memory. The parietal cortex helps integrate sensory information, and contributes to bodily coordination and language processing.

The study appears in the journal Social Cognitive & Affective Neuroscience.