Scraps of aluminum from the site of the September 11 terrorist attacks were incorporated into two Mars Rovers as a quiet tribute to the tragedy.

The planet Mars is now home to a piece of the demolished World Trade Center in New York City.

A decade ago, engineers working with NASA turned a scrap of aluminum recovered from the site of the September 11, 2001, terrorist attacks into cable shields. The shields now protect rock abrasion tools on two Mars Rovers, named Spirit and Opportunity. These quiet tributes to the victims of 9/11 left Earth in 2003 and 2004. 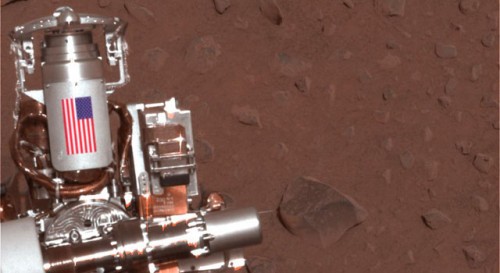 The piece of metal with the American flag on it in this image of a NASA rover on Mars is made of aluminum recovered from the site of the World Trade Center towers in the weeks after their destruction. Image credit: NASA/JPL-Caltech/Cornell University

The story of how aluminum from the demolished towers of the World Trade Center (WTC) wound up being incorporated into the Mars Rovers is an interesting one. The tale involves robotics engineer and Rover team member Stephen Gorevan. He was riding his bike in lower Manhattan when a plane hit the WTC on September 11, 2001. He told NASA:

Mostly, what comes back to me even today is the sound of the engines before the first plane struck the tower. Just before crashing into the tower, I could hear the engines being revved up as if those behind the controls wanted to ensure the maximum destruction. I stopped and stared for a few minutes and realized I felt totally helpless, and I left the scene and went to my office nearby, where my colleagues told me a second plane had struck. We watched the rest of the sad events of that day from the roof of our facility.

The final death toll in the September 11, 2001, terrorist attack on the Twin Towers of the World Trade Center was 2,752 people. Image Credit: UpstateNYer/The Machine Shops

That morning, Gorevan and his team were set to work on the Rovers’ abrasion tools at the Honeybee Robotics studios on Elizabeth Street, located six blocks away from the site of the Towers. They had to suspend operations for a few days as New York City collected itself. But, very shortly afterwards, Gorevan’s team resumed activity. (As NASA poetically notes, the robotics engineers were working around launch dates that were “governed by the motions of the planets.”)

While the Honeybee engineers were happy to be back at work, they were frustrated by not being able to assist with 9/11 volunteer efforts. So, Steve Kondos, who was, at the time, a Jet Propulsion Laboratory (JPL) engineer working with the Honeybee team, came up with the idea of embedding some kind of “interplanetary memorial” on the Rovers:

To carry out the idea, an early hurdle was acquiring an appropriate piece of material from the World Trade Center site. Through Gorevan’s contacts, a parcel was delivered to Honeybee Robotics from the mayor’s office on December 1, 2001, with a twisted plate of aluminum inside and a note: “Here is debris from Tower 1 and Tower 2.”

Tom Myrick, an engineer at Honeybee, saw the possibility of machining the aluminum into cable shields for the rock abrasion tools. He hand-delivered the material to the machine shop in Texas that was working on other components of the tools. When the shields were back in New York, he affixed an image of the American flag on each.

The Mars Rover team waited until 2004 to reveal that they had used 9/11 scrap metal on the Rover. They wanted the inclusion to be what they called a “quiet tribute.” 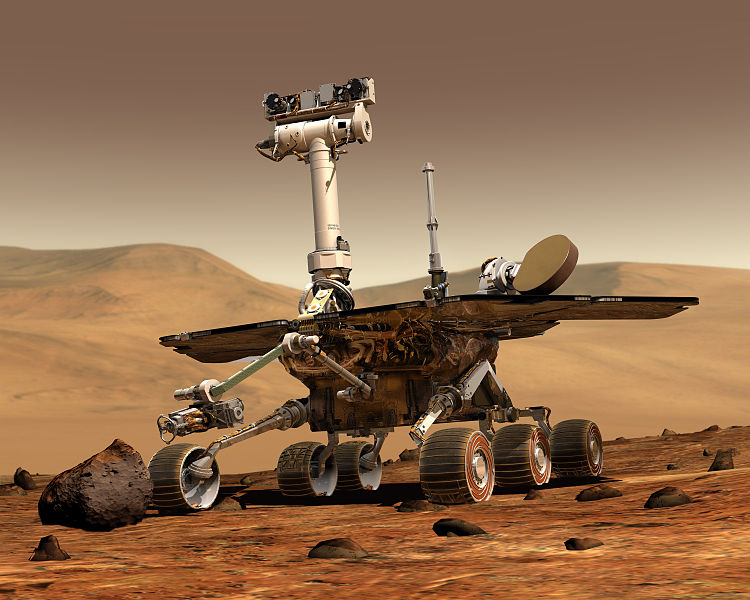 The Rovers launched early last decade and, throughout their course of service, they helped scientists make discoveries about wet environments on ancient Mars that could have supported microbial life.

Spirit ended communications in March 2010. Opportunity is still going strong, and its rock abrasion tool is being used to explore a large crater that the rover reached in August of 2011. Gorevan noted:

It’s gratifying knowing that a piece of the World Trade Center is up there on Mars. That shield on Mars, to me, contrasts the destructive nature of the attackers with the ingenuity and hopeful attitude of Americans.

Sometime soon, both the Rovers will fall silent. But their aluminum tribute to 9/11’s victims will survive on the cold surface of the desert world Mars for millions of years to come.

Bottom line: Around a decade ago, engineers incorporated a scrap of aluminum recovered from the site of the 9/11 terrorist attacks into two Mars Rovers. The Rovers – and their quiet tribute to the 9/11 victims – have been on the surface of Mars for much of this decade, exploring the Martian surface.

Where are the Rovers now?