Check out this peregrine falcon webcam

An EarthSky community member – Jody Kuchar – alerted us to the webcam, which is based in Wisconsin. Thank you, Jody! 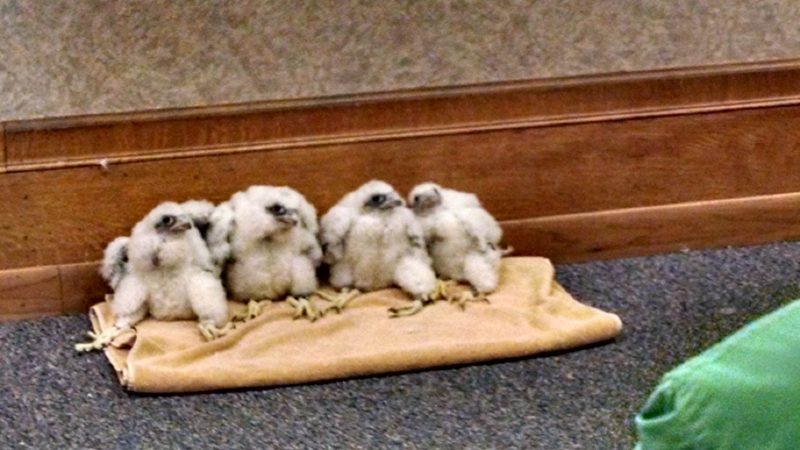 View at EarthSky Community Photos. | Jody Kuchar captured this image from the Briess webcam in mid-2018. She wrote: “Class of 2018 peregrine falcons on banding day.” Thank you, Jody! View the live webcam now.

In 1992, the Briess Malt and Ingredients Company installed a peregrine falcon nest at the top of the 244-foot (74-meter) Briess Elevator in Manitowoc, Wisconsin. Since then, the nest has been home to multiple breeding pairs of falcons and has produced more than 60 eyasses (young falcons). Briess installed a webcam in 2015. It streams to a webpage that’s open to anyone wishing to watch the birds. Briess wrote:

Founded by Greg Septon, a former researcher at the Milwaukee Public Museum, the Recovery Program was developed to re-populate peregrine falcons. They were put on the U.S. Endangered Species list in 1969 after being almost eradicated by the pesticide DDT. After DDT was banned in 1972, it cleared the path for the re-population effort.

The Manitowoc elevator, acquired by Briess in 2014, was one of many Wisconsin locations that erected nesting boxes at the request of Mr. Septon. In 1998, it attracted its first pair of nesting falcons. Since then, peregrines have been successfully nesting in the elevator…

Briess said the Recovery Program and similar groups in other regions are making progress. While the peregrine population had been completely eradicated east of the Mississippi River by the late 1960s, today there are an estimated 1,650 breeding pairs in the U.S. and Canada. For more information about the Manitowoc nest and peregrine activity, visit the Briess blog.

By the way, the peregrine falcon is the fastest bird – and in fact the fastest animal on Earth – when in a dive. View a video of a diving falcon, from the bird’s perspective!