Researchers find that whether you live in a rural or urban environment, your sleep patterns are affected by the full moon. On the nights leading up to full moon, people fall asleep later and sleep less overall.

Full moon is coming up this weekend, and, as you might know, superstitions about full moons abound. Many lunar effects have been debunked, but some are still being studied. A new study published in late January, 2021 at the peer-reviewed journal Science Advances now shows a correlation between the moon cycle and the amount of sleep you’re getting. In other words – if it feels like you’re going to bed later, and sleeping less overall, around the time of full moon – this study has your back.

The study – conducted by scientists at the University of Washington, the National University of Quilmes in Argentina and Yale University – analyzed sleep patterns in two very different locales: first, the Toba/Qom communities of rural Argentina, where people have little to no access to artificial light sources, and second, a community of college students living in downtown Seattle, Washington. Their results show that, even in urbanized locations where the full moon is drowned out by city lights, people’s sleep patterns are influenced by the phases of the moon.

In the nights leading up to a full moon, the waxing gibbous moon is rising in the evening sky, brightening the night and providing more light for activities to extend past daylight hours. Historically, people would spend more hours outside after dark around the time of a waxing gibbous or full moon. The best-known example of a full moon that lights up human activity is probably the full Harvest Moon. It happens in the autumn months when, for several nights in a row around the time of full moon, there’s no long period of darkness between sunset and moonrise. And, of course, autumn is also harvest time, so farmers would gather in their crops by the light of the moon.

This extension of the day around the time of full moon is especially pronounced in autumn. But full moons come in a regular 29.5-day cycle. And now we learn that, according to one study at least, the moon phases seem related to humans’ sleep and wake patterns.

So when are the full moons? Keep track with EarthSky’s lunar calendar. Order yours before they’re gone! 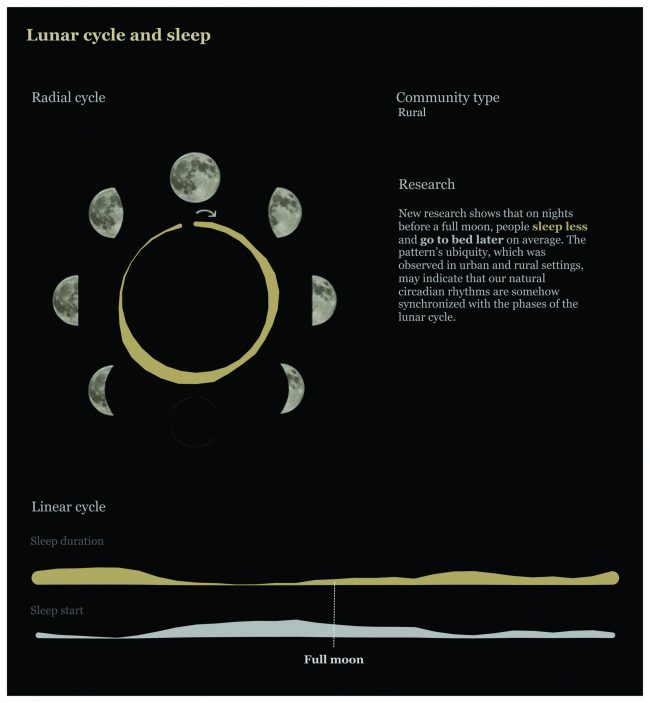 This diagram shows how people go to sleep later and sleep less overall on nights leading up to a full moon. Image via Phys.org, Rebecca Gourley/ University of Washington.

In preindustrial society, humans’ lives revolved around sunrise and sunset. When it was dark, it was not safe to hunt or gather food. But with the advent of artificial light, humans could change their sleep and wake patterns to new demands.

Humans and animals are both subject to circadian rhythms, 24-hour cycles that dictate when wakefulness and sleep occur. The cycles are tied to light, with sunlight waking diurnal creatures and sending nocturnal animals back to their lairs.

Scientists who participated in the study showed that the oscillation patterns in people’s sleep coincided with moon phases. These researchers, led by University of Washington professor of biology Horacio de la Iglesia, reported that from three to five days leading up to a full moon, people tend to go to bed later in the evening and sleep less overall. Participants in the study wore wristwatches that monitored their activity.

The study showed that whether the people are in a dark rural environment or an urban environment where moonlight is not as much of a factor compared to the lights of the big city, their test subjects still followed the pattern of falling asleep later and sleeping less in the week leading up to full moon. This means that even if you are not aware of the moon phase, it still probably has an affect on you.

In the nights following full moon, when the waning moon rises later in the evening after people have already fallen asleep, the researchers found no effect on the sleep patterns of people studied.

Future sleep researchers will probe questions of the full moon’s effect on our circadian rhythms.

For now, if you find yourself tossing and turning on nights leading up to a full moon, no need to stress. It may be just a remnant behavior left behind by your ancestors. You can blame them … or you can blame the full moon. 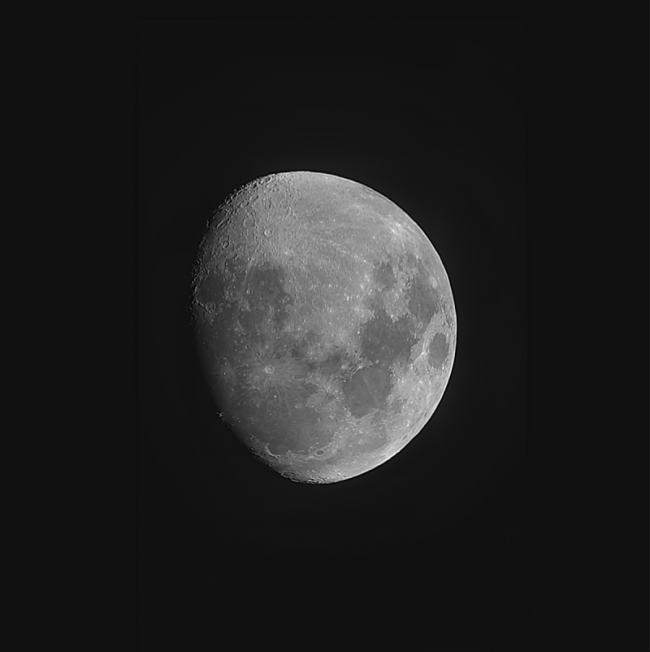 Bottom line: A new study showed that – whether you live in a rural or urban environment – your sleep patterns may be affected by the full moon. On the nights leading up to full moon, people fall asleep later and sleep less overall.