New study reveals final days of a child, 800 years ago

The researchers examined burial soil, at spots where the child’s major organs would have been situated, to understand the child’s final days. 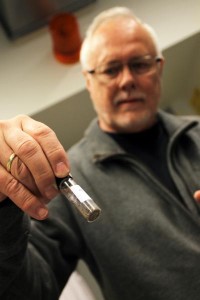 In medieval Denmark, a pre-teen child passed away, and was buried in the town of Ribe. Eight hundred years later, chemists have learned more about this child’s final days by analyzing soil samples in burial remains. Their research uncovered evidence that the child had been seriously ill and received a large dose of medicine in the form of mercury, in a desperate attempt to save his or her life.

Professor Kaare Lund Rasmussen, a chemist at the University of Southern Denmark, and his colleagues, reported on a novel technique to detect non-local chemical traces in ancient graves that could shed light on the final days of a long-deceased person. They published their findings about the Ribe child in the journal Heritage Science and announced the results in an August 9, 2013 press release, in which Rasmussen said:

I cannot say which diseases the child had contracted. But I can say that it was exposed to a large dose of mercury a couple of months before its death and again a day or two prior to death. You can imagine what happened: that the family for a while tried to cure the child with mercury containing medicine which may or may not have worked, but that the child’s condition suddenly worsened and that it was administered a large dose of mercury which was, however, not able to save its life. 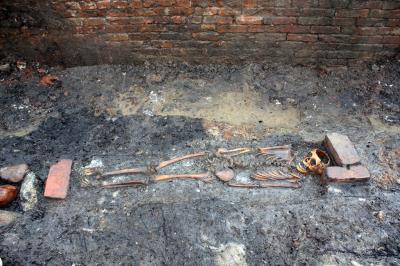 Remains of a 10- to 13-year-old child from a medieval cemetery in Ribe, Denmark, dating back to about 1200-1250. Image credit: Sydvestjyske Museer.

Rasmussen and his colleagues have been working with archaeologists to study medieval burials in Denmark, and have so far gathered soil samples from 19 ancient graves for study. He elaborated on the conditions of the graves that allow modern chemists to draw conclusions about these deaths from centuries ago:

When the body decays in the grave a lot of compounds are released to the surrounding soil – by far most of them organic compounds. Also most of the inorganic elements are transformed to other compounds and later removed by the percolating groundwater throughout the centuries that follows. If we can localize an element in the soil in the immediate vicinity of the skeleton which is not normally found in the soil itself, we can assume that it came from the deceased and this can tell us something about how the person lived. We are not interested in death, but in the life before death.

Mercury, which is rarely found naturally in soil, is of particular interest to Rasmussen. It was used in some ancient cultures for various purposes, including medicine. While it’s possible to analyze ancient bones for the presence of mercury, bones only provide evidence of exposure for three to 10 years before death.

Organs, however, hold on to mercury over shorter intervals; in the lungs, for instance, mercury is excreted quickly. Rasmussen and his team were able to determine the amounts of mercury in the soil where major organs would have been situated. In that way, they could determine how long before death, on a timescale of days, the dose had been administered. 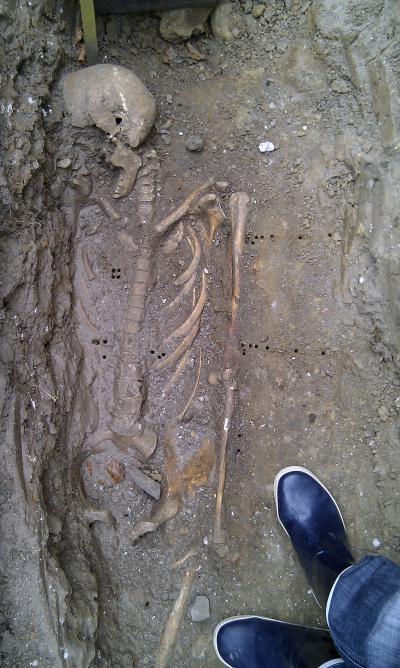 Holes in the soil show the positions of samples taken at a mid-way depth of the remains. The holes are placed in the position of the lungs, liver, kidney and the muscles of the upper arm.

At the position of a kidney, which is now completely decayed, compounds originally sitting in the kidney tissue are now part of the soil, if it has not been transported away by the groundwater. If there was mercury present in the kidney at the time of death it would have been transformed rapidly to mercury sulphide which is very immobile and undissolvable in water. So in this way we can obtain information about the deceased even though we do not analyze the bones.

When we found high mercury concentrations in the soil that had once been the lungs of the child, we could conclude that the child probably was exposed to mercury within the last 48 hours or so before its death.

Bottom line: A desperate attempt to save a pre-teen child, 800 years ago in medieval Denmark, was brought to light by chemists studying the child’s burial site. Professor Kaare Lund Rasmussen, a chemist at the University of Southern Denmark, led a team that found evidence that the child was treated with a high dose of mercury within two days of death. The team’s findings were based on the analysis of soil samples taken from locations around the skeleton that corresponded to major organs. The team found traces of mercury sulphide, a compound not found in the local soil, in samples taken at the location of the child’s long-gone lungs.