Scientists say they have found a total of 1,550 bones representing 15 individuals. They say it’s the largest fossil hominin find on the African continent.

On September 10, 2015, an international team of scientists announced the discovery of what they say is a new species of hominin – that’s the family of humans and their ancestors. Homo naledi – named for the cave in Africa in which it was found – was small creature with a tiny brain.

The Rising Star Cave happens to be in the Cradle of Humankind World Heritage Site outside Johannesburg, South Africa. Naledi means `star’ in the local South African language Sesotho.

Scientists say they have found a total of 1,550 bones representing 15 individuals. They say it’s the largest fossil hominin find on the African continent. 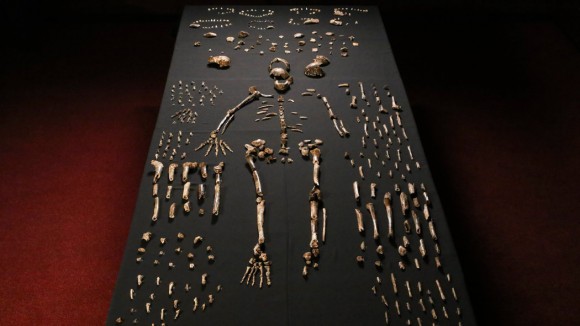 Pieces of a skeleton of Homo naledi, a newly discovered human species. Image via John Hawks/University of Wisconsin-Madison, via European Pressphoto Agency

We found adults and children in the cave who are members of genus Homo but very different from modern humans. They are very petite and have the brain size of chimpanzees. The only thing similar we know of are the so-called `hobbits’ of Flores Island in Indonesia.

Homo floresiensis or Flores Man was discovered in 2003. Like this latest finding, it stood 3.5 feet (about a meter) high and seems to have existed relatively recently, though the exact age is unknown. 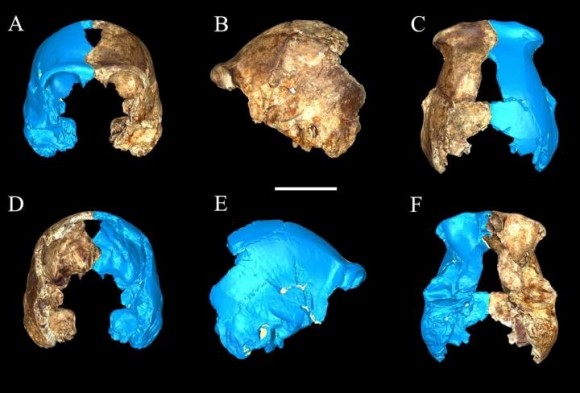 These are bone fragments of Homo neladi, a new species of hominin recently discovered in South Africa. Image via Charles Musiba

Caley Orr, an assistant professor of cell and developmental biology at the University of Colorado School of Medicine, analyzed the fossil hands. Orr said in the UC statement:

The hand has human-like features for manipulation of objects and curved fingers that are well adapted for climbing. But its exact position on our family tree is still unknown.

One of the most intriguing aspects of the discovery is that the bodies appear to have been deposited in the cave intentionally. Scientists have long believed this sort of ritualized or repeated behavior was limited to humans.

Getting inside the Dinaledi chamber of the remote cave system where the fossils were discovered was difficult. According to the New York Times:

Two local cavers, Rick Hunter and Steven Tucker, found the narrow entrance to the chamber, measuring no more than seven and a half inches wide. They were skinny enough to squeeze through, and in the light of their headlamps they saw the bones all around them. When they showed the fossil pictures to Pedro Boshoff, a caver who is also a geologist, he alerted Dr. Berger, who organized an investigation.

Lee Berger is a research professor in the Evolutionary Studies Institute at the University of Witwatersrand in South Africa. Berger said:

The chamber has not given up all of its secrets. There are potentially hundreds if not thousands of remains of H. naledi still down there.

The announcement coincides with the publication of two studies about the new species in the journal eLife, co-authored by Musiba and Orr.

In it, the researchers try to place Homo naledi in context with other species. Generally speaking, they said, there is an assumption that any new group of fossils must belong to an existing species.

But, they said, it’s not that simple here.

They said the study suggests that Homo naledi most closely resembles Homo erectus – an extinct species of hominid that lived throughout most of the Pleistocene geological epoch, between 1.9 million and 70,000 year ago – with its small brain and body size.

But, the researchers say, it also resembles Australopithecus, another extinct genus of hominids that lived between 4 million and 2 million years ago.

Complicating matters is the fact that researchers still don’t know the exact age of the fossil site. According to the study:

If these fossils are late Pliocene or early Pleistocene, it is possible that this new species of small-brained, early Homo represents an intermediate between Australopithecus and Homo erectus.

That would also make the new species very old.

But if the fossils are more recent, they theorize, it raises the possibility that a small-brained Homo lived in southern Africa at the same time as larger brained Homo species were evolving. Musiba said:

This raises many questions.How many species of human were there? Were their lines that simply extended outward and then disappeared? Did they co-exist with modern humans? Did they interbreed?

Homo naledi has a chest similar to a chimpanzee and hands and feet proportionate with modern humans, though with curved fingers. Musiba said:

They would have had great climbing ability. The oldest adults were about 45 and the youngest were infants.

He described poring over the bones late at night as akin to hitting a jackpot. He said:

You just didn’t want to go home because it was so exciting. I felt like a kid in a candy store.

Bottom line: On September 10, 2015, an international team of scientists announced the discovery of what they say is a new species of hominin, a small creature with a tiny brain. They found the new species – dubbed Homo naledi – in the Rising Star Cave outside Johannesburg, South Africa.

Read more from the University of Colorado, Denver