Mysterious skeleton is human, not alien

It turns out that this strange tiny skeleton is without a doubt human. 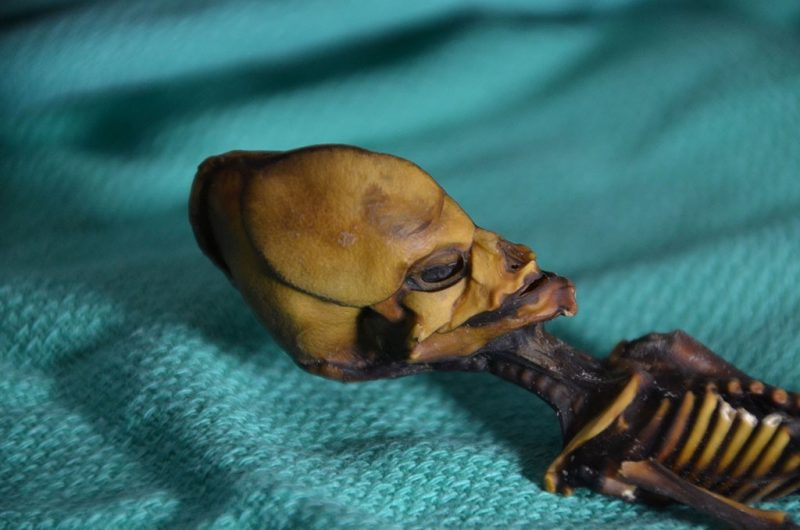 A bizarre, six-inch (15 cm) skeleton, discovered more than a decade ago in an abandoned town in Chile’s Atacama Desert, was once rumored to have extraterrestrial origins. But a new analysis, published March 22, 2018, in Genome Research, stamps out any remaining questions about the specimen’s home planet — it’s without a doubt an Earthly human.

After five years of genomic analysis, Garry Nolan, professor of microbiology and immunology at Stanford, and Atul Butte, director of the Institute for Computational Health Sciences at the University of California-San Francisco, have pinpointed the mutations responsible for the anomalous specimen. The researchers found mutations in several genes known to govern bone development. Some of these molecular oddities have never been described before. Butte said:

To me, it seems that when doctors perform analyses for patients and their families, we’re often searching for one cause — one super-rare or unusual mutation that can explain the child’s ailment. But in this case, we’re pretty confident that multiple things went wrong.

It’s an indication, he said, that looking for a single mutation, or even mutations that are already known to cause a particular disease, can discourage researchers from looking for other potential genetic causes and, in turn, potential treatments for patients. 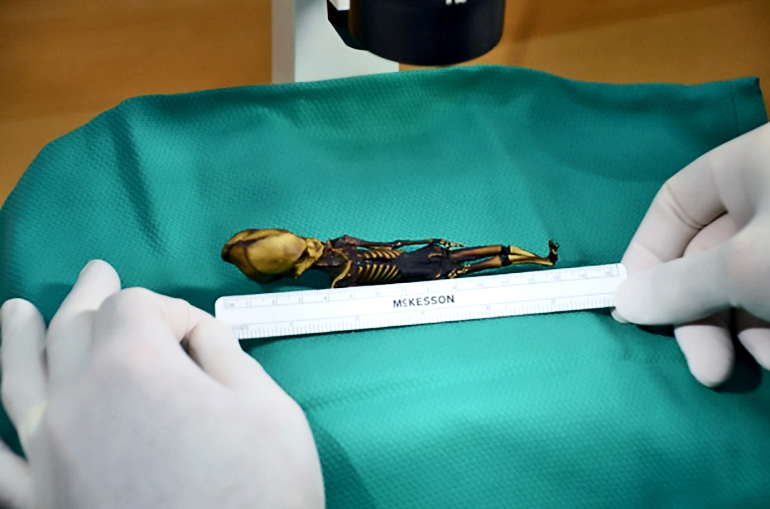 The 6-inch skeleton, nicknamed Ata, was discovered more than a decade ago in an abandoned town in the Atacama Desert of Chile. Image via Emery Smith/Stanford.

A human? A primate? An alien?

The skeleton, nicknamed Ata, was discovered more than a decade ago in an abandoned town in the Atacama Desert of Chile. After trading hands and eventually finding a permanent home in Spain, the mummified specimen started to garner public attention. Standing just six inches (15 cm) tall — about the length of a dollar bill — with an angular, elongated skull and sunken, slanted eye sockets, the internet began to bubble with other-worldly hullabaloo and talk of ET. Nolan said:

I had heard about this specimen through a friend of mine, and I managed to get a picture of it. You can’t look at this specimen and not think it’s interesting; it’s quite dramatic. So I told my friend, “Look, whatever it is, if it’s got DNA, I can do the analysis.”

With the help of Ralph Lachman, clinical professor of radiology at Stanford and an expert in a type of pediatric bone disease, Nolan set the record straight. Their analysis pointed to a decisive conclusion: This was the skeleton of a human female, likely a fetus, that had suffered severe genetic mutations. In addition, Nolan saw that Ata, though most likely a fetus, had the bone composition of a six-year-old, an indication that she had a rare, bone-aging disorder.

To understand the genetic underpinnings of Ata’s physicality, Nolan turned to Butte for help in genomic evaluation. He accepted the challenge, running a work-up so comprehensive it nearly rose to the level of patient care. Butte noted that some people might wonder about the point of such in-depth analyses. He said:

We thought this would be an interesting exercise in applying the tools that we have today to really see what we could find. The phenotype, the symptoms and size of this girl were extremely unusual, and analyzing these kinds of really puzzling, old samples teaches us better how to analyze the DNA of kids today under current conditions.

New insights through an old skeleton

To understand the genetic drivers at play, Butte and Nolan extracted a small DNA sample from Ata’s ribs and sequenced the entire genome. The skeleton is approximately 40 years old, so its DNA is modern and still relatively intact. Moreover, data collected from whole-genome sequencing showed that Ata’s molecular composition aligned with that of a human genome. Nolan noted that 8 percent of the DNA was unmatchable with human DNA, but that was due to a degraded sample, not extraterrestrial biology. (Later, a more sophisticated analysis was able to match up to 98 percent of the DNA, according to Nolan.)

The genomic results confirmed Ata’s Chilean descent and turned up a slew of mutations in seven genes that separately or in combinations contribute to various bone deformities, facial malformations or skeletal dysplasia, more commonly known as dwarfism. Some of these mutations, though found in genes already known to cause disease, had never before been associated with bone growth or developmental disorders.

Knowing these new mutational variants could be useful, Nolan said, because they add to the repository of known mutations to look for in humans with these kinds of bone or physical disorders.

For me, what really came of this study was the idea that we shouldn’t stop investigating when we find one gene that might explain a symptom. It could be multiple things going wrong, and it’s worth getting a full explanation, especially as we head closer and closer to gene therapy. We could presumably one day fix some of these disorders, and we’re going to want to make sure that if there’s one mutation, we know that — but if there’s more than one, we know that too.

Bottom line: According to a new analysis, a bizarre, six-inch (15 cm) skeleton, once rumored to have extraterrestrial origins, is a human female.