Cancer rates are twice as high in an Appalachian community exposed to mountaintop removal mining as in a non-mining control community, according to a new study, published July 26, 2011, in the peer-reviewed Journal of Community Health. Led by Dr. Michael Hendryx of West Virginia University, the study suggests that nearly 60,000 cases of cancer in the eastern United States can be directly linked to this mining method. Hendryx cited high levels of uterine and ovarian, skin, urinary, bone, brain, and other forms of cancers in the region.

Hendryx studied residents near the Coal River Valley’s mountaintop removal operation in West Virginia and contrasted results to non-mining areas of Appalachia. The results of his study were based on a health survey of 769 adults. The survey was conducted door-to-door in the spring of 2011, in Boone County, West Virginia.

Contaminated water from a mountaintop mine. Image Credit: iLoveMountains.org

Dr. Hendryx says his work on mountaintop mining and cancer corrects for age, gender, smoking, occupational exposure, and family cancer history, but it’s unclear whether the study corrects for drinking and being overweight.

Mountaintop removal is a controversial mining practice associated with the eastern United States – places like rural Kentucky, Tennessee, Virginia and West Virginia. In order to get to coal seams buried inside the Appalachians, mountain summits or summit ridges are physically removed. In the process, contaminants like arsenic, diesel, and benzene can find their way into local air, water and soil.

Hendryx’s previous work has been controversial. According to the blog Kentuckians For the Common Wealth (KFCW):

Hendryx published a controversial study in 2009 that found better health and greater economic prosperity in Appalachian counties with no coal mining than in those with coal mining operations. He and a co-author concluded in that study that the costs of illness and premature death outweigh the economic benefits of the coal industry.

A National Mining Association–commissioned an analysis of that 2009 study suggested that it had failed to consider the effects of obesity, diabetes and alcohol consumption. Hendryx countered by calling for an analysis that was not funded by the industry and was, like his study, peer-reviewed. 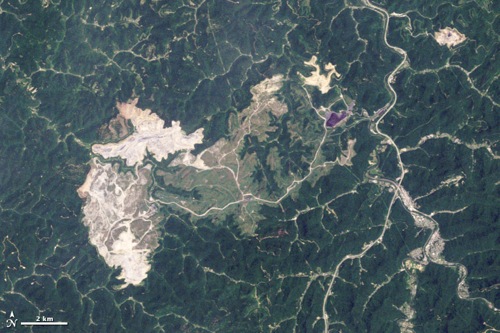 In his more recent study, Hendryx also made preliminary findings about high levels of coal-related contaminants in Appalachia’s water and air, especially contaminants known to be linked with the forms of cancer proliferating in his part of the country.

While mountaintop removal mining remains a federally sanctioned activity, laws pertaining to it are becoming more stringent. This, according to a blog written by Berkeley law professor Holly Doremus on July 25, 2011:

After a three-and-a-half month delay for White House review, EPA has finalized its guidance for review of mountaintop removal mining permits in Appalachia. I needn’t have worried that the White House would roll EPA Administrator Lisa Jackson on this one. The final guidance maintains the strong stand EPA took last April, when it issued the interim guidance it finalized today.

The thrust of this final version, like the interim guidance, is that EPA will actually exercise its oversight authority to make sure that permit decisions follow the law. That hasn’t exactly always been the case for mountaintop-removal mining, or really for many Clean Water Act permits.

Bottom line: with regard to mountaintop removal mining in the United States, there appears to be bad news, health-wise, and some sort-of good news, environment-wise. Only time will tell how important Dr. Hendryx’s July 2011 study on cancer chalks up to be, and also how much of a dent the EPAs finalized mining guidelines will make in the well-being of Appalachians.

Over one million Americans live in communities in central Appalachia that are impacted by mountaintop removal.

The end of cheap coal

Christopher Flavin on the future of nuclear power