Brewer’s yeast and beyond; meet your microbial bartenders.

Plenty of U.S. states have official state birds, and flowers, and even minerals. But Oregon, ever the trailblazer, is poised to become the first with an official state microbe. And they’ve picked a winner; Saccharomyces cerevisiae, the yeast responsible for many of our favorite alcoholic beverages. Oregon selected the microbe as a tribute to its many beer breweries, but Saccharomyces cerevisiae is also used in everything from cider to wine to whiskey. According to Popular Science the bill to make the yeast Oregon’s microbial mascot passed the state house in a 58-0 vote and now just needs senate approval. Good for them.

But what about the remaining 49 states? Sure there are microbes that are important to human health and medicine and all that, but wouldn’t you rather have a microorganism that contributes to your happy hour enjoyment? Well fear not, I’ve found some options…

Ever wished your favorite beer had more of a “leather” or “horse stable” flavor to it? Probably not, but then beers made with yeasts of the genus Brettanomyces are said to be an acquired taste. Like Saccharomyces cerevisiae, “Brett”, as the yeast is affectionately called by brewers, converts sugars to ethyl alcohol (aka ethanol) and CO2 by the process of fermentation. It also produces some rather non-traditional flavors. Seen as a problematic contaminant in many beers (and wines), Brett is nevertheless welcomed into the fermentation tanks of certain Belgian and Belgian inspired beers, and is employed by the more adventurous home brewers (Brettanomyces yeasts are difficult to kill, so there’s always the risk that your home made Brett beer will be a bad influence on the rest of your brewing operation). Because Brett excels at consuming sugar, it tends to yield dry beers. It can also be utilized in the production of my new favorite drink, the “sour beer”, which we’ll discuss in a minute. You have a few species to choose from here; Brettanomyces bruxellensis, B. lambicus, and B. claussenii seem to be the most popular of the beer-brewing Bretts. But that still leaves 46 states in need of microbial matchmaking, so let’s continue shopping.

Buttery Chardonnay and sour beer, brought to you by bacteria

With all the focus on fermentation, it’s easy to forget that the sugar-to-ethanol conversion isn’t the only chemical reaction going on in beer and wine making. One oft overlooked step is “malolactic fermentation”, which doesn’t generate alcohol but instead converts one type of acid into another. This may sound unimpressive, but the process can have a major impact on the flavor and “mouthfeel”* of wines. Here’s the gist – wine contains malic acid, a 4-carbon molecule that we perceive as rather tart. Malic acid isn’t a byproduct of yeast fermentation, it’s a natural component of the grapes, particularly those grown in colder climates. Grapes can be sour, what are you going to do? Enter lactic acid bacteria (LAB). These guys rearrange the components of malic acid into the more mellow 3-carbon lactic acid (kicking out some additional CO2 from that extra carbon in the process) which results in a smoother texture. I first heard of this in an explanation of what makes gives some white wines their “buttery” quality. Personally, I have nothing nice to say about buttery Chardonnays, but apparently malolactic fermentation isn’t limited to mucking up the acidity of a perfectly good crisp white. It occurs in red wine too, often spontaneously, and can allegedly improve flavor complexity and stability and so forth. It’s a bit of wine jargon, but I’ll take the experts’ word for it and cut the LABs some slack. Oenococcus oeni is a major microbe involved in malolactic fermentation, along with species of Lactobacillus and Pediococcus. 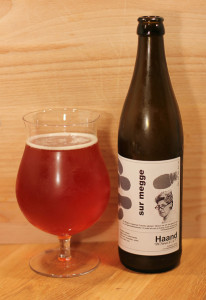 Not the same brand I had, but similar in color. Image: Christer Edvartsen.

But wait there’s more. LAB, particularly species of Lactobacillus, can also benefit beer production. In this case instead of yielding a less acidic product, they increase acidity. That’s because LAB don’t just convert malic acid into lactic acid, they can also make sugar into lactic acid, or sugar into lactic acid + ethanol and CO2 (such a versatile microorganism!). Throw some Lactobacillus into your “wort” (unfermented beer), perhaps with a dash of the previously mentioned Brett yeast, and the microbes will get to work making you a batch of sour beer. As, um, research for this article I procured some Flemish sour ale and it was surprisingly delicious. Well, at least I thought so. My boyfriend and partner in beer research didn’t finish his glass (hey, more for me). The beer was reddish in color, low in foam, markedly tart, and generally awesome. Though I should perhaps caveat my praise by mentioning that I’m not especially fond of most beers, tend to favor acidic beverages, and that as a child I occasionally drank the brine from jars of pickles. 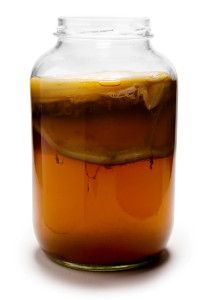 Somewhere that last disclosure I should have added that I also enjoy kombucha, a fermented tea with a tendency to polarize public opinion. In addition to the beverage’s vinegary taste, kombucha haters are frequently put off by the digusting, mushroom-looking blob tasked with the fermenting. The slimy pancake-shaped mass goes by the acroyn SCOBY, which stands for symbiotic culture of bacteria and yeast. After a couple weeks of snuggling with the SCOBY, sweetened tea is transformed into a drink with a high acidity and very little alcohol. What transpires in the spooky reaches of the kombucha jar? Well, yeast (including but not limited to our friend Saccharomyces cerevisiae) perform their standard fermentation, converting sugar into alcohol (and CO2, of course, giving kombucha a slight effervescence) but acetic acid bacteria take it from there, turning freshly made alcohol into acetic acid. Acetobacter xylinum is the prodimant species, but the SCOBY can house a diverse medley of bacteria. It’s not surprising that kombucha comes across as vinegary; acetic acid bacteria are also used to make vinegar. Of course all the bacterial alcohol consumption results in a drink so low in booziness that it barely qualifies for inclusion in this article. Though this can easily be remedied by mixing it with vodka.

So yeasts like Saccharomyces cerevisiae produce alcohol by fermentation, an impressive feat, but they can only make it from simple sugars, not from the complex starches of grains. Wine is no problem, as mashed grapes contain ample sugar. Beer works too, thanks to one of its components – barley. Splash some water on barley, and it begins releasing enzymes that break long starch molecules, or polysaccharides, into fermentation-ready sugars. (This process is called “malting”, and you can read more about the wonders of barley and other booze-yeilding plants in Amy Stewart’s book The Drunken Botanist.) Rice, unfortunately, doesn’t come equiped with its own starch disassembling kit. And yet sake, the delicate “rice wine” you order with your sushi, still exists thanks to a microbe called Aspergillus oryzae. The mold, nicknamed “koji”, is spread onto steamed rice to loosen it up for yeast fermentation. It’s kind of like that idiom “when they made you they broke the mold”, except in the case it’s, “when they made you, sake, they broke your polysaccharide bonds with mold, thus making yeast fermentation possible.” Catchy, no? 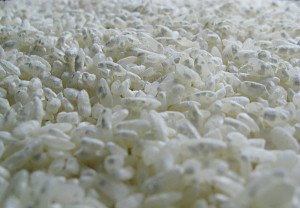 Koji isn’t just a lowly apprentice breaking chemical bonds so that Saccharomyces cerevisiae can work its magic, it also contributes to the flavor of the sake. (Plus it’s used to make two of the most essential food seasoning ingredients out there; miso and soy sauce.) And to those who might say, “What kind of North American state elects some Japanese sake mold as its state microbe?” please be reminded that beer and wine didn’t originate here either. My current residence of Austin is also home to the Texas Sake Company (apparently Texas produces a lot of rice) so perhaps I’ll write my elected officials about Aspergillus oryzae after I finish this post.

A bit of a strain

While Saccharomyces cerevisiae is the primary yeast species used in beer making, it isn’t one uniform organism. There are hundreds of strains of yeast available, and each adds its own unique flavor to the finished product. To get a sense of the of diversity of brewing yeasts, I spoke to BJCP National Judge and home brewer David Keller. He explained that, when making alcohol, yeast produce other by-products as well; ester and phenols for instance, which can add fruity and spicy notes. Along with the choice of hops and malt and even water, specific yeast strains help determine the taste, aroma, and texture of beer. A strain that is ideally suited for one kind of beer may be only so-so for another. This is why smaller craft breweries often produce a higher number of excellent beers than larger operations; they’re more likely to carefully match a particular strain of yeast to each beer, rather than relying on a few versatile strains to work with every item in their catalog.

When broken down to strains, there are more than enough Saccharomyces cerevisiae to go around. Hey, each state can have two if they want. Although the naming could get a bit messy. Strain numbers vary with yeast producers, and your microbe will have to be addressed as, “WLP099 Super High Gravity Ale Yeast” or “2112 California Lager™.” Still, it beats Bacillus anthracis.

* Despite sounding throroughly creepy, “mouthfeel” is proper industry terminology for addressing the texture of wine. Even spellcheck accepts it, so I suppose we’ll have to as well.