She was an outstanding mathematician and first woman to receive the prestigious Fields Medal. Maryam Mirzakhani died on July 14 after a several-year battle with breast cancer. 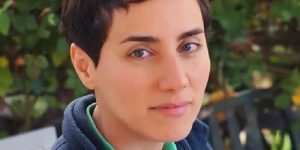 Maryam Mirzakhani, the first and to-date only woman to win the Fields Medal in mathematics. Image via Stanford University.

On Friday, July 14, 2017, noted mathematician Maryam Mirzakhani passed away to cancer at the age of 40 at Stanford Hospital in California. She had been fighting breast cancer since 2013. The disease progressed to other organs in 2016. Mirzakhani is known to have made many penetrating comments about math, like this one:

You have to spend some energy and effort to see the beauty of math.

I don’t have any particular recipe [for developing new proofs] … It is like being lost in a jungle and trying to use all the knowledge that you can gather to come up with some new tricks, and with some luck you might find a way out.

Maryam Mirzakhani was born in Teheran, Iran on May 3, 1977. She often said she felt lucky to have grown up in a time when her country was stable enough to allow her to focus on her studies. She dreamt of becoming a writer but, in 1994, won the gold medal for Iran in the International Mathematical Olympiad. In 1995, she won the gold in math with a perfect score.

Upon graduating from Sharif University, Teheran, Mirzakhani began attending Harvard University, where she was mentored by Curtis McMullen, a Fields Medal recipient. She obtained her PhD in 2004. Her thesis on hyperbolic geometry was said to be a masterpiece. In it, she solved two complex problems and presented an unexpected link between them. Curtis McMullen said of her work:

Her work opens new frontiers of research that are just starting to be explored. She approaches new mathematics with fearless ambition.

Soon after receiving her doctorate, she became assistant professor at Princeton University and a research fellow at Clay Univeristy. In 2008, she began teaching at Stanford University.

Watch a recording of one of Mirzakhani’s classes at Stanford.

Mirzakhani’s work focuses on, but is not limited to topics in algebraic geometry such as moduli spaces,  Riemann surfaces, and hyperbolic geometry. Hyperbolic geometry involves studying complex surfaces that have the shape of a Pringles crisp that close up to form multi-dimensional doughnut-like shapes. Although her work is highly theoretical, it has applications in many domains in physics such as String Theory.

If you have some background knowledge in math, you might be interested in becoming more familiar with Mirzakhani’s work by watching this introduction.

To date, she is still the first woman to ever receive the Fields Medal. She inspired and encouraged others to pursue mathematics in the beauty of her work.

Maryam Mirzakhani is survived by her husband Jan Vondrak, their daughter Anahita, and other family members.