Martin Hilbert: All human information, stored on CD, would reach beyond the moon

If a single star is a bit of information, there’s a galaxy of info for every person on Earth, says the first-ever inventory of our info capacity.

How much information is there in the world? Enough that, if we put all the information we have on Earth on CD-ROMs, that stack of CDs would reach beyond the moon. That’s according to a team of scientists who published the first-ever inventory of the world’s capacity to store, communicate, and compute information – including numbers, sentences, images, and texts – in the Feb. 10 issue of Science Express. 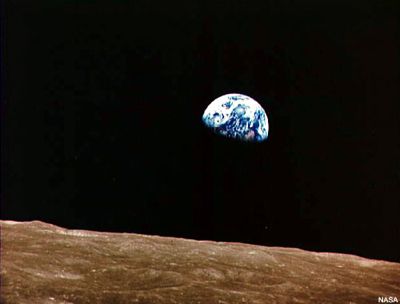 Dr. Martin Hilbert of the Annenberg School for Communication at the University of Southern California led the team, working with Priscila López Pavez at the University of Catalonia in Santiago, Chile. EarthSky spoke to Dr. Hilbert earlier this week. He told us his goal was to figure out how much human information could potentially be out there. To do it, he used over 1,000 sources that told him how much data storage capacity exists across the globe. The results?

* If a single star is a “bit” of information, there is a galaxy of information for every person in the world. That’s 315 times the number of grains of sand in the world, but still less than one percent of the information that is stored in all the DNA molecules of a human being.

* 2002 could be considered the beginning of the digital age, the year in which worldwide digital storage capacity overtook total analog capacity. As of 2007, almost 94 percent of our memory is in digital form.

* In 2007, humankind successfully sent 1.9 zettabytes of information through broadcast technology such as television and GPS. That’s equivalent to every person in the world reading 174 newspapers every day.

* On two-way communications technology, such as cell phones, humankind shared 65 exabytes of information through telecommunications in 2007, the equivalent of every person in the world communicating the contents of six newspapers every day.

* In 2007, all the general-purpose computers in the world computed 6.4 x 10^18 instructions per second. That’s the same general order of magnitude as the number of nerve impulses executed by a single human brain. Doing these instructions by hand would take 2,200 times the period since the Big Bang.

* From 1986 to 2007, the period of time examined in the study, worldwide computing capacity grew 58 percent a year, ten times faster than the United States GDP.

Dr. Hilbert told EarthSky that he spent four years tabulating data from his 1,000 sources. He and his team believe that we humans have now created about 295 exabytes of information. (1 exabyte = 1 billion gigabytes. A new laptop typically can store about 120 gigabytes – a number followed by 18 zeroes.) Martin Hilbert said:

These numbers that we found are very large and difficult to comprehend.

No kiddin’! But, Hilbert said, there are ways to think about 295 exabytes of information. For example, there’s the Earth-to-moon analogy mentioned above: all the information on Earth on CD-ROMs would reach beyond the moon. If you put the same information in books, those books would spread over every square inch of the United States, in 13 layers. These are huge numbers. But, said Hilbert, by quantifying the world’s capacity to process information, we also understood that these orders of magnitude are very small, compared to what nature does.

In other words, he said, nature is even better than we humans are at storing information. Who would have imagined otherwise? Consider, for example, our DNA, the famous double helix that acts as an instruction booklet for our cells. Each human DNA molecule can have millions of “letters” made of nucleic acids, which build proteins, which make our bodies work. In that way, DNA is a little like a computer chip.

Those technological devices, he said, include all paper, all hard disks, all x-rays, and all Google servers. So, nature has designed us with more “data” floating around inside of us than all our human computer chips put together.

Dr. Hilbert also observed that, even though we’re still a lot smarter than computers, computers are catching up.

Biology and biological evolution and what we are, that’s very impressive to say how much information we can store in our brain, and how many nerve impulses we can do per second. However, as impressive as evolution is, it is also incredibly slow.

In other words, our DNA and brains have been this smart for tens of thousands of years. But computers get smarter – way smarter – almost by the day.

We asked him what exactly he thinks will happen when computers get as good (or at least as fast) at processing information as humans. He said we don’t need to worry. And, also, that it’s hard to imagine just what the future might bring. But it’ll be exciting, he thinks.

I don’t think anything big will happen. Computers and people don’t do the same thing. Just because two things have the same level of computational power doesn’t mean computers are as intelligent as people. But it’s amazing to think that technology could one day be on a par with what the big master – Mother Nature – is doing. Computers allow us to do things. We couldn’t do without them. And they’re growing at this rate which will create scenarios we can’t even imagine yet, in the next 100 years.

So scientists have estimated how much information there is in the world – and created a first-ever inventory of our human capacity to store, communicate, and compute information. Right now in 2011, our human information, placed on CD-ROMS, would reach beyond the moon. It makes you wonder how far that imaginary stack of CDs will stretch a decade, or a century, from now.