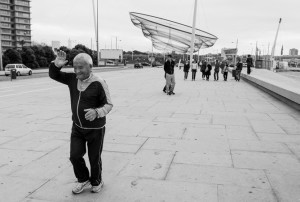 An old man runs along the beach path, when a group of man, with around the same age, start to scream from a car. They were screaming as if cheering from some athlet racing in a competition, the runner sees them and raises his hand with a big smile.

Thank you! Your submission has been received!
Oops! Something went wrong while submitting the form.
END_OF_DOCUMENT_TOKEN_TO_BE_REPLACED