The myths behind the southern and northern lights

For millennia, humans have viewed the northern and southern lights – aurora borealis and aurora australis – and created myths and folklore to explain the dancing lights they saw in the sky. 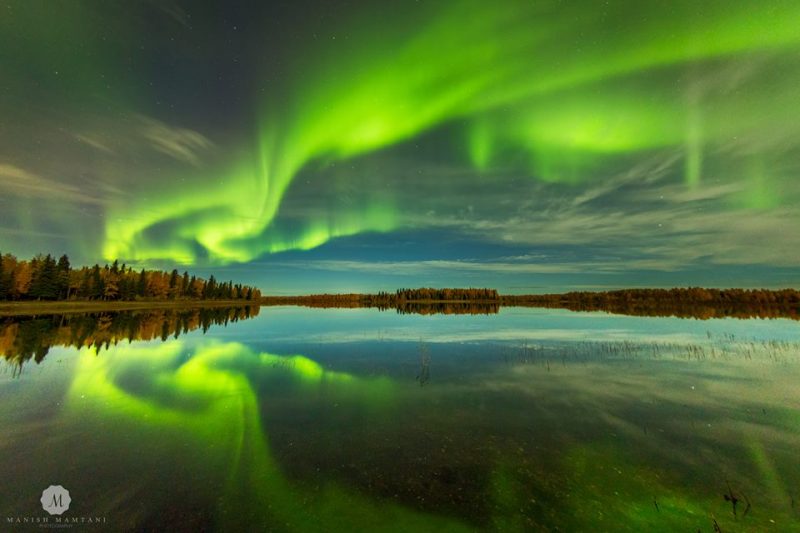 Throughout human history, people have witnessed the aurora, both the northern and southern lights, and sought to explain and make sense of these dancing patterns in stories and myths.

In the modern world, science has revealed most of the secrets of the northern lights (aurora borealis) and southern lights (aurora australis). We understand that auroras form when solar particles collide with Earth’s upper atmosphere. Larger solar storms cause a greater influx of particles, which can cause auroras to reach lower latitudes and appear to a greater number of observers. The colors of the aurora are determined by which gases are excited by the solar plasma.

All this scientific knowledge slowly started accumulating more than 2 1/2 centuries ago. But even now, when we look up at the trembling curtains of red, green or blue, a feeling of awe and mystery can pervade this ghostly show. It’s easy to see how many of these centuries-old myths referred to an otherwise unreachable world.

The folklore begins with the name “aurora” itself. Aurora is the Roman goddess of the dawn. The lights, usually starting as a subtle brightening on the northern horizon (in the Northern Hemisphere), appeared to be an out-of-place and untimely arrival of morning. 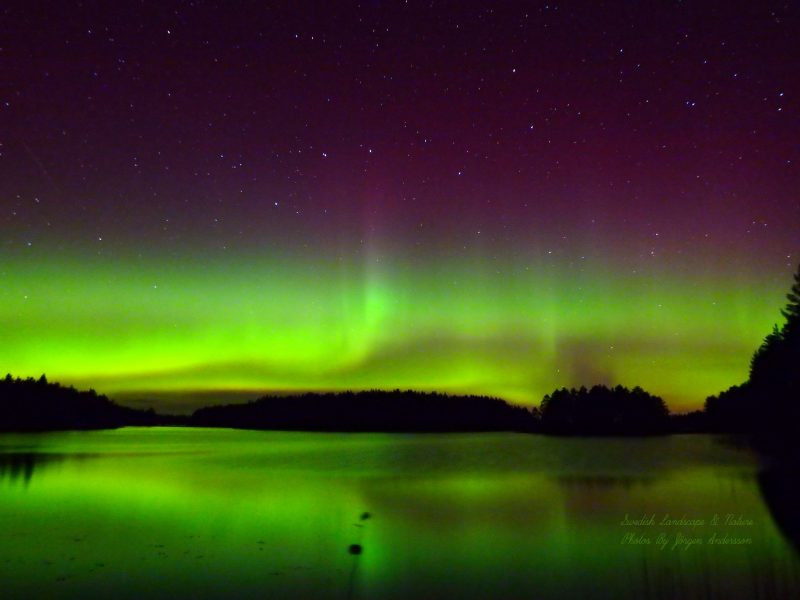 Tying the mystical lights to gods was an easy step for early cultures. The Algonquins on Manitoulin Island in Lake Huron thought an aurora was a sign of good will from their creator, Nanahbozho. The Chuvash of Siberia believed the aurora borealis was their heaven god helping women in childbirth.

One of the most common legends surrounding the northern lights concerned those who have passed into the Great Beyond. The people of the Six Nations Confederacy believed the northern lights showed the entry point to the Land of the Souls. The Vikings thought auroras were reflections from shields of the Valkyries, maidens who take dead warriors to Valhalla (heaven). The Salteaus of Eastern Canada and the Kwakiutl and Tlingit of southeastern Alaska all saw dancing souls in the flickering sky, sometimes of humans and sometimes of animals such as whales or seals. East Greenland Inuits viewed the lights as children who died at birth. In contrast to the many myths surrounding those who have passed on, the Lakota Sioux interpreted the lights as spirits of generations yet to be born. 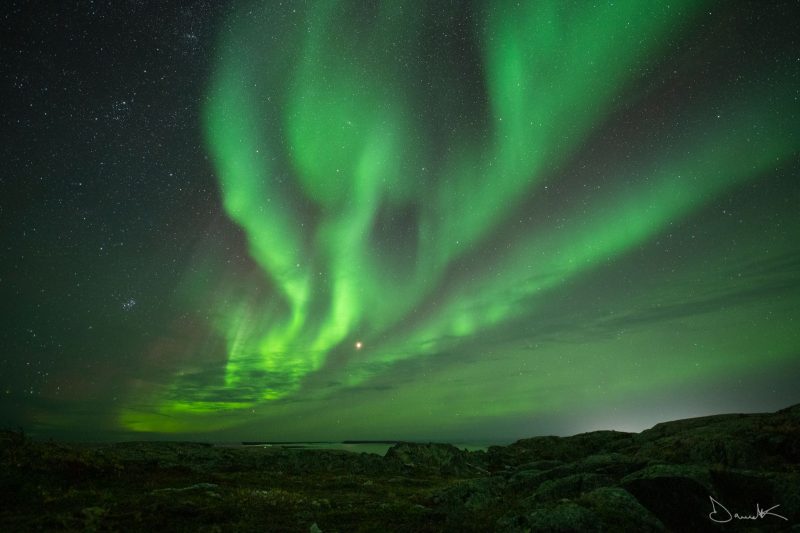 View at EarthSky Community Photos. | David Kakuktinniq at Rankin Inlet, Nunavut, Canada, captured the aurora borealis and Mars on September 12, 2020. He wrote: “Northern lights over the Hudson Bay, with Mars near the center of the image.” Thanks, David!

Violence and war frequently made an appearance in these myths. The Sami people of northern Scandinavia believed that the souls of those who died a violent death made up the energy of the northern lights. Fox Indian tribes of Wisconsin feared the lights as ghosts of their slain enemies, trying to rise up again. For this reason, auroras were regarded as an omen of war and pestilence.

Another predominant story found in aurora myth involved games played with balls. Many Inuits’ myths involve the dead playing ball with a walrus head. The Wabanaki of Maine had a story of ball-playing people who had peculiar-colored lights on their heads and rainbow belts that resulted in the aurora.

Tying various animals to the lights was common around the world. Some Scandinavian people from medieval times saw the flickering lights and believed them to be caused by gigantic schools of herring in the sea, the light of their shimmering bodies reflected into the sky. One Finnish myth claims that foxes made of fire flung sparks into the air with their tails. Spotting the northern lights in China is less common, but a myth still evolved that these displays were the result of fire-breathing dragons. 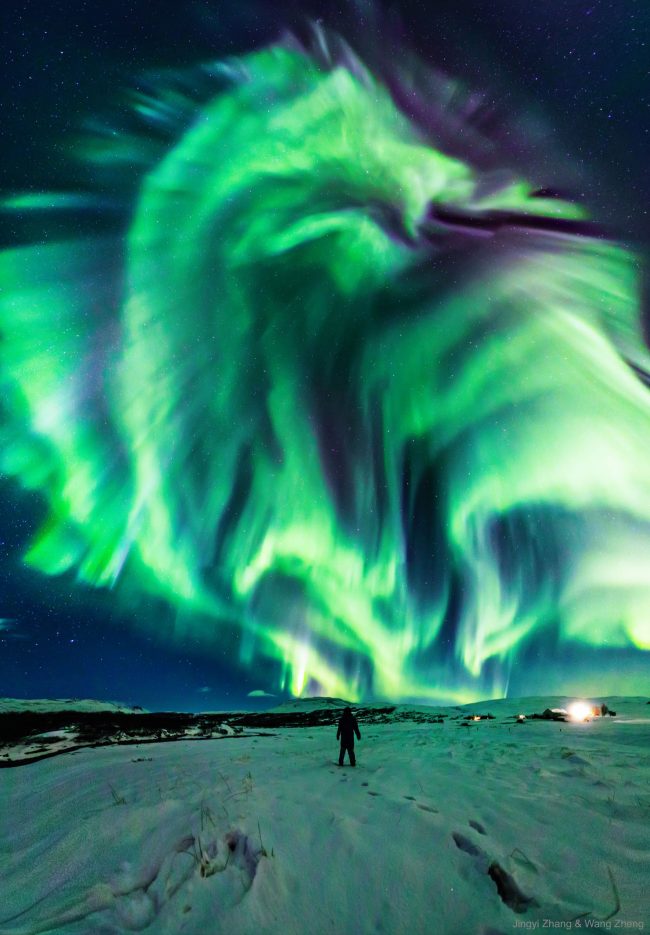 The production of these lights was often blamed on mysterious groups of people who lived beyond the horizon. The Mandan of North Dakota told stories of people in northern nations using giant stew pots to simmer their dead enemies, the reflections of which were cast upon the sky. In Washington state, the Makah people also saw fires of those in the far north, only they spoke of a tribe of dwarves boiling blubber. Menominee Indians of Minnesota and Wisconsin thought the auroras were torches of friendly northern giants used in spearfishing at night. The Maori of New Zealand interpreted their glimpses of the aurora australis as reflected light from torches or campfires from previous generations who had traveled south and settled there.

Sometimes the northern lights figured into part of the weather forecast, as in the Penobscot of Maine believing an aurora foreteold windy weather. In Scotland, auroras are called “merry dancers.” Some believed that the quick motions of the dancers meant unsettled weather, while slow and graceful movements foretold favorable weather.

While we no longer blame auroras for a turn in the weather, they are a part of space weather. The sun can unleash a geomagnetic storm at any time, triggering another round of magnificent auroral displays. Watch the next event and decide for yourself what the lights mean to you.

Bottom line: For millennia, people have viewed the southern and northern lights and created their own myths and folklore explaining the dancing lights they saw in the sky.