They’re calling them pentaquarks. What you need to know of the latest discovery about the tiny particles that make up our world. 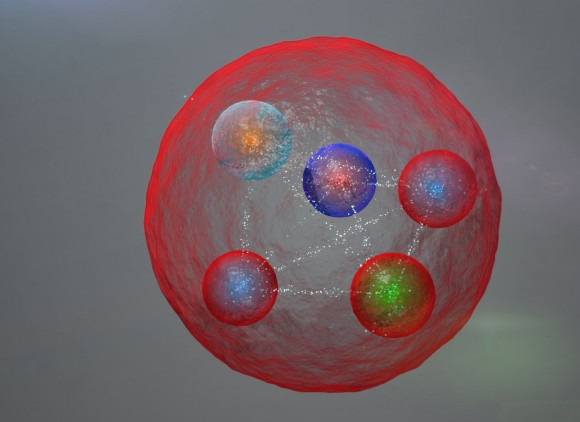 The Large Hadron Collider, famous for finding the Higgs boson, has now revealed another new and rather unusual particle. Teams at the LHC, the world’s largest particle accelerator, recently began a second run of experiments using far more energy than the ones that found the Higgs particle back in 2012. But another of the groups, LHCb, have also been sifting through its data from the billions of particle collisions of the first run of the LHC, and now think they’ve spotted something new: pentaquarks.

Pentaquarks are an exotic form of matter first predicted back in 1979. Everything around us is made of atoms, which are mode of a cloud of electrons orbiting a heavy nucleus made of protons and neutrons. But since the 1960s, we’ve also known that protons and neutrons are made up of even smaller particles named “quarks”, held together by something called the “strong force”, the strongest known force in nature in fact.

Experiments in 1968 provided the evidence for the quark model. If protons are hit hard enough, the strong force can be overcome and the proton smashed apart. The quark model actually explains the existence of more than 100 particles, all known as “hadrons” (as in Large Hadron Collider) and made up of different combinations of quarks. For example the proton is made of three quarks.

All hadrons seem to be made up of combinations of either two or three quarks, but there is no obvious reason more quarks could not stick together to form other types of hadron. Enter the pentaquark: five quarks bound together to form a new type of particle. But until now, nobody knew for sure if pentaquarks actually existed – and, although there have been several discoveries claimed in the last 20 years, none has stood the test of time. 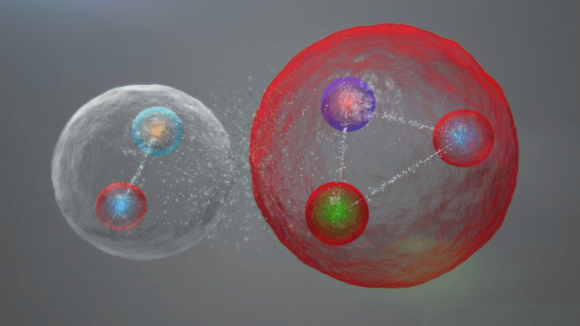 The intricate dance of the J/psi and the proton. Image credit: CERN

Pentaquarks are incredibly difficult to see; they are very rare and very unstable. This means that if it is possible to stick five quarks together, they won’t stay together for very long. The team on the LHCb experiment made their discovery by looking in detail at other exotic hadrons produced in the collisions and they way these break apart. In particular, they looked for the Lambdab particle, which can decay into thee other hadrons: a Kaon, a J/psi, and a proton.

The J/psi is made of two quarks and the proton is made of three. The scientists discovered that for a short period of time these five quarks were bound together in a single particle: a pentaquark. In fact, through detailed analysis of the data, they actually discovered two pentaquarks and have given them the catchy names Pc(4450)+ and Pc(4380)+.

Why is this important?

The discovery answers a decades-old question in particle physics and highlights another part of the mission of the LHC. Discoveries of new fundamental particles such as the Higgs boson tell us something completely new about the universe. But discoveries like pentaquarks give us a more complete understanding of the rich possibilities that lie in the universe we already know.

By developing this understanding, we may get some hints about how the universe developed after the Big Bang and how we’ve ended up with protons and neutrons instead of pentaquarks making up everyday matter.

With the LHC now colliding protons at almost twice the energy, scientists are ready to tackle some of the other open questions in particle physics. One of the main targets with the new data is Dark Matter, a strange particle which seems to be all around the universe, but has never been seen. Testing the current understanding of quarks, the strong force and all the known particles at this new energy is an essential step towards making such discoveries.

Gavin Hesketh is Lecturer in Particle Physics at UCL.