The first map shows all the known asteroids within one-third of Earth’s distance from the sun today – Asteroid Day – June 30, 2016. Look below for a second map. 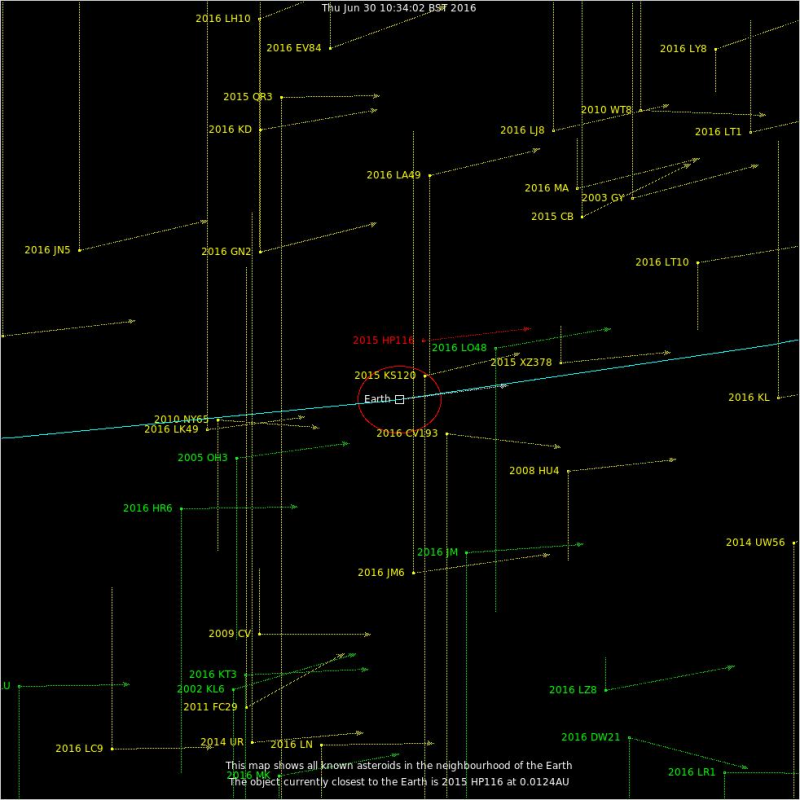 The map above shows near-Earth space on June 30, 2016. It shows all the objects within 0.3 AU of Earth – that’s 45 million kilometers – or about 30 million miles – or about one-third of the distance between us and the sun – today. The red oval around Earth represents 3.84 million kilometers, or 10 lunar distances.

Read more about the first map, above, here.

Want to see more of the solar system? Try the map below, also from Armagh Observatory. It shows the orbits of the inner planets – Mercury, Venus, Earth and Mars – as the blue ellipses around the sun (the yellow dot at the center). The planets themselves are cyan or white squares. The Earth is highlighted “because of its special importance to us,” Armagh explains. 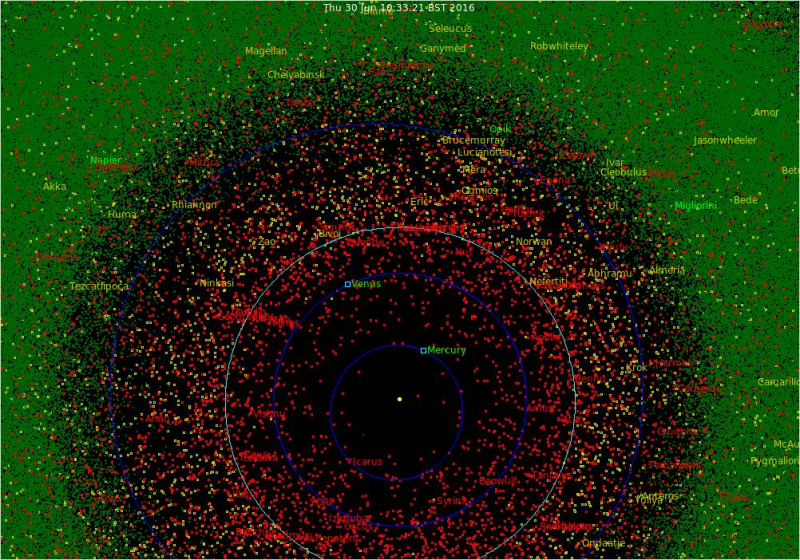 Finally the red boxes mark the location of the Apollo and Aten asteroids. These cross the Earth’s orbit and are the most directly identifiable astronomical threat for the near future.

It is estimated that there are perhaps 100,000 to 1,000,000 undiscovered asteroids on similar Earth crossing orbits.

Read more about the second map, above, here.

Are these maps scary? Yes, and no. Asteroid impacts to Earth’s surface do occur, which as the Tunguska event of 1908, whose anniversary is today and which is the reason Asteroid Day is scheduled for June 30.

However, one thing to remember here is that the maps are not to scale, with respect to the sizes of the dots representing the asteroids, and the space in between them. Space, even the near space just outside our little Earth-moon system, is very vast. We could not see the asteroids on a map this size, if they were depicted relative to the reality of the vastness of space.

Also, look at these maps. We know about a lot of asteroids. It’s the ones we don’t know about that worry astronomers. They’re confident they know all the potentially Earth-destroying-sized asteroids, and they know none are headed our way for the foreseeable future. It’s the smaller asteroids they’re still not sure about, the ones that could strike on or near a large city and do a lot of harm.

Finally, today we know that fairly large asteroids do strike our atmosphere several times each year. Data released in 2014 by the Nuclear Test Ban Treaty Organization, which operates a network of sensors that monitors Earth continuously for the infrasound signature of nuclear detonations, showed that, as of 2014, there had been 26 atom-bomb scale impacts to our atmosphere since the year 2000. Nearly all of those passed unnoticed because our atmosphere did its job … and kept us safe.