When it comes to flight delays and cancellations, the main culprit is the weather, says NASA’s John Murray. He talked about satellites help make it possible to produce better forecasts for a variety of different aviation hazards.

When it comes to flight delays and cancellations, the main culprit is the weather, according to atmospheric scientist John Murray of NASA’s Applied Sciences Program. He said Earth-orbiting satellites are helping scientists understand clouds, aerosols, and atmospheric chemistry, all of which play a role in creating Earth’s weather and climate. Better understanding leads to better forecasts for a variety of hazards associated with air travel, from icing to turbulence to thunderstorms. Dr. Murray spoke with EarthSky’s Jorge Salazar.

What are the biggest weather-related problems that affect air travel?

When we woke up this morning [Jan. 27, 2011], the U.S. Northeast was experiencing a large winter storm. As you know, these storms have brought the tri-state area almost to a standstill as far as air travel is concerned.

This airplane lost an engine due to turbulence. Photo credit: John Murray

And it just so happens that convective weather or thunderstorms during the summer – and these strong winter storms – are the primary cause for air travel delays and flight cancellations. These storms are one of our big challenges. A top priority right now is to improve convective weather forecasts, to have a better understanding of exactly what the physics is within convective clouds. Why do some clouds seem to grow while others don’t, even though the conditions may look very much the same? Satellites can give us insights that show that really isn’t necessarily the case.

The basic research that NASA does is incorporated into the production of better forecasts for a variety of different aviation hazards. It might be icing or turbulence or thunderstorms. By incorporating satellite-based applications into convective weather forecasts, you can make significant improvements in the forecasts. These might be related, for example, to the intensity and location of thunderstorms, or heavy precipitation and other factors that are normally associated with strong storms. The information is issued by the National Weather Service in the forms of different types of advisories or warnings. And that information is used by the airlines to route their aircraft most effectively.

Tell us about in-flight icing. How is NASA’s Applied Sciences program helping both commercial and private aircraft to prevent icing?

When a small general aviation aircraft flies through one of these clouds, it essentially becomes the nucleation surface for all the super-cooled water. So you get a very rapid build-up of a layer of ice on the aircraft. Icing is a phenomenon that’s very dangerous for small general aviation aircraft. It’s one of the leading causes of incidents among them. There’s a lot of concern about icing, both at the FAA and in the aviation community. It’s very difficult for any single type of technology to detect areas of the atmosphere where in-flight icing can occur.

The challenge is to find these areas of super-cooled liquid water and to try to measure the concentration of water that we’re detecting. Aircraft are really good at doing it, but that’s not really the preferred way to find these areas. Satellites have proven to be particularly effective, because we can look at the properties of a cloud with a satellite. Whether it’s liquid or water or gas that we’re dealing with, we can see what the temperature is. So we know that if it’s super-cooled, and we can also infer the diameter of the droplets. That helps us know what kind of an impact it would have on an aircraft.

What is NextGen, and how is NASA involved in it?

So the idea behind NextGen, essentially, is that we’re going to need to accommodate much higher capacity for air travel. We’re going to have to put more planes in smaller areas. The system is, at this point, operating near its capacity. We prove that each time there’s a winter storm. If you have any kind of disruption, it just cascades through the system. You lose the ability to meet the demands on the system. So if you were to double, or triple, the number of airplanes that need to occupy that same airspace … well, you can see what the problem would be.

As part of this team, NASA – and specifically the Applied Sciences Program – is helping to improve the weather information we have and to develop a NextGen weather system so that so that we’ll be able to more precisely locate all of the aviation hazards that exist. We’ll be able to operate aircraft safely in higher density airspace. In other words, we’ll be able to put airplanes a lot closer together.

We’ll need significantly better information than we have now in terms of the location of storms, where the actual hazard areas are, and about the restrictions placed on that airspace system because of those hazards. It’s a fairly complex problem that we’re trying to solve, but NASA’s role through the applied sciences program is to try to ensure that we have the best information on convective weather and icing, turbulence, and other types of aviation hazards so that NextGen will be possible.

How else are Earth-observing satellites used to study the atmosphere?

We use Earth-observing satellites to study, for instance, cloud properties. That’s important because the satellite is able to tell us over a very large area exactly what’s happening within clouds. Scientists need this information in order to better forecast the weather and to better understand the climate. They’re looking at cloud properties such as the actual composition of the clouds, whether or not they’re ice clouds, gaseous clouds, or liquid water clouds, what the temperature of those clouds are, what physical processes are going on within those clouds.

Tell us about the instruments on the satellites, used to study clouds.

One that has provided us particularly exciting information over the last decade is an instrument called MODIS, the Moderate Resolution Imaging Spectroradiometer that flies on our Terra and Aqua satellites. That imager has enabled us to look at clouds with much more detail than we ever had been able to do so before. So we’ve been able to produce applications specifically for the imager that help us to understand the dynamic processes in the cloud much better. 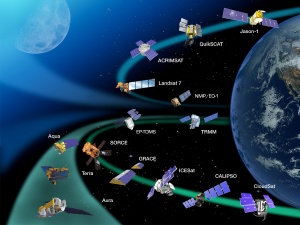 We have satellites like our CALIPSO satellite, which flies the lidar, which is a lot like radar. However, it uses reflective laser light as opposed to reflected radio energy to basically determine the characteristics of the aerosols and clouds and their distribution in the atmosphere. So we can learn a lot of additional information by looking at the lidar data.

And third, we study atmospheric chemistry with a number of satellites. One of the most exciting ones for scientists, one of the most useful tools that we’ve recently flown, is the OMI instrument, which is the Ozone Monitoring Instrument on board our Aura satellite. With OMI we can better understand the atmospheric chemistry. We can look for sulfur dioxide from volcanoes. You can look at emissions of pollutants, different types of chemicals, chemicals that we call NOx and SOx which are nitrates and sulfate and their aerosols. And of course the primary purpose of the instrument is to study the behavior of the ozone layer. We monitor ozone depletion in the Antarctic region.

What’s the most important thing you want people today to know about NASA’s Applied Sciences Program?

For a number of years, scientists and public policy makers and the general public all have been very concerned that it’s been very hard – if not impossible – for a lot of really important basic science research to transition to real-world operations. There was a National Academy of Sciences report about a decade ago in which the Academy referred to this problem as the “valley of death.” Back in 2002, the NASA Applied Sciences Program was brought online basically to bridge that valley – to enable important basic research to transition, to make it into operations – bridging that “valley of death.” We’ve been very successful at that. We have important partnerships with the National Weather Service and the FAA and other agencies, and NASA Applied Sciences data and applications have clearly made a big difference.

Our thanks today to NASA’s Applied Sciences Program, working to discover and demonstrate innovative uses and benefits of NASA Earth science data and technology.