On September 6, 2012, the Toulouse-based company Airbus – one of the world’s leading aircraft manufacturers – released its vision for what flying will be like in 2050. Airbus says it encourages its engineers to “think widely and come up with `disruptive’ ideas which will assist our industry in meeting … 2050 targets.” Read about five innovative ideas from Airbus, below. 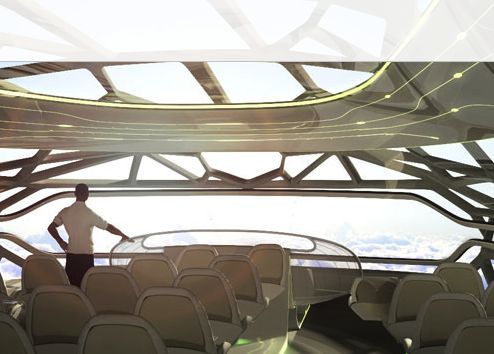 The future of flying? This is Airbus’ Concept Plane and Cabin, part of its vision for 2050. Image via Airbus.

Airbus says the technology already exists to fly shorter and more precise routes. The five concepts will get passengers from A to B quicker, it says, while helping the industry meet its target to halve CO2 emissions by 2050. Airbus’ Smarter Skies concepts are:

1. Aircraft launched into continuous ‘eco-climb’ — Assisted take-off using renewably powered, propelled acceleration, would see aircraft climb rapidly to their most efficient cruising altitude, reducing emissions and noise. As mega-cities become a reality and space becomes a premium, runways could be shortened to minimise land use. 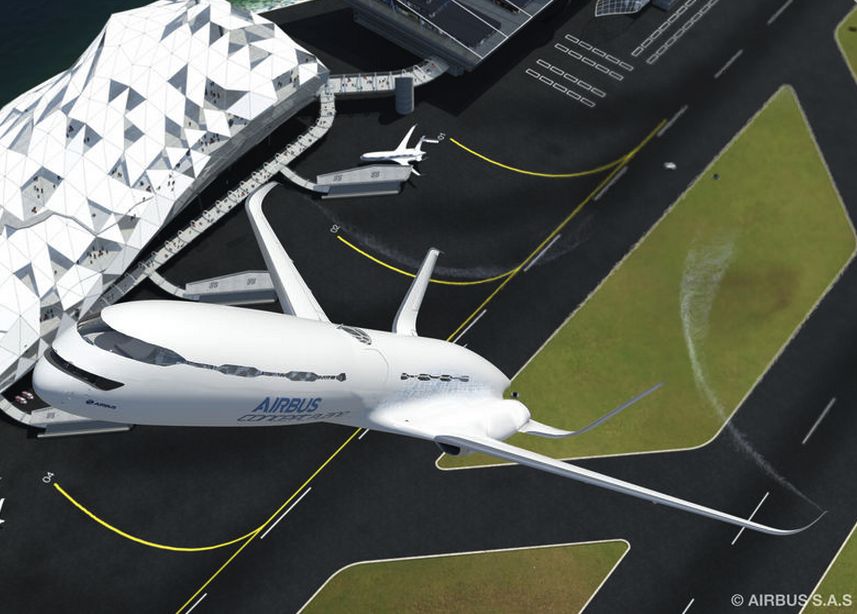 Airbus concept of the eco-climb, an assisted take-off using renewably powered, propelled acceleration. Airbus says this concept would include aircraft climbing steeply and rapidly to their most efficient cruising altitude, reducing emissions and noise. Click here to expand image. Image via Airbus.

2. Aircraft in ‘free flight’ and formation along ‘express skyways’ — Intelligent aircraft would be able to self-organise and select the most efficient routes (‘free flight’), making the optimum use of prevailing weather and atmospheric conditions. Planes could rendezvous in mid-air and flock like birds in formation to reduce drag and thus fuel consumption and emissions 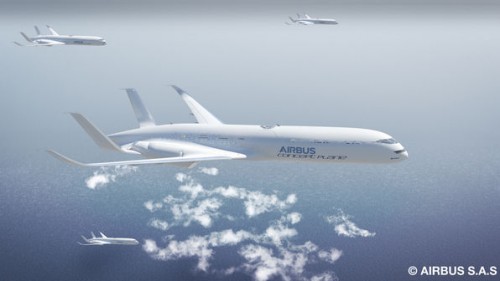 Airbus concept of planes of the future, flocking along express skyways. Image via Airbus.

3. ‘Low-noise’ glided approaches and landings — In descent, aircraft could glide smoothly into airports with engines running in idle, significantly reducing emissions and noise. Slower landing speeds would make shorter runways a viable possibility at both ends of the journey

5. Powering future aircraft and infrastructure — The use of sustainable biofuels and other potential alternative energy sources such as electricity, hydrogen and solar, will secure supply and further reduce aviation’s environmental footprint. This will allow the extensive introduction of regionally sourced renewable energy close to airports, feeding both aircraft and infrastructure requirements.

For more check out this post at Physorg. Or go directly to Airbus’ site.