We can’t observe brain activity of extinct human species. But we can observe modern brains doing things that our distant ancestors did for clues to how their brains worked. 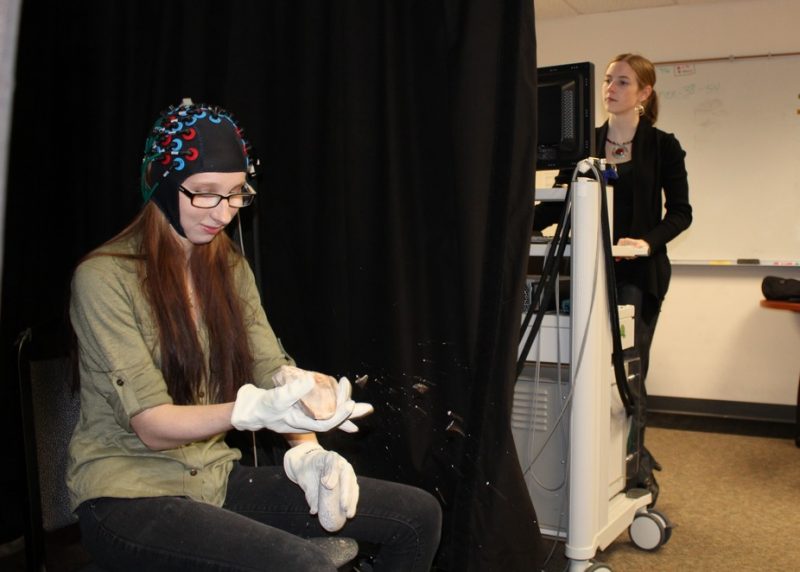 The stone flakes are flying, but what brain regions are firing? Image via Shelby S. Putt.

How did humans get to be so smart, and when did this happen? To untangle this question, we need to know more about the intelligence of our human ancestors who lived 1.8 million years ago. It was at this point in time that a new type of stone tool hit the scene and the human brain nearly doubled in size.

Some researchers have suggested that this more advanced technology, coupled with a bigger brain, implies a higher degree of intelligence and perhaps even the first signs of language. But all that remains from these ancient humans are fossils and stone tools. Without access to a time machine, it’s difficult to know just what cognitive features these early humans possessed, or if they were capable of language. Difficult – but not impossible.

Now, thanks to cutting-edge brain imaging technology, my interdisciplinary research team is learning just how intelligent our early tool-making ancestors were. By scanning the brains of modern humans today as they make the same kinds of tools that our very distant ancestors did, we are zeroing in on what kind of brainpower is necessary to complete these tool-making tasks.

The stone tools that have survived in the archaeological record can tell us something about the intelligence of the people who made them. Even our earliest human ancestors were no dummies; there is evidence for stone tools as early as 3.3 million years ago, though they were probably making tools from perishable items even earlier.

As early as 2.6 million years ago, some small-bodied and small-brained human ancestors chipped small flakes off of larger stones to use their sharp cutting edges. These types of stone tools belong to what is known as the Oldowan industry, named after Olduvai Gorge in Tanzania, where remains of some of the earliest humans and their stone implements have been found. 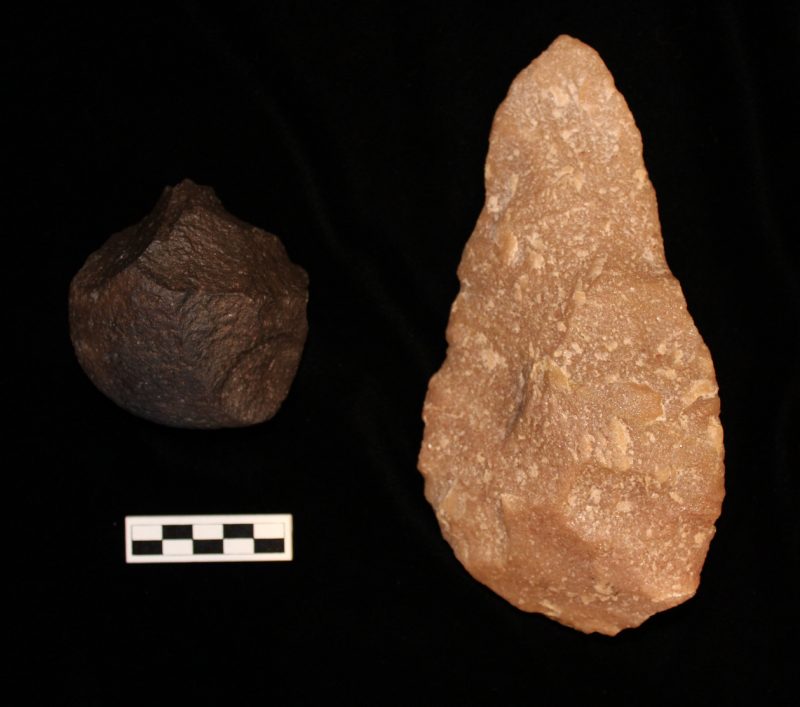 Around 1.8 million years ago, also in East Africa, a new type of human emerged, one with a larger body, a larger brain and a new toolkit. This toolkit, called the Acheulian industry, consisted of shaped core tools that were made by removing flakes from stones in a more systematic manner, leading to a flat handaxe with sharp edges all the way around the tool.

Why was this novel Acheulian technology so important for our ancestors? At a time when the environment and food resources were somewhat unpredictable, early humans probably began to rely on technology more often to access food items that were more difficult to obtain than, say, low-hanging fruits. Meat, underground tubers, grubs and nuts may all have been on the menu. Those individuals with the better tools gained access to these energy-dense foods, and they and their offspring reaped the benefits.

One group of researchers has suggested that human language may have evolved by piggybacking on a preexisting brain network that was already being used for this kind of complex tool manufacture.

So were the Acheulian toolmakers smarter than any human relative that lived prior to 1.8 million years ago, and is this potentially the point in human evolution when language emerged? We used a neuroarchaeological approach to answer these questions. 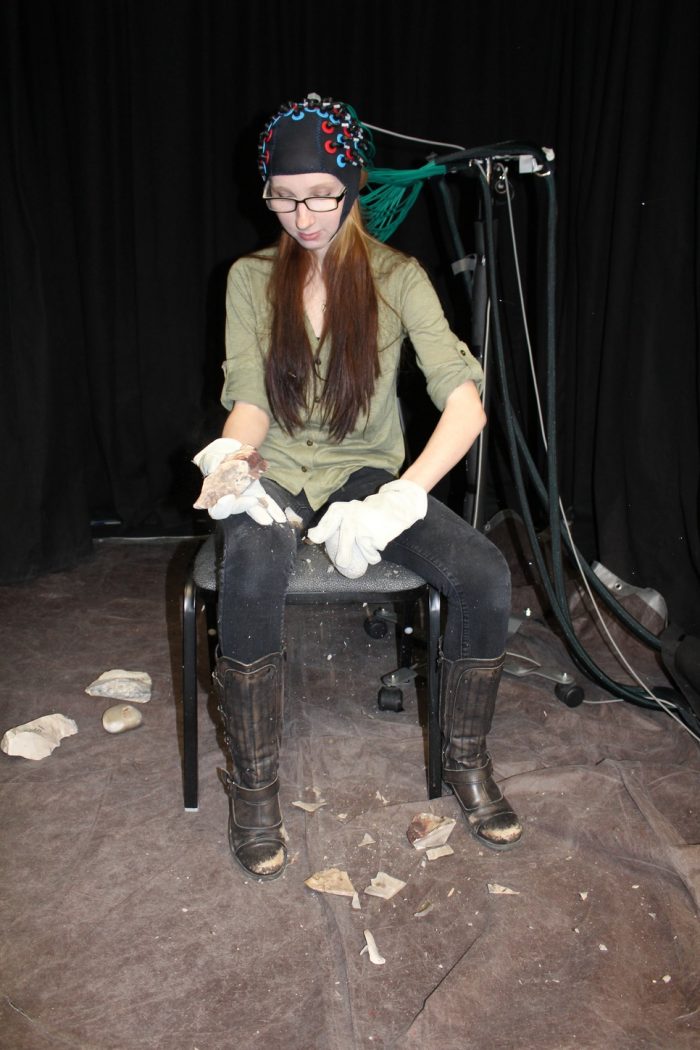 Participants in the study made stone tools while their brain activity was measured with fNIRS. Image via Shelby S. Putt.

My research team, which consists of paleoanthropologists at the Stone Age Institute and the University of Iowa and neuroscientists at the University of East Anglia, recruited modern human beings – all we have at our disposal these days – whose brains we could image while they made Oldowan and Acheulian stone tools. Our volunteers were recreating the behaviors of early humans to make the same types of tools they made so long ago; we can assume that the areas of their modern human brains that light up when making these tools are the same areas that were activated in the distant past.

Each of the subjects who participated in this study attended multiple training sessions to learn how to make Oldowan and Acheulian tools before going in for the final test – making tools while hooked up to the fNIRS system.

We needed to control for language in the design of our experiment to test the idea that language and tool-making share a common circuit in the brain. So we divided the participants into two groups: One learned to make stone tools via video with language instructions; the other group learned via the same videos, but with the audio muted, so without language.

If language and tool-making truly share a co-evolutionary relationship, then even those participants who were placed in the nonverbal group should still use language areas of the brain while making a stone tool. This is the result we should expect if language processing and stone tool production require the same neural circuitry in the brain.

During the neuroimaging session, we had the participants complete three tasks: a motor baseline task during which they struck two round stones together without attempting to make flakes; an Oldowan task that involved making simple flakes without trying to shape the core; and an Acheulian task where they attempted to shape the core into a handaxe through a more advanced flake removal procedure.

Areas of the brain that form the Acheulian cognitive network that are also active when trained pianists play the piano. Image via Shelby S. Putt,

The evolution of human-like cognition

What we found was that only the participants who learned to make stone tools with language instruction used language processing areas of the brain. This probably means that they were recalling verbal instructions they’d heard during their training sessions. That explains why earlier studies that did not control for language instruction in their experiment design found that stone tool production activates language processing areas of the brain. Those language areas lit up not because of anything intrinsic to making stone tools, but because while participants worked on the tools they also were likely playing back in their minds the language-based instruction they’d received.

Our study showed that people could make stone tools without activating language-related brain circuits. That means, then, that we can’t confidently state at this point that stone tool manufacture played a major role in the evolution of language. When exactly language made its appearance is therefore still a mystery to be solved.

It turns out that this Acheulian cognitive network is the same one that comes online when a trained pianist plays the piano. This does not necessarily mean that early humans could play Chopin. But our result may mean that the brain networks we rely on today to complete complex tasks involving multiple forms of information, such as playing a musical instrument, were likely evolving around 1.8 million years ago so that our ancestors could make relatively complex tools to exploit energy-dense foods.

Shelby Putt, Postdoctoral Research Fellow, The Stone Age Institute and The Center for Research into the Anthropological Foundations of Technology, Indiana University